Things are a bit more complicated than they seem when it comes to marine protected areas in NZ. The most commonly discussed type, marine reserves, are just the tip of the iceberg.

Marine reserves, mataitai reserves, taiapure reserves, voluntary closures, involuntarily catching no fish – it can be a bit confusing, particularly when there are multiple governing bodies in charge of our fisheries, all of which cite different legislations, acts and opinions. There is also the more provocative side of marine protected areas (MPAs). Are they even necessary? Should we have more? Who really should be in control of fishing restrictions?

Those questions are important and will be the subject of a future article – preferably one written when the fishing isn’t so hot – but before we even start to dig our teeth into those topics, it’s best we understand what types of MPAs we have in NZ and the rules for each area. 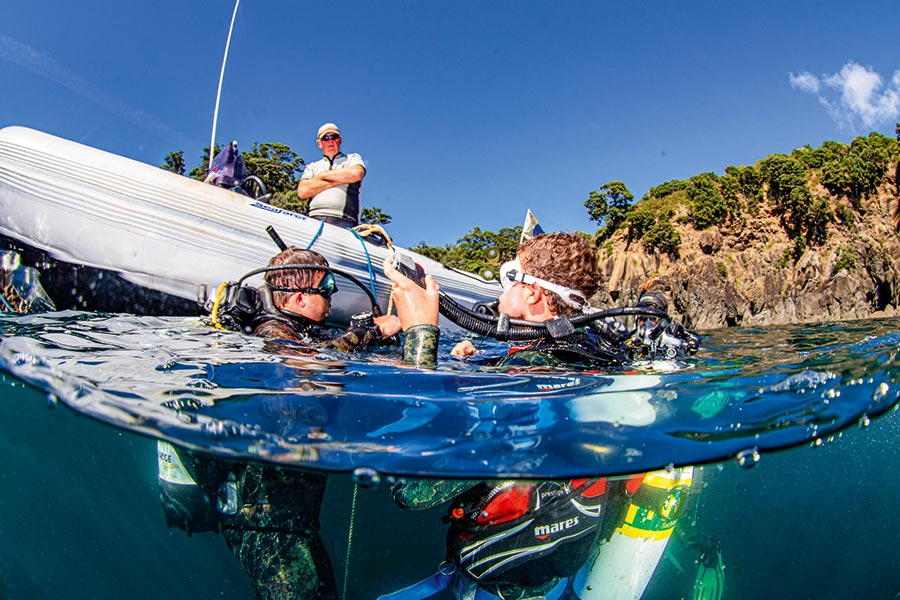 While you can't fish in marine reserves, they can provide some of the best diving in NZ.

Simply put, there are two main types of MPAs: Marine Reserve MPAs and ‘Other’ MPAs.

Unlike other types of MPAs, marine reserves are managed by the Department of Conservation (DOC) and established under the Marine Reserves Act. There are currently 44 marine reserves in NZ, ranging all the way from the Kermadec Islands to Stewart Island. Contrary to popular opinion, marine reserves are not a fisheries management tool, but rather a statutory tool established to preserve marine life for scientific study or conserve areas of particular biological significance or beauty.

The rules in marine reserves are relatively straightforward: don’t take anything you didn’t bring – and I mean anything. This includes not only all marine life but also shells, rocks and driftwood. Rocks and driftwood were news to me, and I’ll come clean and say I’ve definitely taken a stick or two home in my time camping at Tawharanui.

While the above is how you should treat all marine reserves you are unfamiliar with, certain reserves have exceptions. At the Hautai Marine Reserve off the South Island’s West Coast, for example, you’re allowed to collect stones under 256mm in diameter, shells, driftwood, sand and gravel by hand. Pounamu can also be collected by members of Ngai Tahu Whanui. A number of other marine reserves have exceptions of some kind, so it’s worth checking out the rules for any specific area you’re planning on visiting (these can be found on the MPI website).

One point of contention is what anglers should do if they’re dragged into a marine reserve while fighting a fish. If you, for example, hook a solid kingie on light gear at Cape Rodney just outside the Goat Island Marine Reserve but the fish bullies its way into the protected area, do you have to cut your line? 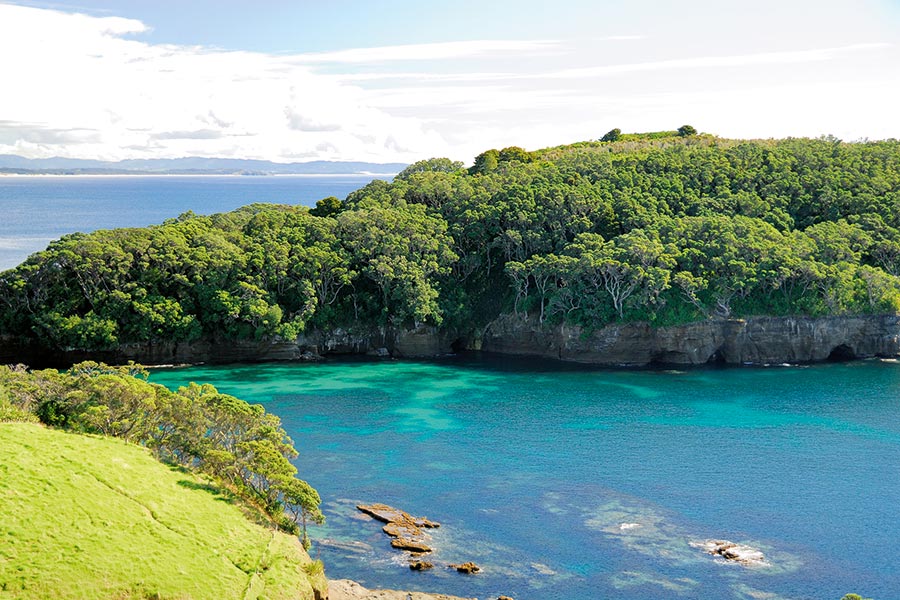 Te Hawere-a-Maki (Goat Island) is a fantastic place to see big snapper cruising in the shallows.

I asked this very question to DOC and this is what they had to say: “Generally speaking, fishing in a marine reserve is a strict liability offence and you need to take appropriate measures to ensure you don’t end up fishing in one.” This includes making sure you keep your distance when anchoring and drift fishing, and ensuring you have a reasonable buffer so fish don’t have the opportunity to drag you into a reserve.

They did note there can be “extraordinary circumstances,” such as someone playing a large marlin that takes a boat into a reserve. In order to avoid a potential fine or legal action, DOC advise that “the fisher should take steps to verify the fish was hooked outside the marine reserve.” This includes creating a waypoint of where the fish was hooked and recording a GPS track of the drift, taking photographs/video, having witnesses on board who can verify where and when the fish was hooked or using a VHF radio to communicate the hook-up location to a base station or other vessels in the vicinity (I’d recommend doing as many of the above as possible to bolster your case).

Another point I raised with DOC were the rumours I heard around certain marine reserves having different rules around this very issue – which is something they confirmed. For example, the Tuhua (Mayor Island) Marine Reserve allows anglers to play and land gamefish (billfish, shark and tuna) inside the reserve if they hooked the fish outside its borders. Unfortunately, there is no easy way to access this information. The only place I found it was in the fine print of the original marine reserve notice that’s issued when the reserve comes into effect. If you’re really keen, these can be found on the DOC website; otherwise, it’s best to play it safe.

So what can you do in marine reserves? Boat, kayak, dive, snorkel, swim and enjoy the sights. You can also anchor in reserves, but if you come across a rich piece of reef structure, you’re still best to avoid ripping a chunk out of it with your pick. 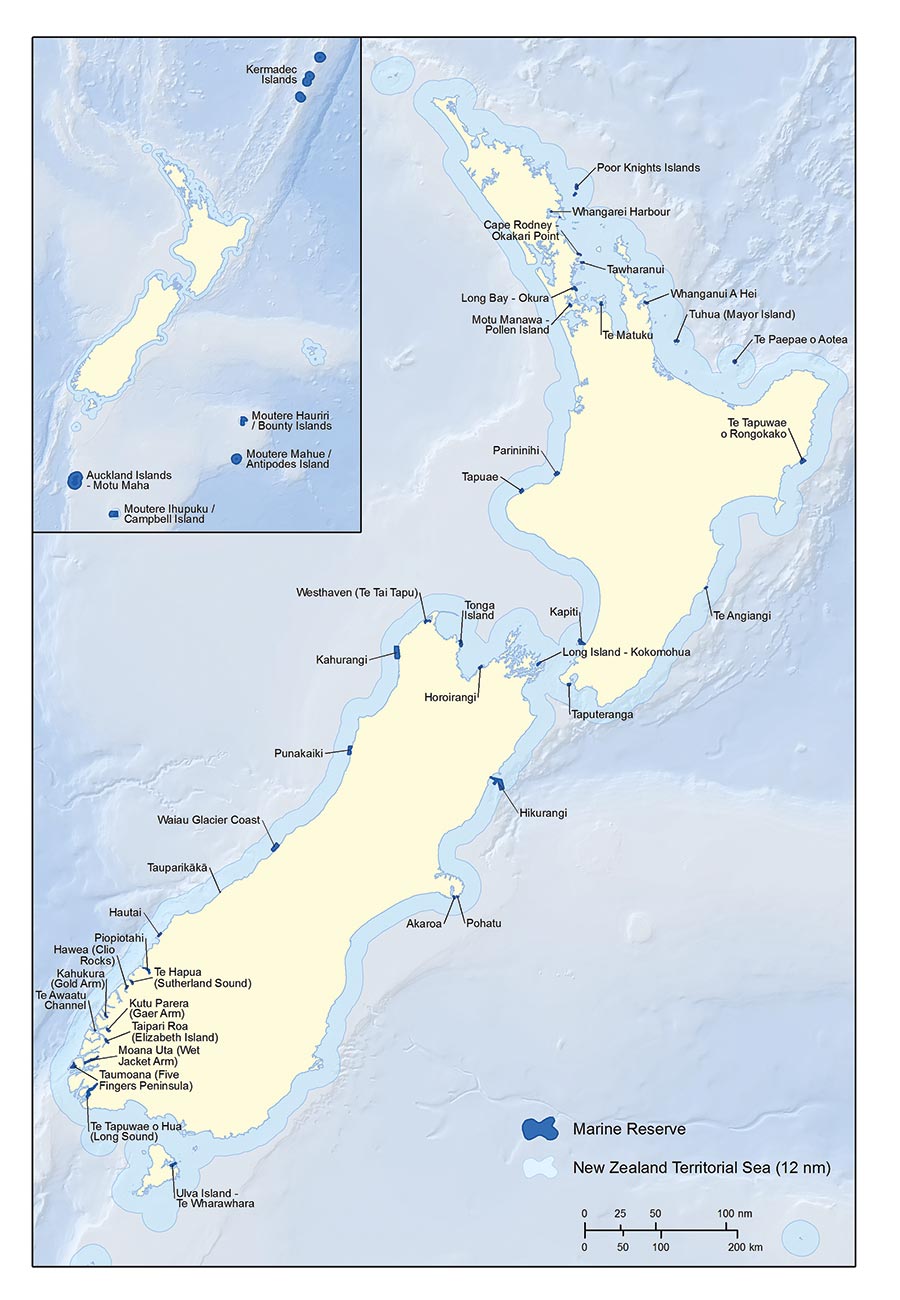 A map of NZ's marine reserves.

This is where things get slightly more complicated. ‘Other’ MPAs are established under a whole range of management tools and the restrictions vary between areas. The primary ‘management tool’ is the Fisheries Act, but the Submarine Cables and Pipelines Protection Act, Maritime Transport Act and, most controversially, the Resource Management Act all come into play (as well as a few others in specific contexts).

The idea behind these supplementary MPAs is that they provide enough protection from the effects of fishing for an area to meet the “MPA Protection Standard”. This standard takes into account the various adverse impacts of fishing on both biodiversity and the environment. As such, some MPAs allow recreational rod fishing but not commercial fishing, while others have complete fishing bans. 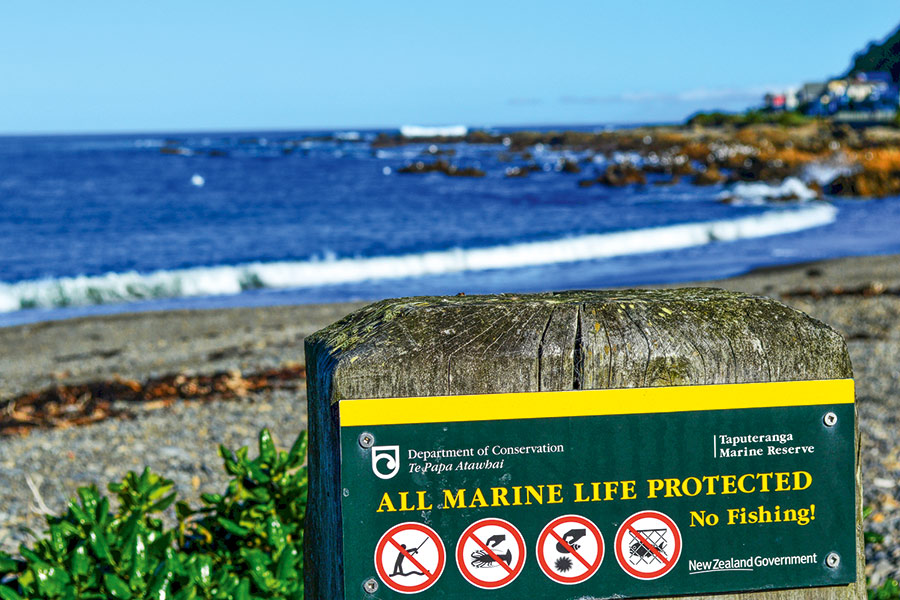 The signage to look out for. This one is found at Taputeranga Marine Reserve, Wellington.

The type of MPA that is most often in the headlines and probably has the most direct impact on recreational fishing is temporary closures – and it’s exactly as it sounds. The Fisheries Act allows the Minister to temporarily close an area in the North Island “only if he or she is satisfied that it will recognise and make provision for the use and management practices of tangata whenua in the exercise of non-commercial fishing rights by (a) improving the availability or size (or both) of a species of fish, aquatic life, or seaweed in the area subject to the closure, restriction, or prohibition; or (b) recognising a customary fishing practice in that area” (the South Island has its own provisions in the Fisheries Act which are very similar).

These closures may take a number of forms, but all restrictions prohibit the removal of at least one species. For example, Maunganui Bay’s current temporary closure applies to all fish species, aquatic life and even seaweed, the only exception being kina. In contrast, Umupuia Beach’s (Manukau) closure only applies to cockles. Currently, the total temporary closures in NZ covers approximately 769km2 across six sites, so head to the MPI website to find out the precise areas and restrictions for where you intend to fish.

While closures under the Fisheries Act are straightforward, more controversial closures may take place under the Resource Management Act in the very near future. The recent landmark decision to close three reef systems around Motiti Island to fishing is to be implemented as part of the Bay of Plenty Regional Council’s ‘Regional Coastal Environment Plan’. After a lengthy court process, which included stints in the Environment Court and the Court of Appeals, it was decided fishing controls can be implemented under the RMA and enforced by regional councils. While this temporary closure has not yet come into effect due to delays with other areas of the Regional Coastal Environment Plan, it’s just a matter of time. With rumours of other groups now wanting to close popular fishing areas under the RMA – bypassing the Fisheries Act and what we understood to be the standard (and just) process – a dangerous precedent has perhaps been sent. But I’m not going to get political. Let’s move on.

These reserves are developed and managed by tangata whenua. They can be implemented in areas “that recognise and provide for the special relationship between tangata whenua and their traditional fishing grounds.” However, they still have to be approved by the Minister and be implemented under the Fisheries Act.

In most mataitai reserves, commercial fishing is banned but recreational and customary fishing can continue as per normal – just the usual restrictions apply. The Mt Maunganui/Tauranga Harbour mataitai reserve is a prominent example of this. On a calm summer’s day, there will be boats anchored up and casting baits throughout this reserve. However, other mataitai reserves have restrictions specific to the area. For example, it is illegal to take any green-lipped, blue or black mussels from the recently established Te Puna Mataitai Reserve (Bay of Islands). Again, it pays to visit the MPI website before you drop a line.

Taiapure are areas deemed to have “special significance to iwi or hapu, as a source of food, or for spiritual or cultural reasons”. Once an application has been accepted to implement a taiapure in a given area, a local management committee is created to manage the fishing restrictions. While the management committee recommends these changes, the Minister of Fisheries still has to approve them. Taiapure fall under the same section of the Fisheries Act as mataitai reserves.

There are currently 10 taiapure in NZ and as the bylaws are different in every one, it is absolutely essential that you head to the MPI website and check out the specific restrictions for the area you intend to fish. In the Akaroa taiapure, for example, set netting is banned and there are different bag limits for a number of finfish.

These are more commonly known as ‘cable zones’ and they are a nuisance to every recreational fisherman. I don’t know what it is about these zones, but they somehow are irresistible to diving gannets. I’ve lost count of the amount of times that the only workups in the Hauraki Gulf (that I can find) have been bang smack in the middle of the cable zone which runs all the way from the inner gulf to out past Little Barrier and beyond.

Implemented under the Submarine Cables and Pipelines Protection Order 1992, every cable zone is a no fishing and no anchoring area. I’ve once seen 50-odd boats chase a workup into the cable zone behind Kawau Island, and I understand why some people take a more relaxed view of these areas (it’s just a big cable or pipe right?) – but if you’re the person who cuts internet to NZ because you sunk a hook into a cable, you’d probably say it wasn’t worth the couple of extra fish.

There are other types of MPAs less relevant to recreational fishermen I haven’t mentioned, not least marine mammal sanctuaries, marine parks, benthic protection areas and seamount closures – but these mostly restrict commercial fishing. If you’re interested in learning more about any of these areas, then just jump onto the DOC or MPI website where you’ll find plenty more information. 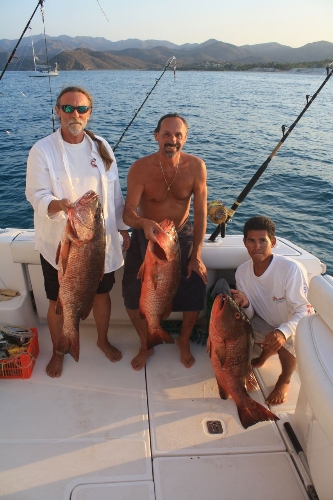