Murray Monds is a Waikato local who grew up fishing from trailer boats in the Coromandel region. Developing a taste for the marine lifestyle, he was later involved as factory manager, then in sales, for Sea Nymph Boats before spending 17 years skippering super-yachts up to 74 metres long in the Mediterranean, the Caribbean and on the east coast of America.

When Murray retired back in New Zealand, he deciding to set up a charter fishing business out of Raglan. To get a handle on the fine points of what was required, he worked a couple of seasons for Red Boats Charters in the Hauraki Gulf and then drove ferries out of Pine Harbour for Sealink while his charter boat was being built.

Choice of boat is very important when working out of a west coast harbour like Raglan with its notorious bar. Murray had had plenty of experience with RIB pontoon boats as super-yacht tenders and the stability and high level of reserve buoyancy decided him on this configuration, built in aluminium.

He liked the lines of Senator’s pontoon designs and as he was living near Auckland at the time, worked with his local Senator agent, Auckland Marine, who were happy to customise the fit-up and let the owner supply his own choice of outboards – in Murray’s case twin Honda VTEC BF150As.The finished product is the Senator RH770 Princess Moana now operating out of Raglan under the company name of Reel Action Raglan. The weld quality of the hull appears excellent with extra protection afforded to the pontoons by a heavy all-round rub rail, and along the keel line by an extra keel cap. The exterior finish is a full vinyl wrap in red. Sealed tread-plate decks drain to a sump under the transom and as required by survey, two 3000gph bilge pumps are fitted, one with a float switch and one manually operated.

Reserve buoyancy figures were not available at the time of writing, but you can bet they are substantial in a pontoon boat of this size. She is surveyed for 8+1, but Murray prefers a crew of no more than six. Although she is game-capable, bottom fishing and kingie jigging are the main endeavours.

Making an early start to beat the Auckland traffic, I drove down to Raglan where I met up with Senator Boats head Grant Simmonds, his mate Adam ‘Carpie’ Daniel, and owner Murray Monds.

Get up and go

Although the RH770 is rated for 150-250 hp, with crews of up to eight possible and bar crossings to deal with, Princess Moana is powered by twin Honda VTEC BF150As, turning 17-inch pitch props. The under-deck fuel tank holds about 315 litres and the fuel port is sited on the transom top. The fuel line is fitted with a surge chamber at deck level to prevent blow-back when filling, or ‘weeping’ from the breather with a full tank on a hot day.

The Honda four-strokes are smooth, quiet and economical to run. In smooth conditions, the maximum speed achieved was 37 knots (68.5 kph). See the table below for full performance figures.

One of the advantages of twin engines is the ability to get home unassisted if one engine should fail. As an extra safety margin, this rig has four batteries protected up inside the transom locker. Each outboard has a separate start battery, along with one house battery and one specifically for the radio (a survey requirement). All and any of the batteries can be linked in series by isolation switching.

In calm conditions inside the harbour with two adults on board, we found the boat could be lifted onto to plane by a single engine.

The Raglan bar was in reasonable shape – a metre or so of swell was running in the channel when we headed out – but the weather clagged in later and the sea had picked up to closer to two metres by the time we made the return journey.

Being in survey as a charter boat, this vessel is fitted with full safety equipment that would not necessarily be found on the average recreational boat, such as the life rings and RFD four-man liferaft on the roof. Starting at the pointy end, a fold-down boarding ladder is fitted as an integral part of the heavy-duty bow rails, making it easy to pick up or drop off passengers on a steep-to beach. An anchor is permanently mounted on the bowsprit while a Maxwell RC8-6 capstan does the heavy lifting and deposits the ground tackle through the foredeck into the anchor locker (which is also accessible through a hatchway in the forward bulkhead). The capstan is controlled from the helm position, with a second control on the forward bulkhead of the cabin. Access to the bow can be had around the cabin sides or through the forward hatchway.

The forecabin has 1.9m berths, and with the addition of a berth infill, can sleep three adults. A pipe-supported hammock provides a further berth, but is also useful to store gear, in this case lifejackets, ready to hand when not being used. There is stowage space under the berths and in a single side-shelf.

An electric toilet is fitted, with privacy, and also secure storage, provided by a sliding, lockable cabin door.

Out in the wheelhouse, three toughened glass panels ensure forward visibility. Each is fitted with its own Roca W12 wiper and separate switches. Side-sliders are also toughened glass, allowing ventilation along with vision. A large dash with a dark marine carpet-lined tray, back-lip and two sets of 12V and USB chargers, provides a useful spot for odds and ends. It is supplemented by two sub-dashes, a glovebox and three small sheltered shelves per side. There is no shortage of grabrails either. 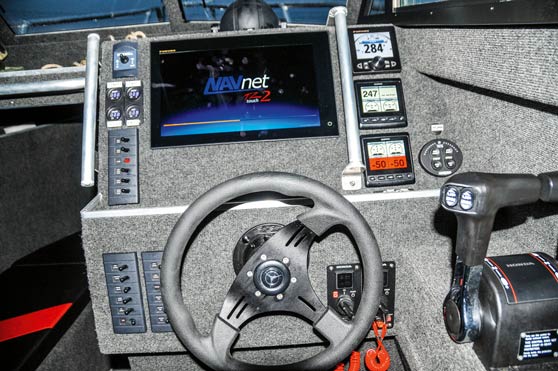 Lighting includes a Hella Marine Sea Hawk XL cockpit floodlight and a Euro LED Touch cabin light. Both have a red option to the usual white, helping preserve night vision. Blue night-lights are fitted under the gunwales along one side and a Marinco SPL-12 remote-control searchlight is mounted on the hardtop.

Seating includes two forward-facing bench-seat units with aft-facing seats that fold up flush. As well as providing ample catch and bait stowage, further seating is given by the 260-litre Icey-Tek split-lid icebox with squab tops that runs down the centre of the cockpit. (Additional wet/fish stowage is in under-deck holds).

To add further comfort and protection for his customers, Murray had specified a custom aft canopy with side clears. This is removable and can also be extended to fully enclose the cockpit for overnighting.

Two levels of shelves run along each side of the big cockpit. The lower is wide enough to take dive tanks and also houses the Jabsco pressurised saltwater wash-down system. An 80-litre freshwater system is fitted too, which works as a deck shower for divers. A transom gate, boarding platforms and fold-down ladder make life easier for divers and swimmers. 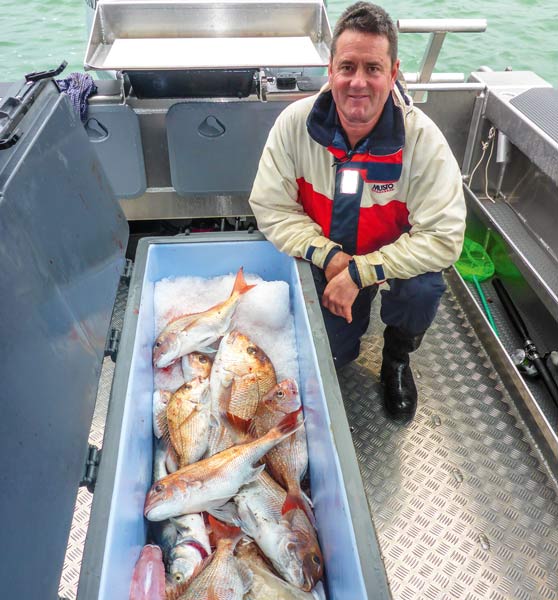 Rod stowage is well catered for. There are six stowage positions in the fore-cabin, 10 on the hardtop (although the canopy limits access), four through-gunwale positions along each side, another four across the back of the removable bait-station (with stowage drawer) and plenty of space in the cockpit side shelves – potentially 32 rod positions! I’ve mentioned catch stowage facilities already and there is also a mackerel-sized livebait tank under the transom gate, four plug outlets for electric reels and outrigger mounts as well.

You can’t go out in a boat as well equipped as this without wetting a line, so Murray ran us out to about the 60m line where he picked up a bunch of bottom sign on the Furuno. In a couple of hours, we put 20 nice snapper in the bin, as well as a bunch of fat kahawai. Murray certainly knows his stuff!

Putting the trailer in trailer boat 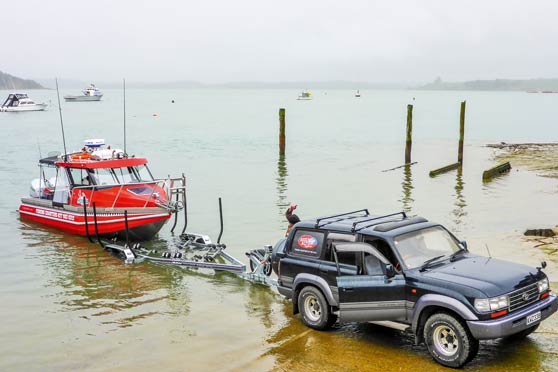 The big Senator is carried on a tandem-axle trailer from DMW Trailers of Hamilton. It features leaf-spring suspension, wind-down dual jockey wheels, dual-ratio manual winch, a fully stainless-steel brakes upgrade, auto boat catching latch, spare wheel and submersible LED lights. There are six guide poles on the trailer, useful as there is often a side current to be dealt with in the harbour. Tow-weight of the rig is around 2000kg.

The pontoon configuration of this boat with its high levels of stability, load carrying, and reserve buoyancy (along with the twin Honda outboards), add another level of safety to this rig, especially when dealing with bar crossings. There is plenty of space for anglers to fish, the sheltered rear canopy and clears for comfort, and all the other fishing and safety facilities required of a surveyed, hard-core fish-and-dive machine. Robustly built with excellent sea-keeping and a good level of finish, the Senator RH770 is ideal for its role as a west-coast charter boat. 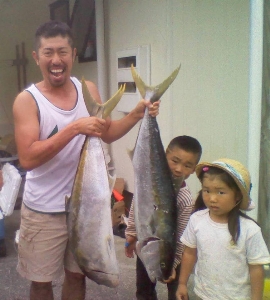