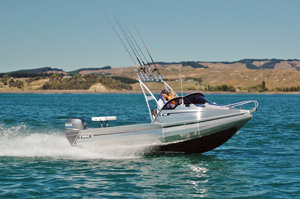 Based in Napier, the company was started by Mark Lincoln, who has a record of building aluminium pontoon boats going back 21 years. This includes the early ‘Silver Sharks’, amongst others, and he then worked 13 years for Senator Boats.

Four years ago he left Senator to do his own thing, founding Profile Boats. Subsequently he found he enjoyed building boats more than marketing them, and in 2008 sold Profile Boats to Napier retailer Firmans Marine (who also had a long prior history with Senator, but had recently parted ways). So Firmans now owns and markets Profile Boats, with Lincoln running the manufacturing, while Senator has gone on to set up its own dealership network.

While in Napier recently, I took the opportunity to give the Profile’s 545C a run.

The Profile 545 C features 4mm bottoms and deck, and 3mm pontoons. The hull is supported by the pontoon structure itself, four full-length bearers and the keel assembly. The bottom plates are butted up at the keel line and fully seam-welded. Above this a flat plate is welded across the hull, forming a strong triangular section at the keel. Lateral support is provided by a main bulkhead at the helm, the transom assembly, the forward collision bulkhead, and two central frames that also form the position for an under-floor fuel tank, if one is fitted.

The welding was nice and tidy, and left unground for full strength; metal edges had all been ground to remove any sharp edges.

A high level of buoyancy is one of the best features of the pontoon design. In this case the pontoon construction is split into three separate sealed sections, with a large area under the sealed deck as well. The hull is rated to carry up to six adults. 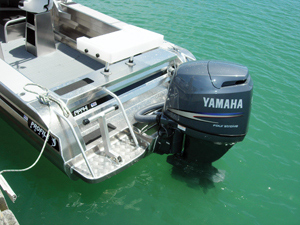 Rated for 60-100hp, the test boat was powered by an 80hp Yamaha four-stroke outboard swinging a 17-inch pitch prop, producing 50kph (27 knots) at 5300rpm. This is quite adequate for the work envisaged for the boat, but as the ‘book’ rating for this outboard is up to 6000rpm, a finer-pitch prop could squeeze a little more speed out of it. Also consider that there were two full loads of dive gear, two adults, fishing gear, ice bins etc, and that the engine was new and probably still a bit tight, so it is reasonable to expect in excess of 30 knots from this boat in the right circumstances.

With quite a stiff westerly blowing, we took the Profile 545C and a larger camera boat north around the curving Hawkes Bay coastline to Tangoio Bluff. The steering, a standard cable unit, was adequate for the job. The engine was fitted with a ‘Vibrastop’ kit and ran smoothly and quietly.

We took a wider line back across the bay to Napier, encountering a sloppy half-metre chop in places. I was impressed with the performance of the Profile: it proved to be a dry boat, throwing spray back and out from about half-way down the hull. Its sea-keeping was impressive – a nice soft rider with no bad habits. The high level of stability and reserve buoyancy gave the 545C the feel of a boat that could easily cope with nasty conditions. 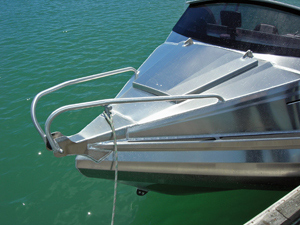 Non-skid panels on the flat pontoon tops make getting around the sides to the bow a reasonable proposition, but a large hatch in the cabin top, along with a chequerplate platform on which the bowman can stand, make this the preferable option when working the anchor.

The anchor well is formed by a half-height bulkhead up in the bow, the warp being passed down through the hatchway in front of the bowman when being pulled – workable, but not ideal, as it results in a wet shirt front.

A substantial bollard is welded to the bow, and split bow-rails drop in hard on each side of the fairlead, constraining the warp nicely, but allowing easy anchor passage and placement.

A small boat like the 545C does not have much cabin space, but a small berth has been fitted, providing a spot for a kid (or an adult at a pinch) to take a nap, as well as some internal stowage.

A flat-topped dash with a back lip offers a handy spot to store odds and ends, and also plenty of space to mount instruments. Electronics on the test boat were combined in one, handy, compact unit – a Humminbird 787C2 combination GPS-plotter and sounder. Basic Yamaha instrumentation was flush-mounted in the console, and a Uniden Solara VHF radio positioned underneath.

The line of vision for the helmsman is over the top of the low, tinted polycarbonate ‘screen, the turndown on the leading edge of the ‘screen keeping the wind-rush out of your face. A canopy rising from here up to the rocket launcher is an option. A grab rail and side shelf are fitted on the passenger’s side, while pipe footrests are added for the two upholstered, swivelling, sliding bucket seats, which are mounted on box pedestals with two levels of internal stowage.

The gunwale tops are wide and covered by Deck Tread panels, making them handy perches to sit on. Two side-shelves are wide enough to take dive bottles.

A sealed chequerplate deck covered in tube-mat gives good footing and drains to a large central sump under the transom. This, in turn, is drained by a 500gph bilge pump. Two tote tanks fit under the transom, and an underfloor tank is an option. A protected locker up in the transom wall houses the battery and isolation switch, as well as providing extra stowage.

Over the transom are two chequerplate boarding platforms with grab rails and a fold-down ‘T’ ladder. Separate mounting brackets are provided for a transducer and water intake.

Good use is made of space, a fair amount of stowage is built in, and there is still plenty of cockpit work room.

This modest-sized pontoon hull, with its stability, high reserve buoyancy and load-carrying capability, is primarily designed as a coastal fish and dive boat with the ability to be beach launched.

Four through-gunwale rod holders are fitted, two more in the transom accept a bait board, while a fold-down rocket launcher carries a further six rods. Catch and bait storage is supplied by after-market ice boxes.

The hull provides a stable fishing platform. While there is no toe recess and an ‘upslope’ at the side, good footing does allow an angler to lean forward on the gunwale if necessary.

Divers are well catered for with two chequerplate boarding platforms fitted with grab rails and one with a fold-down ‘T’ boarding ladder. Gear stowage was taken care of by wide side shelves, which took air tanks, weight belts and so on.

It was this aspect of the boat we decided to explore, and after a run up the coast, Brian Firman and his daughter Lana went for a dive to try and locate some crayfish, while I acted as boatman. A few bugs made it into the bag, enough for dinner anyway, and the boat proved to have plenty of space and carrying capacity for a pair of divers, their gear and a boatman. 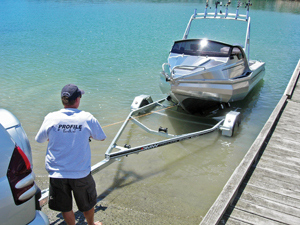 The test boat was carried on a DMW Premier trailer. This is a standard cradle A-frame design, with two pairs of wobble-rollers per side, three keel-support rollers and entry bay. Other features include: a single axle, zinc-protected leaf-spring suspension, submersible lights, dual-ratio manual winch, dual coupling and a wind-down jockey wheel. Tow weight for the rig is 960kg.

The safety and stability of a pontoon boat are combined in this Profile 545C model, with the hull design also giving a soft, dry ride. Construction is solid and the welding very competent. A thoroughly useful basic fish and dive boat for New Zealand’s often rugged coastline.

Craig Worthington goes out of his way to catch some of the lesser targeted fish species found in NZ waters, and one of his favourites is... Read More >

Many of us will know the Hella brand for their marine and automotive lights, but few know the extent of the research, development, and production that... Read More >

Sea-run brown trout might be the same species as their freshwater brothers and sisters, but their size and speed makes fishing for them an entirely different... Read More >

The Impact of Commercial Bottom Trawling

For some, bottom trawling is the only viable way to keep up with the demand for fish both locally and worldwide; for others, it’s nothing... Read More >

Many anglers showcase a lot of great fishing in New Zealand through social media, but most of this footage is taken on a boat, suggests Peter... Read More >

in The Boat Shed
34 minutes ago

Nice, it wont be too big but yeah as Steps says make sure the crew are hanging on!...

So I am pretty sure my boat is the same as the one that 'sunk'. Checking all the minor details in the pics, mine is identical....

THE GUTS OF IT! (ILEX AUTOPSY RESULTS)

in The Work-Up
3 hours ago

OK Craig - a few pics of the books and the relevant pages of this discussion.Based on that I would not be betting on Koheru. But...

Help to install a new outboard

Iâ€™m in Beachlands. I may have someone who can help out now. Cheers....

in The Boat Shed
6 hours ago

Beautiful boat!You only live once, I say go for it!!...