Aaron Standen set out for a day onboard Coastal Fishing Charters with one goal for the day: catching a trophy bass. Well-known skipper Aaron Sargent was at the helm, so he knew he had every chance of achieving his target. Aaron’s mate, Dave Jones, had organised the charter for his dad Robbie, and the crew of six was rounded out by deckie Lucas Green.

With a perfect forecast, the crew met at Hicks Bay and quickly set about filling the livie tank. After a successful bait session, the 8m Senator made short work of the trip out to the Ranfurly Banks, where the team got stuck in to the first species for the day: kingfish.

“The targets for the day were to get Dave a PB kingfish and Robbie wanted a king tarakihi and a trumpeter,” Aaron explains.

The plan was made to tick off Dave’s and Robbie’s fish first, before letting Aaron have a good shot at dropping deep for hapuku and bass – and it couldn’t have got off to a better start.

“We dropped our livies and jigs, and Dave got an estimated 35kg kingfish. And I even got a 12kg ‘puka 20m off the bottom mechanical jigging. I was at least two colours in.”

With Dave having achieved his goal for the day, it was soon time to let Robbie have a crack at king tarakihi and trumpeter. Again, things went exactly to plan.

“At the next spot, we got close to a dozen king tarakihi and trumpeter. Robbie himself got an est. 3.5kg king tarakihi, as well as an est. 6kg trumpeter.”

Robbie and Dave were sussed, so Sergeant finally set off towards deep dropping territory.

“We were fishing two hook droppers with barracouta for bait, and as soon as we got attacked by or marked sharks, we moved to another spot. We did a lot of moving around.

“I had been saying to Lucas that I wanted a big bass and I wanted a big livebait to catch it. One drift, Lucas got me a 3.5lb kahawai and he rigged it up for me. Sergeant then marked two or three big fish on the sounder, and I dropped down on them. I got to the bottom, wound up the slack and then my rod bent over. It was pretty clear that I had a big one on.”

Armed with an Accurate 500 reel and a Catch Acid Wrap rod, Aaron was able to put plenty of hurt on the fish, but he still struggled to get any line back.

“I had full drag on and two fingers and a thumb on the spool, and it was still peeling off like my line was in free spool. It became about just taking line when I could. Half the fight took place in the first 10m, the next quarter was in the next 20m, and then I finally started getting line back more easily.”

Thankfully, Aaron is no stranger to fighting big fish. He runs his own Marlin Striker 675 out of Ohope where he lives, and has landed plenty of gamefish in his time – and he needed every ounce of  his experience to cajole this fish off the bottom. When they finally saw colour, it was clear this was no everyday bass. 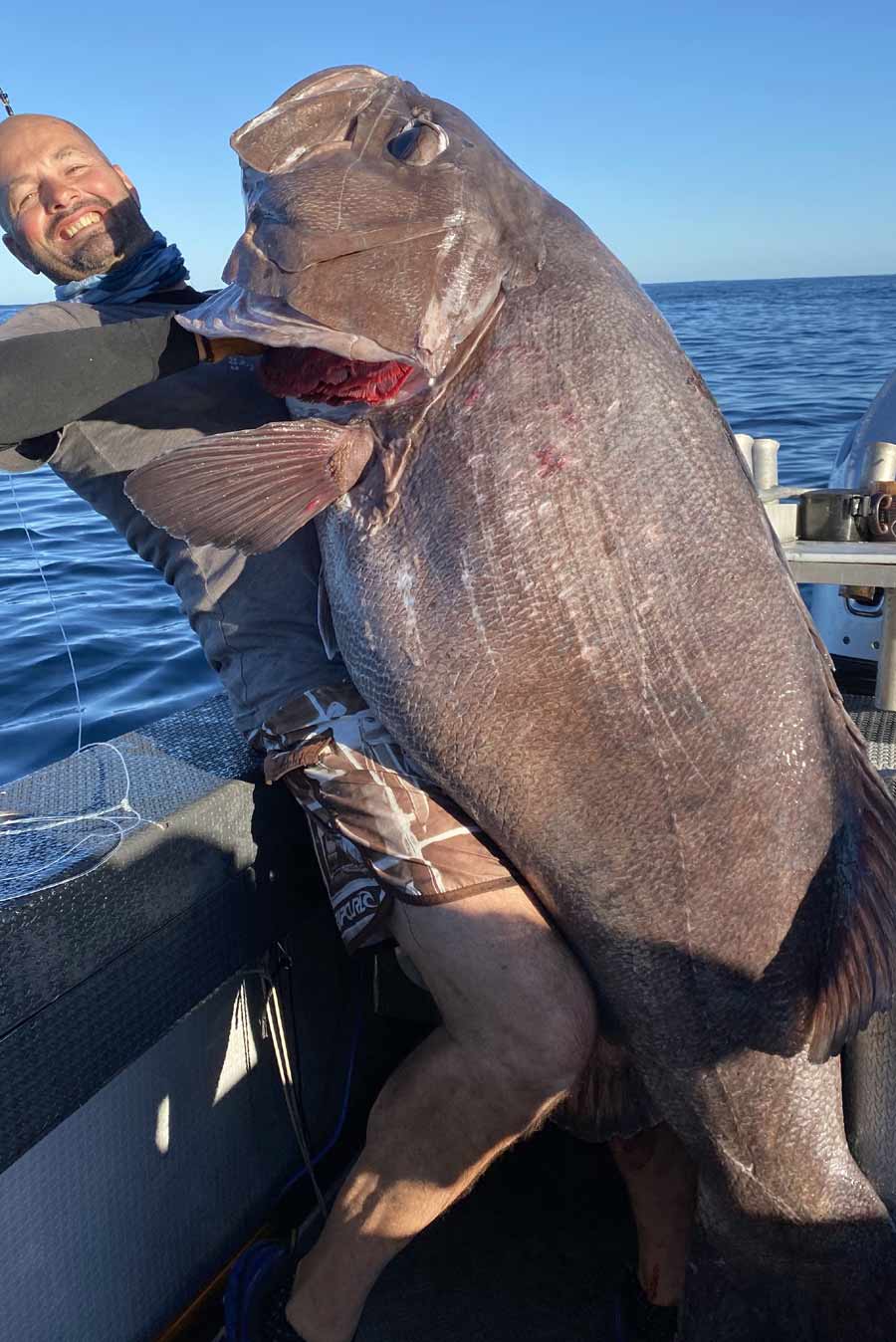 “We all knew it was a pretty special fish. I think Sergeant said he’s only got two other over 80kg in his whole time chartering, which is 15ish years.”

After admiring the catch, they cruised home with the fish on ice, then headed to the weighstation at Whakatane to get the official weight. The scales pulled down to 82.2kg – a true monster bass.

Every single one of the crew on board had achieved their target for the day, which Aaron largely puts down to the skill of their skipper.

“Sergeant was absolutely fantastic. He has lots of knowledge and lots of information, top gear and top electronics, and we learnt a lot from how Aaron ran the electronics and set up his boat.”

And what of the fish?

Its otoliths have been sent to Niwa so they can work out the age of the fish, while the meat was shared between friends and family.

“All of it got utilised, right down to the backbone and the head. The head fitted nicely into the bottom of a 44-gallon plastic drum my mate picked it up in.” 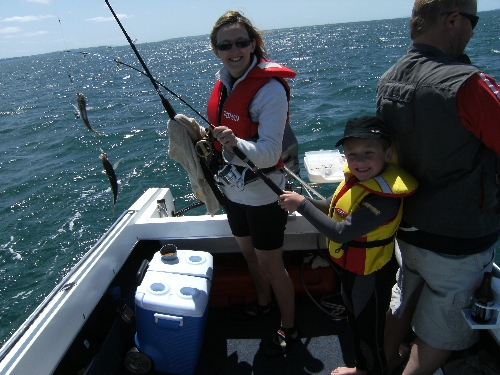 wife and childs 1st EVER fish!!!! dont you just love NZ - Off brownsbay