This was the first day Nathan and Alan had fished 60kg tackle for swords out of the well-known Western Break. They were fishing a Northland location – and I did ask for a bit more info! – which Nathan says does not always hold a big numbers of fish, but generally they are all bigger 250kg plus models. The crew were competing in the Tony Carpenter hosted swordfish jackpot event which has some big money at stake (Alan’s fish is still in the lead at the time of writing).

Once the fish had settled down after the bite, it quickly developed into a stalemate. For two hours, the fish stayed in its comfort zone ­190-210m down and wouldn’t be budged.

“We would win a few metres, then lose them. We could probably have gone a little harder on the fish given we were using 60kg tackle, but we were aware it was a good one and possibly a competition winner,” Nathan says.

Slowly they began to gain some ascendency over the fish and had the top shot back on the spool. It decided to make a final stand, refusing to come up beyond 20 metres.

“We would be thinking ‘this time’, but it would power off 60 metres, which we would win back, only to see it peel off the line gained. This happened four or five times, so we just had to be patient.”

When it finally came to the surface and they had the trace in hand, it was done. Even when the gaffs went in, there was no fight left in the fish and it was quickly secured. But that was not the end of the drama. Sword fishers have at the back of their minds the possibility of their catch being attacked by sharks, makos a particular threat.

“We were thinking about this over the next two hours it took to get the sword on board.”

The tackle consisted of a custom-built RADZ rod and a Shimano Tiagra 80 reel spooled with 60kg mono top shot over Red Gill hollow braid backing. A Black Magic Equalizer was the stand-up harness/gimbal set of choice. 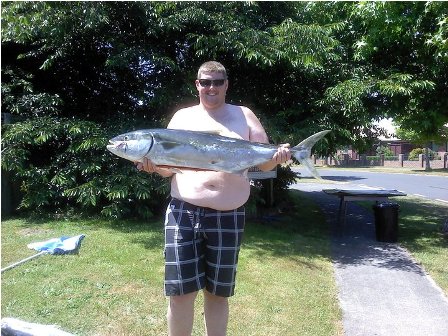