A two-billfish day is something to celebrate, but when one of them is a 434.5kg black marlin, that is something extra special.

This is what happened for the crew of the Tauranga based launch Esperelle, who went out for a day’s gamefishing on March 6, heading for Schooner Rocks.

On board were skipper Vaughan Craven along with son Jarryd and his partner Laura Blair. They arrived in the vicinity of the popular fishing location and noticed the kahawai schools were quite agitated, seeing a couple of billfish rounding up a late lunch.

Deploying a couple of kahawai livebaits around the edges of the schooling fish, they had soon hooked, tagged, and released an estimate 160kg striped marlin after a short fight on the 60kg tackle.

“While we weren’t specifically targeting a black marlin, we were well aware that this was the sort of situation we could run into one,” Jarryd says.

He was not wrong. About 20 minutes after releasing the striped marlin they were hooked up on the black which gave just one initial leap before settling doggedly into the fight.

“We were about 50 metres off the main rock when we hooked up, with the bottom just 25 metres beneath us. The fish headed straight towards a shallower rock between us an open water, I was sure we would be cut off.”

Fortunately, the line  avoided any contact with terra firma, although the trace was severely scuffed up along its length.

Jarryd says the fish never got more than 100-120 metres out, but stayed doggedly down, proving difficult to raise. They managed to get it up close to the surface and the leader in hand four times, but on each occasion  had to let it go again.

“It was a bit like a decent blue, it kept wanting to head under the boat when we got it close. All it needed to do a couple of times on the leader was turn its head and we would have been in trouble.”

With Laura, who had not driven the boat before,  on the wheel and Vaughan on the leader, they finally managed to get a gaff in it, but it was not without its heated moments.

“I had to apologise to Laura afterward, she was given plenty of ‘firm instructions’, but she had been warned,” Jarryd quipped.

The next challenge was to bring the fish on board. They could get its head up on the duckboard and through the transom door, the rigid pectoral fins and its sheer size preventing it from being dragged into the cockpit. 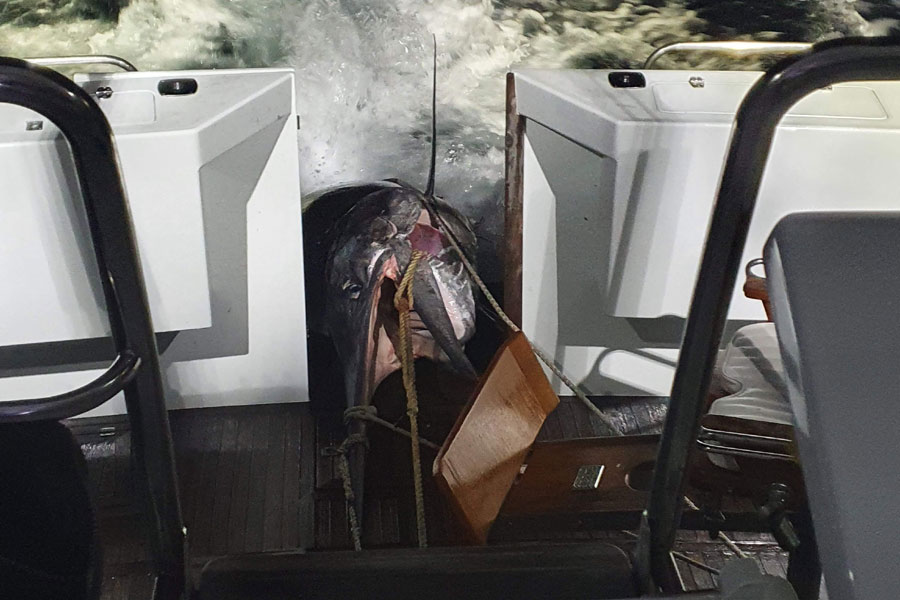 Despite their best efforts, this was as far as they could get the big fish on board.

“Even with the assistance of a crew member from Kraken, who came to help after swimming across to us in the dark, we couldn’t get it on board. We ended up having to tow it back to Tauranga and luckily the fuel berth was free, as we couldn’t reverse.”

The drama did not end there. A wheel on the trolley used to carry to fish to the club’s weigh station failed. Luckily, there were still a few people about following the club’s One Base prizegiving who willingly gave a hand. By the time it was weighed, it was well after midnight. 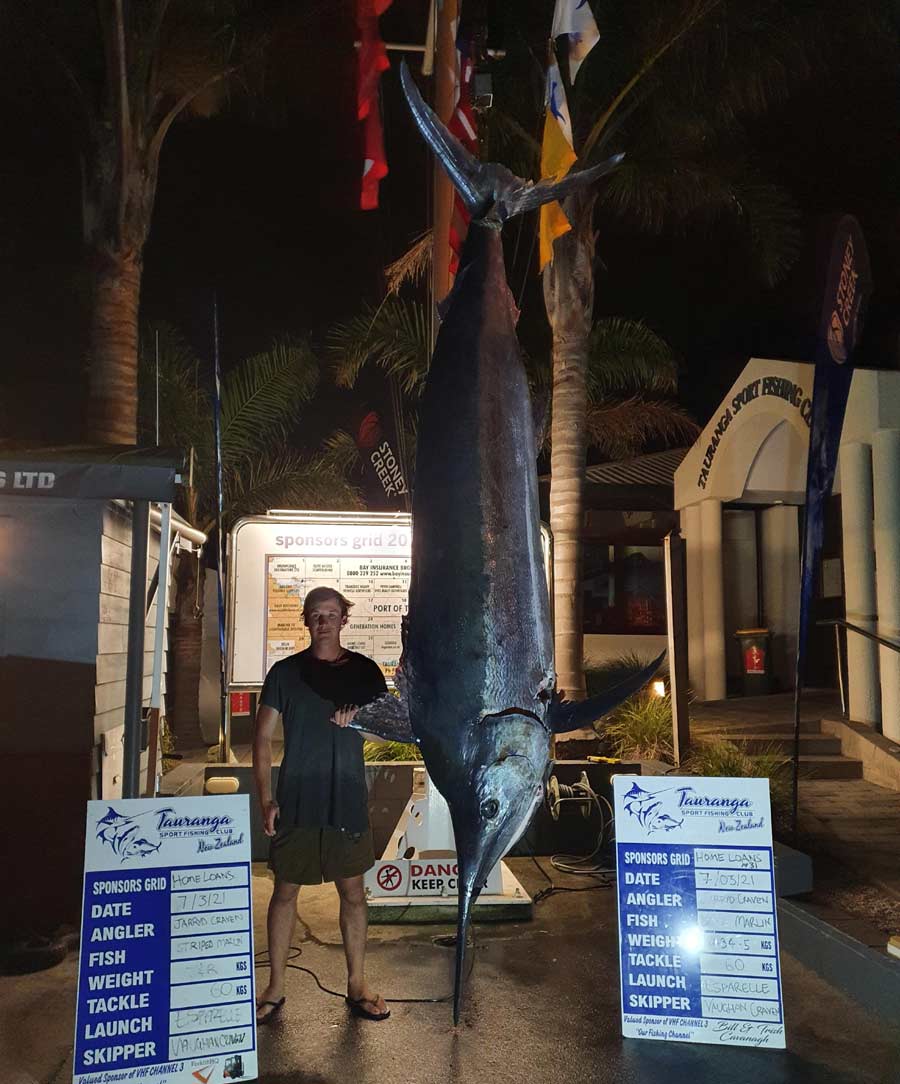 Jarryd plans to get the head mounted, the rest going to the smoker. He says he has heard black marlin smokes up well – we hope for his sake this is true as there is plenty of it!

Of interest, this was the second black marlin Jarryd has seen this season. At Karewa Island he was about to cast a fly to a school of jack mackerel when his efforts were interrupted by a decent black marlin that smashed through the bait.