With this launch, Mercury continues to transform the high-horsepower outboard market, providing its most powerful and capable outboard, which includes several industry first features for a wide variety of applications.

“Using our advanced engineering and design capabilities, we completely redefined outboard performance. The V12 Verado outboard delivers boaters unrivalled freedom, luxury and power to pursue their passions on the water. This is a remarkable engine that will change the future of boating.”

Ground-breaking product innovations include the following:

“The V12 Verado outboard delivers everything boaters want and more in a high-horsepower outboard. This engine makes boats easy to manoeuvre near the dock and provides superior handling at all speeds.

“It’s incredibly fuel efficient, so boaters can go farther and stay out longer. It’s so smooth and quiet that you can have a conversation while the engines are running. It’s durable, reliable and easy to maintain. There’s nothing else like the V12 Verado in the marketplace today,” Drees said.

The development of the V12 Verado outboard is a product of Mercury’s continued commitment to investing in R&D and manufacturing expansion, which includes more than $1.5 billion of investment since 2008.

“That work has positioned us well to anticipate and respond to shifts in the marketplace. We listened carefully to boaters’ needs and wishes, and we created new product capabilities aimed at exceeding their highest expectations.”

The Mercury Marine V12 Verado outboard will be released in Australian and New Zealand through selected OEMs and dealers in the second half 2021.

The new 500hp Mercury SeaPro outboard is also built on the 7.6 litre V12 platform and is engineered to withstand extraordinarily demanding commercial applications around the world. The 500hp SeaPro outboard shares features and benefits of the V12 Verado outboard, as discussed below.

The V12 Verado engine brings many engineering firsts to the outboard market. Its new technologies and enhanced capabilities include the following:

The first outboard engine with a two-speed transmission

The two-speed automatic transmission optimises engine rpm according to workload, facilitating powerful acceleration and highly efficient performance at cruise. First gear is 20% lower than second gear, leveraging the engine’s high torque to accelerate the boat and get it up on plane quickly. The engine continues to deliver robust power and acceleration through its power shift all the way to rated speed.

Mercury collaborated with top industry engineers to ensure that shifting — which is synchronised on multi-engine configurations — is so smooth that it’s nearly imperceptible to the boat’s passengers. The hydraulic shifting mechanism eliminates “shift clunk,” providing a premium experience at slow manoeuvring speeds and while using Mercury Joystick Piloting for Outboards.

With this engine, Mercury has introduced the world’s first steerable-gearcase system for outboards. The outboard’s powerhead — everything an observer can see above the water line — remains in a fixed position, perpendicular to the transom at all times. The steering occurs underwater, using a gearcase that pivots the engine’s contra-rotating props to the right and left.

Advantages include the elimination of a boat-mounted steering system and enhanced handling and manoeuvrability. Because the steering system does not have to move the entire engine, its performance is exceedingly agile.

Plus, while conventional outboards typically pivot 30 degrees in one direction or another for steering, the V12 Verado outboard’s gearcase can pivot up to 45 degrees in a particular direction under joystick operation. This provides much more authority to effectively manoeuvre a large boat. This feature, combined with the lower propeller speed in first gear, provides precise handling at docking speeds.

A full line of propellers in various pitches and up to 18 inches in diameter, all designed specifically for the V12 Verado outboard, is available. These propellers minimise slip, providing more rapid acceleration. The contra-rotating configuration also makes docking manoeuvres easier by providing greater slow-speed forward and reverse authority.

The V12 Verado outboard is engineered to last, even when operated for long hours in harsh environments. Mercury subjected the V12 Verado engine to the same rigorous endurance and stress tests that the other new-generation outboards in the Mercury portfolio have undergone. Like its Mercury V8 and V6 predecessors, the V12 Verado outboard easily endured the brutal regimen of testing.

Plus, enhanced corrosion-inhibiting coatings and seals stand up to harsh saltwater environments.

The 500hp SeaPro outboard was designed to be the ultimate workhorse. Building on the characteristics described above, the 500hp SeaPro outboard was engineered for maximum durability and reliability to withstand the rigors of extended commercial service. The high-displacement powerhead delivers loads of torque at a lower rpm, meaning less stress on the engine. Mercury validated the 500hp SeaPro engine to the same extended-hours performance standards as those upheld by the other outboards in the SeaPro family. These engines provide commercial operators with performance they can count on for years.

Mercury built the V12 Verado outboard to make maintenance easy. This engine is capable of operating for 200 hours before requiring routine service, including oil changes, and basic maintenance can be done through the innovative top cowl service hood while the boat is still in the water. The entire cowl doesn’t need to be removed to allow more in-depth service until 1,000 hours or five years. Plus, Mercury added enhanced engine monitoring systems to improve the overall boat-ownership experience. 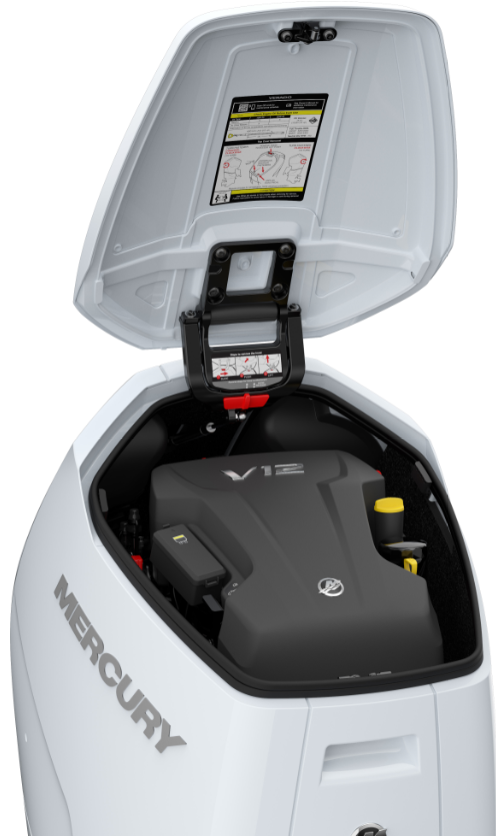 As mentioned above, routine maintenance is made easy with a newly designed cowl hood providing enough access to accomplish all the maintenance tasks associated with the 200-hour service interval without having to remove the boat from the water. Much more than a service hatch, this hood operates more like the hood of a car. Pressing the electronic release pops open the hood, and a gas strut holds it in place. Engine components are neatly arranged, and the touch points are color-coded. The service infographics inside are intuitive and easy to follow.

The V12 Verado outboard is designed for use with new premium Mercury Precision Lubricants® products. These include powersteering fluid, automatic transmission fluid and 10W 30 full synthetic engine oil, capable of providing maximum protection through a wide range of extreme operating conditions and temperatures.

Mercury applied industry-leading science to create a remarkably quiet and smooth boating experience. New noise-management designs under the cowl and in the next-generation Advanced Midsection result in extraordinary sound dampening and vibration mitigation. Plus, the electronically activated shifting of the two-speed transmission is smooth and quiet. The V12 Verado engine is the quietest high horsepower outboard ever built.

Owners of large boats will love the extra space that using outboard engines frees up. Knowing this, Mercury brought several design elements together to minimise the space occupied by the V12 Verado engine, even when it is tilted to raise the props out of the water. The engine’s space-saving design ensures its compatibility with a broader array of boats.

To conserve space on the transom, the engine features a tall, narrow angle “V” engine block design. The steerable gearcase eliminates the need for spacing that would otherwise be required to pivot the entire engine for steering. These characteristics enable the V12 Verado outboard to be mounted in multi-engine configurations with a minimum spacing requirement of only 27 inches from engine centre to engine centre. This 600hp engine needs only slightly more space on the transom than a 300hp Verado outboard and requires less spacing than competitors’ high horsepower outboards.

In addition to compatibility with the renowned Mercury Joystick Piloting for Outboards system, the V12 Verado outboard has the Next Gen Digital Throttle & Shift (DTS) system. The new controls are sleek and ergonomic. Mercury made them more intuitive by adding features like push-button access to Active Trim, which automatically adjusts trim for optimal performance. A Premier dual-handle console-mount control for multi-engine boats includes an integrated digital display that connects boaters with valuable system information and helpful pop-ups.

Bigger boats with more amenities demand more onboard electrical power. The V12 Verado outboard stands up to the task with a muscular 150 amp alternator, the highest amp alternator in the outboard market.