After a particularly slow first day of the WDSAC’s Arthur’s Emporium Junior tournament last January, smallfry fishing buddies Harry Steel (10) and Lola Chamberlain (11) made up for lost time on day two of the Tutukaka event.

When stop fishing was called, the pair had landed their first yellowfin and marlin respectively, Harry’s 66.8kg fish recently being ratified as a new New Zealand smallfry tuna record.

Trolling past the northern end of the Poor Knights islands aboard Paul Chamberlain’s trailerboat <ITAL>Off Site<> at around 9.00am, the Bonze Undertaker was nailed by an unidentified fish.

Harry was on the rod – a Shimano Talica 50 combo spooled with 37kg line – and it soon became obvious the fish wasn’t a marlin, but a tuna. It was circling deep-down and the young angler had to dig in to slowly work the fish up to the surface.

At one stage it almost got too much for Harry, but he was reminded of how much he had wanted to come fishing and toughed it out. After 50 minutes they team had the fish on-board, much to everyone’s delight.

Continuing further out, Paul spotted a large area of flat, oily calm water a couple of hours later. When he got to it the temperature rose immediately from 21.5 degrees C to over 24. Ahead of them, a marlin was seen tailing on the surface. When the lures were dragged past it, the Bonze Undertaker was nailed, and it was Lola’s turn to do battle on what was her first billfish. 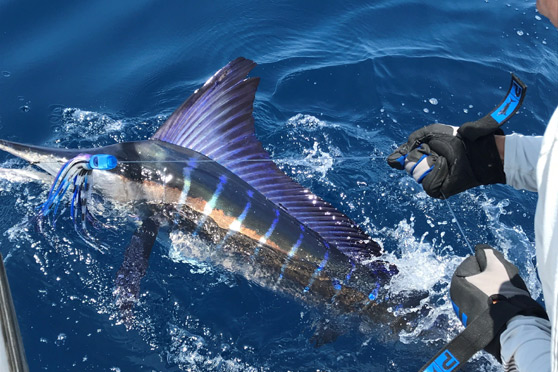 She did a great job on the small but feisty fish, sending it away with a tag in its shoulder after a quick photo shoot.

The crew retuned to Tutukaka later that night to weight the fish, only then realising they had a potential national record on their hands (this has since been ratified).

Paul says both kids are as keen as mustard to get back out on the water.

“Harry has already used his pocket money to by some new gear, including a couple of lures.”

Unfortunately, he will just have to wait until the country comes out of the current Covid-19 lockdown before he gets chance to run them.