With ever growing popularity, a full field of 101 boats and 355 anglers competed for over $90,000 in prizes in the Extreme Boats tournament contested in early November out of Whitianga, based at the Mercury Bay Sportfishing Club.

Included in the prize line-up was over $30,000 worth of Shimano Tackle along with a fantastic line-up of other prizes, many provided by suppliers to one of the country’s biggest alloy boat manufacturers. The tournament was blessed with a short window of calm weather before 30 plus knots of wind and heavy rain set in. This allowed an open playing field for the smaller and larger boats alike with the fishing area set between the tip of the Coromandel Peninsula and Whangamata.

Kicking off with a shotgun start, the fleet was led out of the bay by the 600HP powered Catch Fishing 795 Game King All Torque, not that it was a race! Fishing was fantastic with a large cluster of Extremes on the offshore pins having a blast on the hungry kingfish. Anglers were well looked after with the Lusty and Blundell team making take away coffees each morning from their display caravan parked at the main wharf; the crew from Extreme on the BBQ at the end of each day greeting returning anglers with a hot snack; and a catered sitdown meal provided on the final night.

The tournament is based on a measure and release system with snapper, trevally, kahawai and kingfish the target species. Each fish is photographed on a measuring mat, which is then sent into a digital platform created by NZ Fishing Media. Many of the prizes are lucky angler draws and for average lengths as well as for the longest three fish of each species on a daily basis and the best fish overall.

Mark Phillips took out the top snapper honours with an 80cm fish landed on day two while Injoom Park produced the best kingfish of 126cm, also on the second day.

The tournament has a family feel to it and has become a highlight of the year for many Extreme Boat owners, who travel from Australia and the United States to participate. Extreme Boats would like to thank their trusted suppliers, partners, staff and customers who make such an event possible. 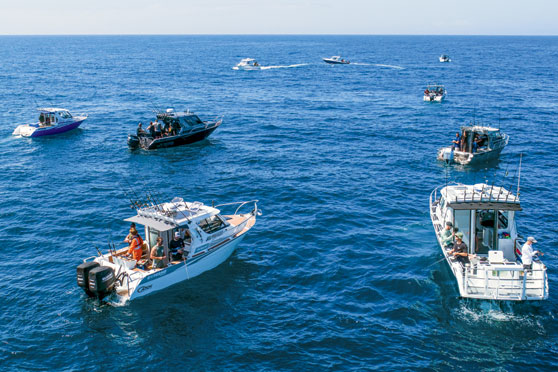