The Government, through the Department of Conservation, seems to have made a major play for state ownership of the public’s fish and game resources and sport via the department’s review of the Fish and Game organisation, says the Council of Outdoor Recreational Associations of New Zealand (CORANZ).

“The call by the review is to strip the fishing and hunting public of its right to manage its affairs, in return for an increased fishing and hunting licence fees to fund the paid positions of government appointees,” said Andi Cockroft, CORANZ chairman.

Cockroft said it is very clear the policies required to sustain the large and socially important sports of freshwater fishing and duck hunting are the prerogative of licence holders.

“Not some backroom bureaucratic boffin that has never held a rod or rifle in his life, nor can understand and appreciate the aspirations concerning ethics, field rules and recreational values.”

The Fish and Game organisation and its administration and management are funded entirely from the licence fees paid by the public with no cost to the taxpayer.

“This is a blatant attempt to disinherit the fish and game public of its over 150-year-old right to administer the sports. Would the government dare to make a state grab for control of rugby union, lawn bowls or other sports?”

Cockroft said there were disturbing questions about the two-person panel review. What were the terms of reference for those consulted and those interviewed? He viewed with dismay the current interim Fish and Game NZ’s chairman Ray Grubb's backing of the review and stating his intention to implement it.

“That’s without reference to the fish and game public. I would remind Mr Grubb he’s a public servant, elected to serve the electors, i.e. the people who pay licence fees. He must consult and listen to his constituents."

He said it was almost bizarre the Department of Conservation had instigated and conducted the review.

“It’s ironic given DOC’s poor public image, its list of failures, its bureaucratic spin and its mismanagement of wildlife, with native bird and fish populations declining alarmingly."

The department has failed in its advocacy, with some examples being its virtual non-participation in publicly supporting conservation river protection orders, its failure to advocate against excessive nitrate levels that were killing native fish, its weak management of the whitebait fishery and its penchant for aerial topdressing of public lands with ecosystem poisons.

DoC was also guilty of doing “back-room” deals such as in Hawkes Bay where a Supreme Court ruled the department was wrong to revoke the special conservation status of a section of the public’s Ruahine Forest Park land earmarked for a major irrigation scheme.

“And this is the department that now sits in judgement on the fate of the public’s fish and game,” said Cockroft. “This review is a twisted formula of conquest by division, state takeover and disinheritance.”

Fish and Game is entirely funded by the public’s licence fees said Cockroft.

“It’s a fine example of user pays/user says. Why would government want to take it over?” he asked. 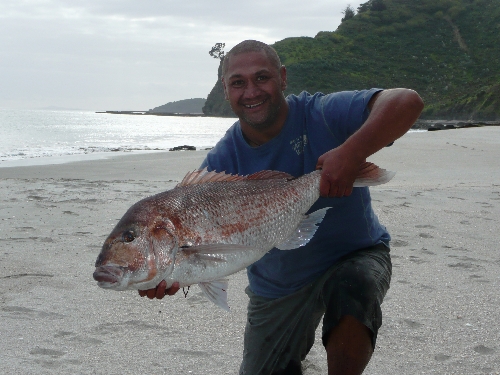 What better way to start the day - Pakiri Beach