A quadruple hookup for Albatross It has been a remarkable gamefishing season so far, with the yellowfin here in improving numbers and the billfish, especially striped marlin, producing some great stories.

There have been some great catches made from jet skis, small boats as well as reports of multiple hook-ups and captures. One of the more remarkable efforts this season came aboard the Kawhia based trailerboat Albatross, skippered by Luke Gilbert, where the crew hooked and landed a quadruple strike after a pack attack that came in the vicinity of a work-up in 100 metres off Raglan.

A successful boat in the past, Luke pointed the nine-metre Westcoaster north-west after crossing the bar to an area off Raglan where they had already tasted success this year and where bait and bird action was being reported.

The crew, consisting of Luke at the helm with his brother Max and mum Verna on board along with friends Blake Robertson and Seb Longridge, saw several boats working an area of bait and bird action. They made one pass, watching another boat get a shot, before turning and heading back to the melee.

“Suddenly there was a wall of water erupting behind us as fish came in first on the teasers before switching to the short corner lure initially,” Luke recalls. They were running the normal lure spread that also included one bonze strip dredge and two bonze daisy chain teasers, so there were plenty of targets for the pack to gang up on. 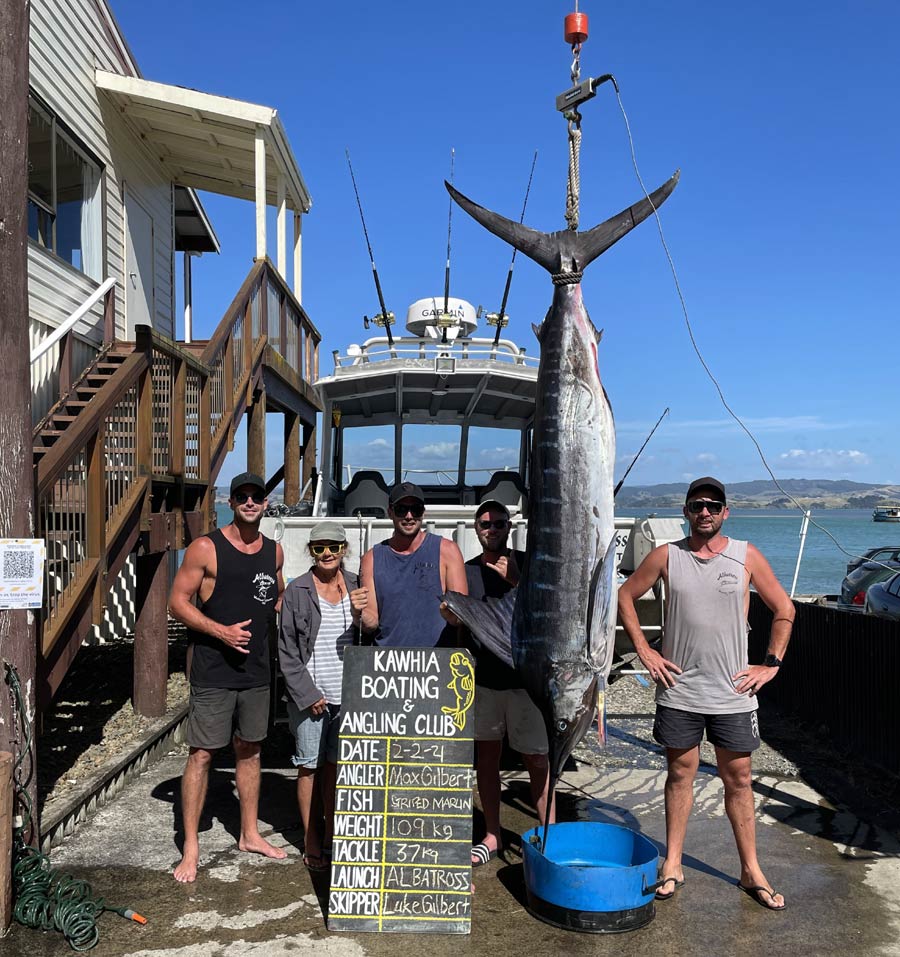 The Albatross crew, which included Gilbert brothers Luke and Max, their mum Verna and friends Blake Robertson and Seb Longridge, completed a unique quadruple of billfish earlier in February.

What happened next was absolute mayhem as four lures in the spread were hit, four sticking. Luckily, the fish all headed in different directions, keeping the lines separated. There was still the matter of clearing the fifth rod and three teasers.

“We only had three harnesses, so that was a bit of a challenge as well. When some sort of order was restored, we saw mum’s fish was the closest, so we worked on that first, getting a tag into it relatively quickly and freeing up the harness.”

Initially two anglers went to the bow with two in the cockpit. Fortunately, most of the fish stayed close with three staying on the surface and Verna’s diving deep but with less line out. It was tagged in 20 minutes – one down, three to go!

Blake’s fish was next, taking 40 minutes to get to the boat before being tagged and released – half the job done.

The next two proved a little more problematic. Max’s fish had almost spooled him and had been dragging a lot of line around, the effort proving too much, and it went to the bottom, dead. Unfortunately, Seb found his fish had done the same thing, although they were relatively close together making the attempt to raise them a little easier.

Lifting one dead billfish off the bottom can be a big ask, but two? This was going to be interesting.

“It turned into something of a deadlift. We got one up and on board before turning our attention to the second, which was also raised and boated.”

When you are hot, you are hot – running back to Kawhia the crew spotted some more bird action so ran a couple of lures past it, hooking up almost immediately, accounting for a fifth fish which was tagged and released, adding a little more cream to what had been a champagne day that will live in their memories for a long time to come.

Some of us struggle to get one marlin a trip, but four, that is something worth celebrating!

Shimano is the gear of choice aboard Albatross – Tiagra 50’s with Hollow Core braid backing top shot with 37kg mono, on Abyss game rods. They exclusively run Bonze lures rigged with light gauge hooks. For the quad it was Bonze Weapon, D-Shackle, Fan Boy and BTK lures that did the damage.

Footnote. Just to prove this was no fluke, the next time Albatross headed out, they tagged and released another two fish for a seven fish from seven bites scorecard over the two trips. In the recent Kawhia One Base, they caught and released three fish, bringing the boat’s season tally to 14.