I’m going to start out with a controversial statement. I think our Aussie mates might have it over us in their sheer passion for fishing. I’d always thought there was no nation keener on fishing than us Kiwis. However, hosting thousands of Australian anglers here on the Coromandel over the years changed all that.

It has always been humbling to see just how blown away these guys are when they visit and fish New Zealand for the first time. They often work hard for their fish back home, and ours truly is the promised land when it comes to snapper and kingfish. Inevitably, over the ensuing on-the-water adventures, fighting fish, and sharing a feed and beersies afterwards, lifetime friendships are formed.
I’ve lost count of the times invitations were extended to go and fish in the vicinity of Sydney: “Mate, you’ve got to come wet a line back home…”

So, after years of discussing it, I earmarked a week in July to go and have a fish with my Aussie mates before talking at the Sydney Boat Show.

On the wish list was an Aussie snapper with one of those big bumps on its head, a ‘flattie’ (flathead), and maybe a bluefin if they were on. But, same as any time I go to somewhere new, I was just amped to visit someone else’s backyard. 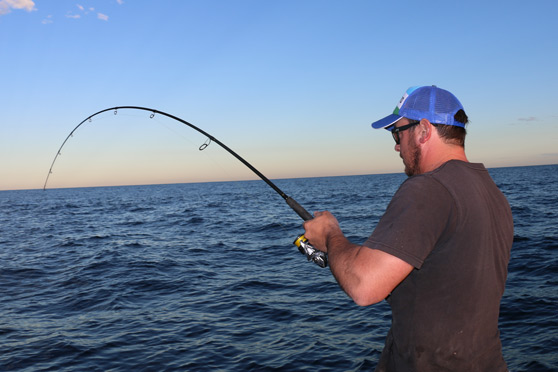 Seal rocks with a guru

There was one person I wanted to put a call out to first, and that was Michael Bonnici. Sydney-siders Mike and his wife Hayley have travelled to fish Tairua numerous times with me, and not only do they live for angling, they consistently catch amazing fish out of their backyard. (Follow the exploits of ‘Team Bonnici’ over social media and you’ll see Mike and Hayley consistently land fish many keen Kiwis would be proud of.)

Mike is also an avid free-diver, which gives him that rare insight into the underwater realm.
Testament to his passion, Mike has not one, but two, of his favourite brand of boat - the mighty Sea Devil - parked outside his home. Both are very deep-V glass boats capable of getting to the grounds at a rapid pace.

His Sea Devil 520 is used for beach launching Long Reef near Manly, casting plastics for reds and free-diving close to home. The Sea Devil 620 Zorro is at the ready for heading out wide chasing bluefin, marlin and his favourite quarry, big kingfish, on road trips north or south of Sydney.
“Hayley has the secret touch, often landing the bigger ones, despite doing everything exactly the opposite way to what I tell her,” laughs Mike.

Mike hooked up Zorro and we towed two hours north of Sydney to the famed fishing port of Port Stephens. Here, we launched into the harbour’s beautiful clear water.

Like any successful fisherman, Mike is not afraid to do the miles to find the fish, and we blasted up the coast to Seal Rocks, one of his favourite haunts, with Zorro effortlessly slicing through the water.

My eyes were glued to the stunning undeveloped coastline, the long white beaches and distinctly Australian vegetation. Despite being a weekend, there was not another person or boat in sight. Whales frequently broke the surface, blowing their spouts and following their migratory path north. Paradise!

We were taken to one of Mike’s favourite washes on a current-swept point - and a few casts in, his fishing buddy Dion’s soft-plastic got slammed by a nice snapper. Line was absolutely screaming off the reel, but Dion did everything right, keeping the snapper’s head up and turning it. Eventually, after lots of to-ing and fro-ing, we saw a big humphead under the boat. Then the line went slack. The leader had popped. Nooo! That was the snapper we were after!

Never mind, that wasn’t to be our last snapper encounter for the day - far from it! Mike always has his thinking cap on, and we were soon gathering fresh slimy mackerel baits.

A big old berley up on over a submerged rock followed (where Mike does very well chasing black marlin in season), and saw me come up tight on a snapper, after fishing a slab of slimy way back in the berley trail. There was quite a bit of weight, and it was only when the fish got to the boat that it put on some screaming runs. I was stoked to land my first Aussie snapper, a solid one of about 6kg with a good old bump. Tick! Back down the coast, we had an awesome soft-plastic session on a brick designated as ‘Lure Fishing Only’ in the Seal Rocks National Marine Park. The sounder showed good snapper and baitfish sign scattered around.

First, one soft-bait got smashed by a string-pulling snapper - then another. Next thing we were on a triple. Suddenly a massive vertical lump of dense red sign appeared on the sounder that could only mean one thing – kingfish - and a big school of them, too.

That signalled the end of the snapper fishing: all the sign disappeared and things went dead. But it turned out to be the calm before the storm, as next minute the ocean erupted as the baitfish were pushed to the surface. Pillies were flying out of the water trying to escape a pack of hungry kingfish, and a football-field-sized area of angry white water was the result.

Thankfully, Mike was prepared, with two Carpenter stick-baits pre-rigged and ready to cast. Our soft-bait rods were unceremoniously dropped to the deck and exchanged for the stick-bait outfits.
One cast, two sweeps of the rod, and I came up solid on a fish that made the Stella 10,000 howl.
“Man, this is a good fish!” I exclaimed.

There we were, with one fish on already, kingfish feeding everywhere, and two soft-bait rods lying on the deck with their line still out and lures still in the water – this could go badly wrong in a hurry!

Dion responded by scrambling to get his gear in, and soon after picking up mine, a kingie wolfed the soft-plastic down and he was on! Whoop! Two big kingies hooked up and I was still getting railed hard, but eventually a solid 17kg kingie got its obligatory photo taken before being released. As for Dion, he really had his work cut out on light gear, but did really well, keeping it away from the reef. It was pretty much pitch black before we got his solid fish to the boat.
I’d heard stories of how hard the fishing can be on the NSW coast at times, but Mike had produced the goods as I knew he would. What a cool session; it’s one I’ll remember for a long time - ironically on snapper and kingfish, but in a totally different setting.

I can’t wait to get back with Mike for a crack at those Port Stephens blacks and stripies hard in on the coast sometime in the future...

A flattie in Sydney Harbour

The deserted and undeveloped coastline up north was well and truly contrasted the next day, with Sydney Harbour being our next playground!

Our guide was Sami Omari, an Australian fishing writer and all-round nice guy.
He picked me up in his centre-console tinny, a particularly stable little platform from Australian manufacturer Master Marine, and we cruised under the Sydney Harbour Bridge and past the Opera House.

A very different but equally fun way of fishing followed, with very small Berkley Power Baits cast out into 1-2 metres of crystal-clear water in front of waterfront apartments on Sydney Harbour. 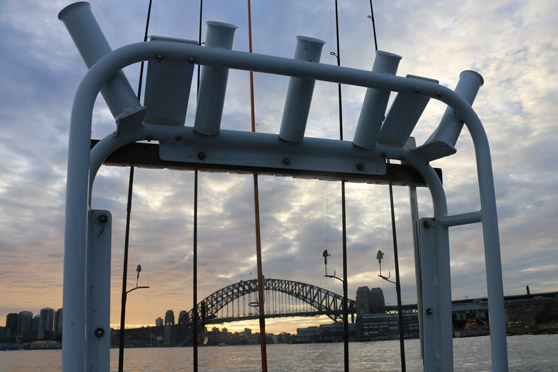 Sami instructed us to be very aggressive in working the plastic baits; the territorial flathead sit hard on their pectoral fins on the bottom, and will usually pounce as lures go overhead.

Sure enough, working the baits back over the weed beds worked a treat - I got slammed by two nice flatties. What a cool, very visual form of fishing in the shallows; it sure broke up our city time while at the boat show.

Even better, the chefs back at the Novotel Darling Harbour worked their magic on it, and it’d be right up there with some of the nicest fish I’ve eaten.

The rest of the week saw us exploring the beautiful coastline between Sydney and Byron Bay. Bryon Bay was especially attractive; I could see myself kicking back there for a few months over New Zealand’s winter. It has an amazing climate and a really cruisy, laidback and slightly alternative feel - much like Coromandel. The huge arced beach with a crystal-clear point break at one end would be one of the loveliest beaches I’ve seen anywhere.

We then took a break from the fishing, attending the ‘Splendour in the Grass’ music festival, along with about 40,000 other revellers, enjoying a mix of homegrown Aussie talent and international acts.
Another place I’ll be back to, for sure, is Coffs Harbour, a few hours south of Byron Bay. The continental shelf comes close to the shore here, and it’s well-known for the thumping reds present at times, as well as a thriving marlin fishery over summer.

We spent a great day on the water looking for a swordfish with Rob Lang from Coffs Coast Sportfishing, his 12.2m (40ft) custom Black Watch providing an awesome platform to fish off. Rob had recently pulled off a ‘grand slam’, consisting of blue, striped and black marlin, not to mention Aussie’s first marlin of the new season.

While I believe we’ve got it over our NSW mates in terms of the prolific nature and size of our snapper, ‘puka and kingfish, one thing that appeals about getting back over for another road trip is the variety of neat species on offer. Of interest to me, there is inshore fishing for bream, cobia and jewfish, as well as coastal game fishing for black marlin (while I’ve done the ‘big girls’ at Cairns, I’d be stoked to do some light-tackle inshore fishing for them) and offshore fishing for big southern bluefin.

I’m therefore looking forward to spending some more time with my Aussie mates on the water, whether that’s here at home or sampling something new in their backyard.
The southern NSW coast and a big bluefin are calling...

[INVALID] The FG knot is strong and practical. Here, Mark Kitteridge walks us through the FG knot tying process.... more >

Trout fishing in the backcountry wilderness can yield trophy trout, but these dangerous gorges also require care and caution.... more > 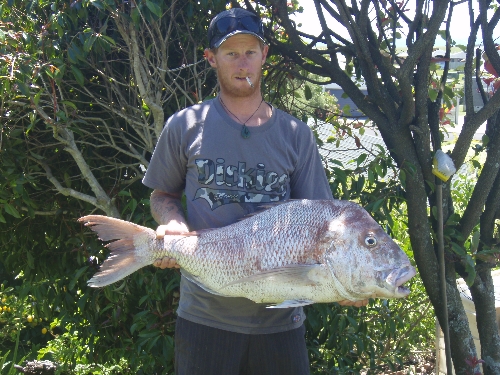 26 lber from kayak in 7 meters of water - north taranaki