The HelmMaster EX is the newest iteration of Yamaha’s original HelmMaster system. Miah Dixon spent a day aboard a Haines Hunter fitted with the new system to see what all the fuss is about.

The outboard market is a competitive one. There is always something new coming or released, and it takes something that is so obviously useful to boaties to really stand out. The new Helm Master EX did just that.

Joystick controllers are the next iteration of boat handling technology. The most notable feature of the new HelmMaster is the joystick, which is capable of controlling up to four outboards. What is more impressive than this is its ability to control just one outboard as well. Let me explain… 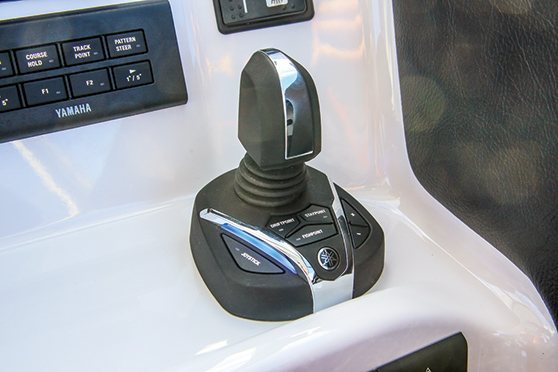 Anyone that has driven both a twin and single-engine vessel will know that manoeuvring with more than one engine is significantly easier. Simple physics dictates that you’ll never get the same amount of manoeuvrability with a single-engine as with multiples, but the HelmMaster EX goes a long way to making the very most out of your one screw.

Using the joystick is almost akin to playing with a toy version of your own boat on your dash – bump the joystick forward to move the boat forward; bump forward and twist to starboard to go forward and starboard. The result is a faster, more responsive boat handling experience. While at first it takes some getting used to – reaching for the throttle and steering wheel is a difficult habit to break – it rapidly becomes second nature and allows you to quickly and confidently put a boat into all sorts of positions. 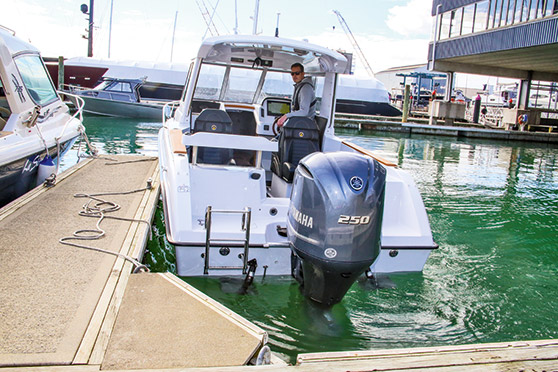 Franco Venturino eases the Haines back into its parking spot. Only having to use one hand on a joystick means it's easier for the helmsman to turn and see where they're going.

Despite all the hype around joysticks and their close quarters benefits, the updated HelmMaster has also introduced a number of fishing-focused features:

FishPoint holds your vessel on a set position, which is ideal for a number of fishing scenarios, such as deep dropping over pins.

DriftPoint maintains your bow position as you drift. This means when soft-baiting or slow jigging, you can position your bow (or stern for that matter) to your preferred fishing position, activate DriftPoint, and the outboard will hold you in that position as you move with the wind and tide.

The step up from DriftPoint, DriftPoint Track allows you to maintain your bow/stern positioning while also travelling along a route which is plotted on your MFD. This function has a myriad of fishing uses, from following contours while trolling for trout (and avoiding getting snagged) to keeping a set distance away from rocks or reef when fishing the wash – the limit is only your imagination!

Part of the broader HelmMaster package is the integrated autopilot system. While all autopilots can navigate in a straight line, the HelmMaster offers additional functionality for getting to and arriving at your destination. The TrackPoint feature allows users to plot a set of waypoints on an MFD and have the autopilot follow that route. As the vessel arrives at the final waypoint/end of the route, users can program the vessel to gradually slow down, and automatically engage the likes of FishPoint or Drift Point.

As an extra bonus, the system works seamlessly with Yamaha’s digital electric steering system. This allows the user to adjust how stiff or loose they want their steering to be. A ‘tighter’ wheel gives a lot of control – ideal for following seas and lower speed manoeuvring. Looser steering gives more flexibility to the helm, reducing oversteer and giving finer control at high speeds. This, alongside the trim assist function, can support both the new boatie and the more experienced helmsman in getting the best ride out of their vessel. 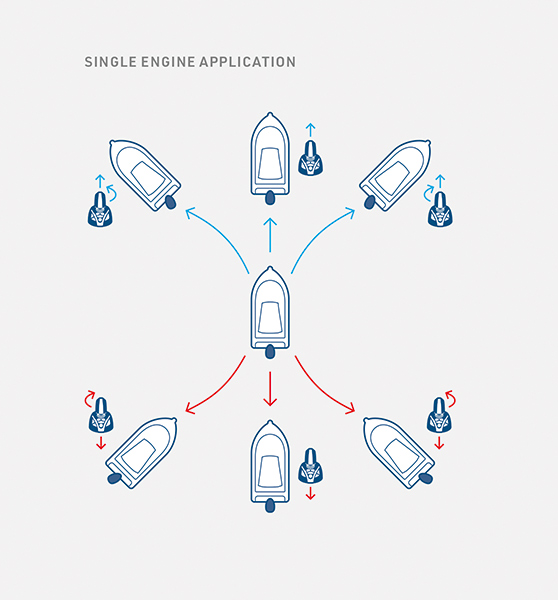 Joystick control of a single-engine was previously unheard of. It allows more responsive manoeuvrability of a vessel than conventional helming.

Following the lead of the automotive industry, Yamaha has developed a keyless security system for their outboards. As with modern vehicles, a proximity sensor is fitted to the vessels ignition system – the engine’s fob or ‘key’ must be in range for the engine to start. When not in range, the ignition system is entirely shut off, rendering the vessel immobile. But don’t worry, the fob floats! The new keyless remote means a push-button start (ideal for multi-engine setups) and increased security for your vessel. 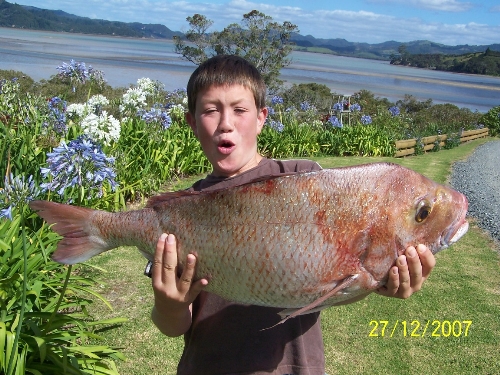 Woohoo its a good one Dad - Whangaroa Harbour entrance