Our annual boys’ trip to the Far North – which more often than not ends up being bi-, if not triannual – had a slow start. After noticing the boat on the back of the ute, every local we met at the campground was quick to let us know that the fishing had been as slow as they’d ever seen it over the last couple of weeks. With little rain and a bad moon phase, Doubtless Bay had apparently gone very quiet. Knowing that I had been given (“volunteered” is probably more accurate) the responsibility of testing the Black Magic Deepwater Slim Jigs, and that I’d talked up our chances in the NZ Fishing News office all week, this was not the news I was expecting or wanted.

Our collective morale was lifted slightly by the first evening. We didn’t manage to launch until 7pm after a typically awful experience setting up our campsite – the site we were allocated was at a solid 45-degree angle, meaning a fair bit of problem-solving was required – so decided to spend the last two hours before darkness looking for kingfish inside the bay. At the first pin, two of the guys – Rowan, and my brother Tim – dropped the Black Magic jigs to the bottom and were soon hooked up. One was fishing with the Candy Stick colour, the other the Fiery Tiger. The quick double hook-up after the horror stories from the locals came as a huge relief – but this feeling was short-lived. These two fish were well under the legal size, as were the next four fish we landed that evening. On a positive note, the kingis were biting, and the jigs had so far been flawless – when there was sign we hooked up, and every strike had been converted into a fish.

Let’s not dwell on day two. It was hot, windless, long and miserably slow. We saw a jumping sunfish, managed a solid skippie on a soft-bait and landed a few snapper up to nine-pound in a last dash 30-minute soft-baiting effort in the shallows, but the kingfish were either absent or not biting at the pins and reefs in and around Doubtless Bay.

With a similar forecast for the next and final day, we decided to change tack. Launching at the other side of the peninsula, we shot out at first light, hoping to find a bit more current and a lot more action. The plan paid off immediately.

We pulled up at the first area I wanted to check out, and half the sounder glowed red with baitfish – and what looked like a few kingis hovering beneath. The Black Magic Jigs were deployed by the guys, and my brother hooked up within a few winds. Another rat. Thankfully, Jonny hooked up on his second drop, and this one started to take a bit of line. While he fought his kingie, Tim and Rowan had dropped their jigs to the bottom again. Both hooked up, which sent me reaching into my bag for the camera. A triple hook-up on a weekend where apparently no fish were going to bite was worth a photograph. Two out of three made it on board, the biggest unintentionally released through a weakness in the braid which somehow snapped halfway up the line.

The next 45 minutes was carnage, with multiple triple hook-ups. I even managed to leave the helm for a drop and quickly landed a small kingie (probably just legal) which I released boat side. We landed around ten legal kings, kept three and, as always, lost the two biggest ones to the reef. The heaviest landed fish tipped the scales at 13kg, and there were plenty of fish landed around the 10kg mark. With sore arms and enough kingfish meat for us and our families, we left the jigging grounds and finished the morning with a soft-bait in front of the beach.

We all agreed that we’d use the Black Magic Deepwater Slim Jigs again. The shape made them very easy to retrieve through the water column, which was particularly noticeable in the couple of spots we checked out that were over 100m deep. The shape also clearly produced an attractive action as, generally speaking, we hooked up as soon as we saw sign. We tried four of the colour combinations, and all of them performed equally well. The assist rigs were also very reliable, the 8/0 and 9/0 hooks (attached to the 200g and 300g models respectively) never slipping once or bending out of shape, despite the considerable attention they received throughout the final morning. All in all, a great boys’ weekend in the Far North and a positive first experience with the Deepwater Slim Jigs. 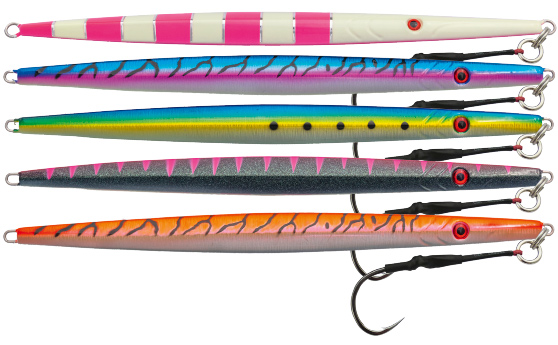 Five new colours have recently been added to the Black Magic Deepwater Slim range. The writer tested four of these and can confirm kingies like the look of them.

Although NZ is classed as a temperate climate, we are lucky enough to get plenty of visitors from the tropics. During summertime, a number o... more >

Kirk Davis shares some tips on where to find fish on the jet ski in summer.... more >

John Walkley is an experienced saltwater and freshwater fisherman who has fished extensively in both NZ and Australia. In this article, he t... more >

This year, we’ve gathered some awesome gifts that are ideal for the fisher in your life, whether you’re in the Far North or the ... more >

Flat fishing for kingfish with saltwater flies is a highly technical but rewarding proposition. Here, Craig Worthington discusses how to cat... more > 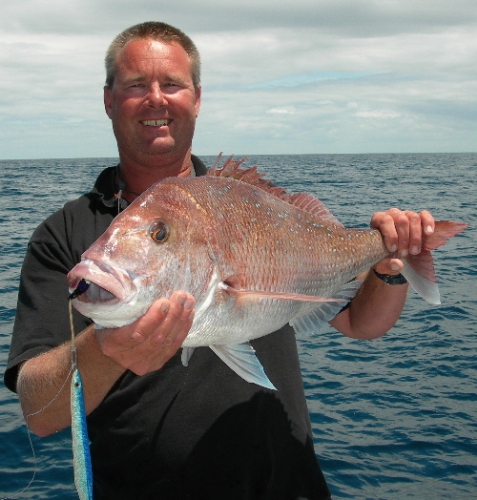