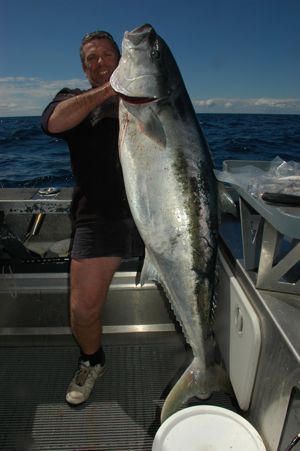 Yellowtail kingfish are the ultimate sportsfish.  Pound for pound nothing fights harder than a New Zealand Kingi!

If you want to catch one of these green and gold beasts then Epic Adventures are the ones to do it with!  Tairua and Whitianga are home to the Aldermen Pins and a range of coastline which holds one of New Zealand's best kingfish fisheries.

From jigging to popping, livebaiting, cubing and light tackle, we can put you on to great kingfish action - year round! Our kingis typically range from 12kg to 30kg.

We specialise in the Japanese style of vertical jigging for kingfish.  We have all the specialised jigging gear you will need on board and whether you are a first timer or expert jig fisherman we can guide you to some of New Zealand’s best jigging spots!

Our two boats are the perfect set up for jigging and we are there to provide expert advice and guidance.

Our gear ranges from Stella's to Ocea Jiggers, Daiwa Saltiga and Jigging Master, and all the latest jigging gear to use and trial.

Kingfish are suckers for a well presented livebait! 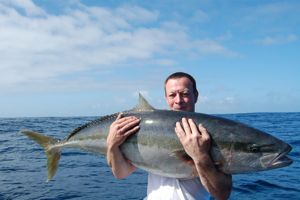 For the pure thrill of sportfishing, nothing quite beats livebaiting for kingfish, especially seeing a kingfish smash a livebait right in front of your eyes in the shallows!

Depending on the season, we livebait anywhere from the coastline (summer), to the deep seamounts and dropoffs (winter).

Again, we have all the specialized tackle to ensure a great hook up rate.

We deep drift, slow surface troll, downrig or float livebaits depending on the season and what bait schools are around.

Jigging for snapper and hapuka 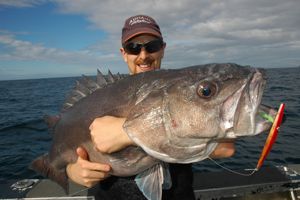 Hapuka and snapper are both partial a bit of heavy metal as well!

Our fishing trips can include some time spent targeting both of these species.

Hapuku in particular are one of the tastiest fish in the ocean and you can’t beat slapping a puka steak on the BBQ at the end of the day!

If a bit of Hapuku fishing is what rings your bells then book a trip on our website: Nothing has quite revolutionised the world of sportfishing more than soft baits.

Our favourite form of fishing softbaits for snapper is casting in the shallows - stopping a 6kg snapper that has hammered your cast in 8m of reef is a blast!

Softbaits are super effective in the deep as well.

We have plenty of snapper softbaiting gear on board for you to try and we’ll have you catching snapper on softbaits in no time at all!

Our favourite softbait by far are the Gulp range of softbaits and we have an extensive range on board to suit the depth and what the snapper are feeding on.

Our method of deploying them ranges from jig heads in the shallow to Deep Water rigs such as the Cyclops, Berkley Elevator rigs on the deeper reefs.

Snapper range from nice eating pannies to the 10-14kg range.

When the snapper are really feeding up large whole fresh baits and livebaits are often a popular weapon for us as well!

To book a Snapper Fishing Charter with us go to the Epic Adventures website:

Game Fishing for marlin and tuna During the season, which typically runs from January to April, we are set up to target any of New Zealand’s gamefish, including our legendary Striped Marlin, Blue Marlin, yellowfin tuna, Mahi Mahi and other line peeling monsters!

We are set up with quality Shimano Tiagra gamefishing gear and a wide selection of trolling lures and livebaiting gear.

Over the last two years we started using some of our jigging reels like our Stella 20000 and Jigging Master reels on gamefish as well, and we've knocked over big yellowfin and striped marlin on our Jigging Gear - awesome fun!

Tairua and Whitianga are both renowned gamefishing destinations, and it is a short run out to the very productive grounds which include 'The Hook', The Aldermen Pins and the very productive continental shelf which drops dramatically outside the Aldermens, providing huge upwellings of current, bait, birds and the pelagic fish that follow.  Ohinau Island just out from Whitianga was once the game base of the legendary Zane Grey, and much of his writing of the fishing he did in New Zealand waters was off the Mercury Islands and Mayor Island which is close to our Tairua base.

We recommend fishing at least three days for the best shot at some awesome gamefishing action.

Too book a New Zealand gamefishing trip with Epic Adventures get in touch with us on our website: 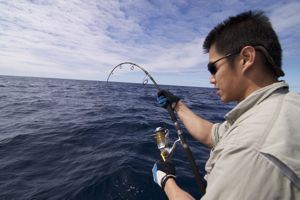 We use and supply top quality sportfishing gear on all charters, think Stella, Ocea Jigger, Jigging Master, Smiths for jigging, Tiagras for gamefishing  and plenty of other well known top of the line brands.

You need the best to stop some of the monster fish we hook!  You are welcome to bring any of your own gear as well.

Quality terminal tackle can be provided if required, on a pay if lost basis. 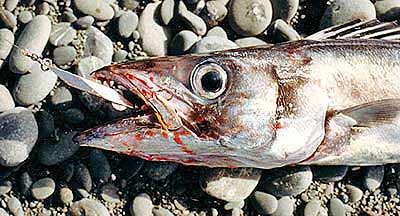