An increased work load and family commitments mean I don’t do many Charter Connections these days, but sometimes you can’t say no.

In this case it was because I’d already met the blokes involved – George and Peter Bourke, and Nick Jones – and you couldn’t ask for friendlier, nicer, keener guys. It was therefore my pleasure to go out with them, Nick Jones especially, as he also happens to be a contributor to the magazine.

Better still, I had NZ Fishing Media bosses Grant Dixon and Grant Blair to help me with monster-fish catches and photos, along with super-keen angler Shane Hartstone. Shane is an independent sales representative for several top fishing companies, including Composite Developments and BCS Enterprises. Shane writes for the magazine, too. 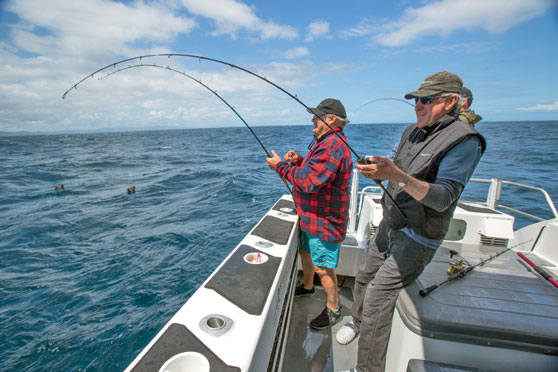 We met up with Nick at Pier 21 Marina and climbed aboard the very impressive looking Midnight Express – 9.85m metres of gleaming fishing machine and one of three handsome Extreme boats owned by Hauraki Express. Another of them, Midnight Rider, would accompany us, hoping for photographic opportunities, although the choppy conditions looked likely to limit these.

As you might expect of four guys deeply immersed in the recreational fishing world, we had plenty of gear that needed stowing, but Midnight Express swallowed it all up no problem – it has stacks of stowage capacity.

Then we were off, heading east across the Firth of Thames towards the Coromandel Peninsula, where we hoped to find some shelter from the rather ‘lively’ conditions and nail a few nice fish.

Fortunately, Midnight Express proved very seaworthy in 13-17 knots of unpleasant wind-against-tide nor’easterly, her hull rarely thumping or slamming as she sliced through the white-flecked chop. However, these borderline conditions meant we largely remain inside the cabin, seated on the comfy padded bench seats, out of the spray and occasional shower of rain.

Unfortunately, we didn’t see any work-up activity in transit or upon reaching our destination, but that didn’t faze Nick, who knew a good drifting area nearby.

Sure enough, my 200g Zest jig had only just touched down when a couple of sharp nips were followed by a harder one and my skinny little slow-jig rod ripped down. Grant D’s rod bent over soon after, as well.

This was the beginning of several hours of productive fishing; while we didn’t set the world on fire, the fish were there if we kept working at it, and some were good ones, too. Unfortunately, the nature of slow-jigs means their strong but small hooks do sometimes rip out on bigger fish, prompting choice words, rolled eyes and frustration, but they certainly attract all sizes of fish and some of them are BIG. 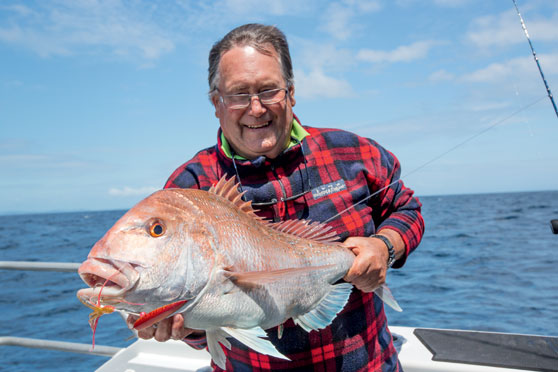 Grant took ‘fish of the day’ honours with a fat, gleaming 6.5kg (14lb) specimen that anyone would be happy to catch, on a mottled-orange Shimano Bottomship. And he caught the second biggest, too, thanks to a Shimano Rock Hopper.

Other lures to perform well included my Zest Slow Jay slow-pitch jig (thanks, Shane!) and a Slider in Candy Apple colours. We stopped for a tasty lunch of super-tender smoked brisket and coleslaw in fresh bread rolls, courtesy of Shane, and soon afterwards decided we had all the fish needed. It was a happy bunch of anglers who headed back towards Auckland – especially as we now had the swell and wind moving in the same direction, making for more pleasant travelling conditions.

Consequently, I sat in the cockpit, sprawled out on the huge centrally-positioned seating area, luxuriating in the sun and wind as Midnight Express powered its way westwards. I love fishing. 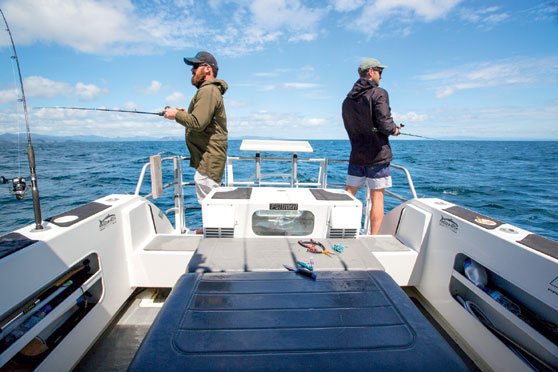 I don’t believe I’ve ever seen three nicer-looking mid-size charter vessels, and they are practically set up, too. Owner Peter Bourke has set a high bar right from the start, although comfort and good looks are no doubt partly due to the fleet’s other roles as water taxis and providing sightseeing/nature trips.

The Hauraki Express boats are currently split over two area bases, with two operating out of Downtown Auckland’s Pier 21 most days and the remaining vessel working out of Sandspit. However, the boats can travel decent distances fast, and frequently work-in with one another when necessary.

Hauraki Express mainly fishes the Hauraki Gulf and around its many islands (believe me, this area remains a wonderland for anglers!). Their charter crews use lures, because they are so effective that even inexperienced anglers can catch fish with them, especially with a little tuition provided – if necessary – as part of the experience.

Work-ups are routinely targeted, and fortunately for everyone involved, this exciting action can be found year-round. But even if the work-ups aren’t happening, the range of Catch jigs available onboard generally ensures crews bring plenty of fish home.

Snapper is the most common species encountered, but the bycatch commonly includes kingfish, kahawai, john dory and trevally. These species all like lures, but that said, the boys also enjoy live-baiting for snapper and kings.

Day charters and multi-day trips (linked with coastal/island lodges) can be accommodated, with six to eight (maximum) anglers filling these boats nicely. However, Hauraki Express can cater for as many as 18 anglers if necessary, with six anglers allocated to each of the three boats – great for a bit of friendly competition!

And no worries if you don’t have the right tackle: the very latest jigging gear and lures are available for hire at $25 per person. Since I only went on Midnight Express, that’s the only boat I can cover in detail – and there is a lot to like.

I’ve already mentioned this boat’s capacious storage. The main stowage is up in the bow, on and between the generous V-berths, as well as above them in the shelf on one side, while a clever ‘tackle hammock’ accommodates and protects slow-jig outfits on the other.

There are lots of other shelves and spaces scattered around too, not least of which are the two big cockpit side shelves. A reasonable number of rod holders are available, although some are not that easily accessed (by short people, anyway!), so we tended to lie some of the unused outfits on the bunks for’ard.

As you’d expect, the helm station is equipped with the latest electronics, with comfy, padded bench seating placed around much of the saloon.

Outside, running down the middle of the cockpit, is a huge padded seating area that’s bound to get plenty of use in the future (it was my favourite spot), although it can get a bit wet when the sea’s rough.

The cockpit is spacious enough to allow active fishing either side of the central island, with two people easily able to pass one another.

I was pleased to see Midnight Express fitted with a transom platform cage. Yes, you do tend to get wet standing out there in rough weather, but it allows two or three anglers to lob slow-jigs up ahead of the boat’s drift so they get down efficiently and are worked vertically for longer – a real advantage – especially when the boat is drifting quickly, as it was that day.

I also really liked the drink/knick-knack/sinker holders around the cockpit – perfect for a cold/hot drink or stowing various small items of handy tackle. The guys involved really make a difference: friendly and easy going, they also have plenty of fishing experience (especially Peter, who’s been fishing the Hauraki Gulf for 50 years). No wonder their operation is doing so well.

Nick, our skipper for the day, is a qualified lawyer, but loves the sea and fishing so much he only practices law part time. That same passion for the outdoors shines through in the features he writes for this magazine.

Nick was happy to go the extra mile for us – and he did so literally when we were aboard. (Man, did we go a long way – and very quickly, too!)

As competent anglers, we invited Nick to join in the fishing fun, yet whenever a fish had to be netted and unhooked, he seemed to miraculously appear.

Having managed to jam a huge amount of fishing into his life, he uses this experience to good effect, helping to ensure his clients go home happy.