Hooked Up Charters is a new operation based out of Half Moon Bay with Laurie Powell at the helm. In early February, Grant Dixon spent a day on the water with Laurie, accompanied by two fellow industry stalwarts and keen anglers – Daiwa’s Scott Malcon and Hella Marine’s Duncan Stirling…

A long-serving teacher and keen angler, Laurie Powell was looking at his options outside of education when friends put the idea of chartering into his head.

Laurie regularly took a bunch of mates out fishing with him, and they would often comment that he would make a great skipper and host and should look at doing fishing charters full time.

After 30 years in teaching and the fitness industry, and having plied his profession while travelling throughout the world, Laurie resigned from his post at Maclean’s College to exchange the whiteboard markers for fishing lures.

“Call it a mid-life crisis, but the more I looked into it, the more I liked it and after doing some research and with support from my wife Jo, I have decided to give it a go,” Laurie explains.

Now armed with a Suzuki- powered Extreme 795 Walkaround, powered by a Suzuki 300HP four-stroke outboard and fitted with Raymarine electronics, Laurie is in the charter business, providing fishing and tourist packages within the Hauraki Gulf.

He has fished all his life, mainly around the Hauraki Gulf. As a young man, he did quite a bit of land-based fishing further afield at the likes of Lottin Point on the East Cape and around Mangawhai where his grandfather lived.

‘Granddad had a launch, and I took every opportunity I could to get out on that.”

Laurie’s first real boating adventures as a young man were with a good mate who had previously been a commercial fisherman. He then owned a 6m Lazercraft, with a thickened hull that ‘carved through any slop’. Regular outings on this vessel with this friend and now mentor opened his eyes to the adventures to be had hunting big fish in a boat.

Laurie’s first boat was a Glastron, an open American-designed runabout which he says was great for fishing out of as there was nothing to get in the way, but it was not the best sea boat.

“I found this out the hard way when I tried to negotiate 20 knots of wind running against the tide in the Motuihe Channel.”

His next vessel was a marked improvement in the sea-keeping stakes – a New Zealand manufactured Sea Nymph V146 which proved to be a well-performing, stable fishing platform that offered a little more shelter from the elements via a half-cabin.

On returning from an overseas stint where he taught PE at International schools and English as a second language, Laurie purchased an alloy Fyran Horizon 600, powered with a 115hp outboard.

“I went everywhere in this. It was a great little boat, and as it was a bit bigger than the Sea Nymph, I could overnight on it.”

This led to trips to the outer islands and the Coromandel, all the time adding to his fishing experience and knowledge of the Gulf.

“It had a decent livebait tank set into the transom, and this gave me yet another option when targeting kingfish and snapper.”

Laurie fished this boat for eight years before stepping up to the Extreme 795 and getting his skipper’s ticket. 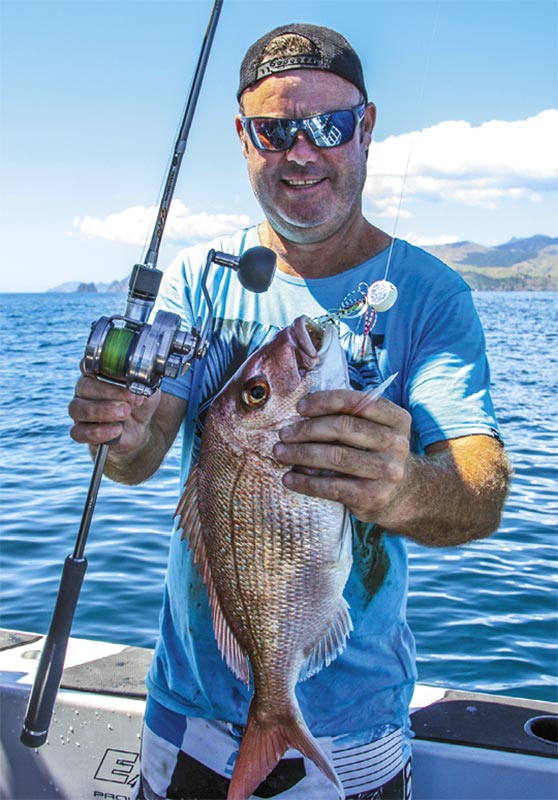 Skipper Laurie Powell has had over three decades of recreational fishing experience in the Gulf.

He mostly operates out of Half Moon Bay but is prepared to travel to chase the fish and work in with client’s requirements. He will also do pick-ups from downtown and Devonport – trips can be tailored to suit individual needs.

He also offers personalised Hauraki Gulf tourist options as a side-line, which include walking trips to Rangitoto, Motutapu and Tiritiri Matangi islands, a wine trail on Waiheke and an ‘island hop’ trip to the lesser-known spots such as Ponui Island. Across the Firth of Thames to Coromandel township is another option.

The bulk of his fishing is done with lures – jigs for kingfish and soft-baits, and Catch Freestyle Kaburas and Beta Bugs for snapper. Livebaiting for these two key Hauraki Gulf species is another weapon in his angling armoury.

Laurie carries a mix of tackle on-board including Catch, Daiwa and Penn outfits to cover his angling opportunities.

Our mission with Laurie was three-fold. The first was the Charter Connection write-up, the second was to put some new Daiwa tackle through its paces and thirdly, but no less important, was to catch Duncan his first kingfish and first snapper on lures – no pressure Laurie!

Making an earlier start than usual, we left Half Moon Bay as the first ferries arrived to pick up their city-bound commuters – much rather my ‘office’ than theirs, I was thinking!

First stop was off Waiheke’s Home Bay to load up on some jack mackerel livebaits. This was achieved in just a couple of short drifts, and with the bait tank full, it was time to head off on a flat calm sea out towards Channel Island at the top of the Coromandel Peninsula.

Laurie had been fishing up that way on previous charters, and during the hour-long trek he ratcheted up the stakes by telling us of previous successes. Talk about putting pressure on yourself!

With Scott on the bow fishing the new Kohga Bayrubber Sliders which he had a hand in designing, he drew first blood with a pannie snapper while Duncan and I deployed livebaits from the stern. My first bait was snaffled by a kahawai, and when a second bait was deployed, there was a strange take. 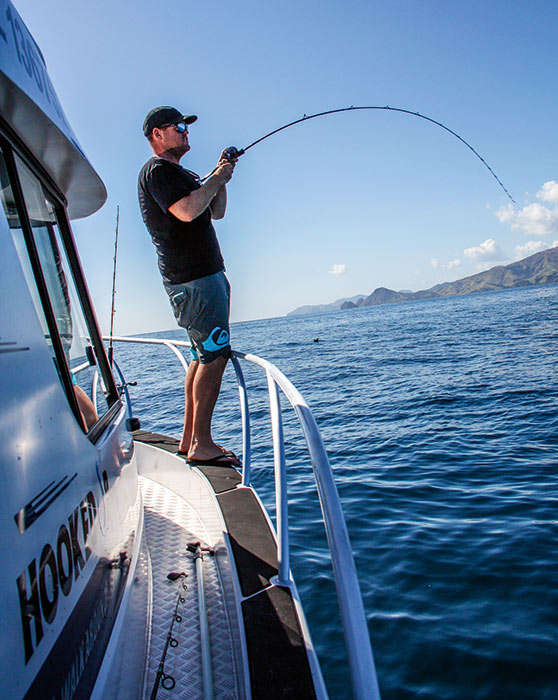 Scott Malcon makes the most of the walk around feature to target snapper from the bow.

It wasn’t the ‘wham bam’ take of a kingfish, and when the hook was set there was just a moderate pull – ‘surely a decent snapper’ I thought, but the tell-tale tail beat was missing.

While line was coming steadily off the reel but at no great rate, a large mako came out of the water within just a few metres of the boat, performing the perfect mid-air pirouette before crashing back into the water, spraying those in the cockpit. Some snapper!

It did this twice more and handing the rod to Scott, I re-armed with the camera in the hope of catching some more aerial action. Despite Scott hanging onto the estimated 120-130kg shark for another 15 minutes and having the leader out of the water and close at hand twice, it became camera shy and eventually the trace parted.

Getting back to business, we ran the live-baits around a nearby kahawai school, and it was not long before Duncan was putting his back into a solid fish, the steady tail beat indicating our target species.

Making good progress, the fish suddenly took on a new lease of life, peeling line against the drag.

“Another bloody shark” was the call, and it was to be proven right. Duncan had been robbed of a fair fight with his first kingfish by a bronze whaler which had mauled the kingfish around its head.

Some quick action saw the fish brought aboard – at least the bulk of the fillets remained relatively unscathed, and his family would eat that night, even if he had been short-changed in the catching of it.

He was to get his just reward later in the morning when he landed another fish in the 10-12kg range, ticking off that box. 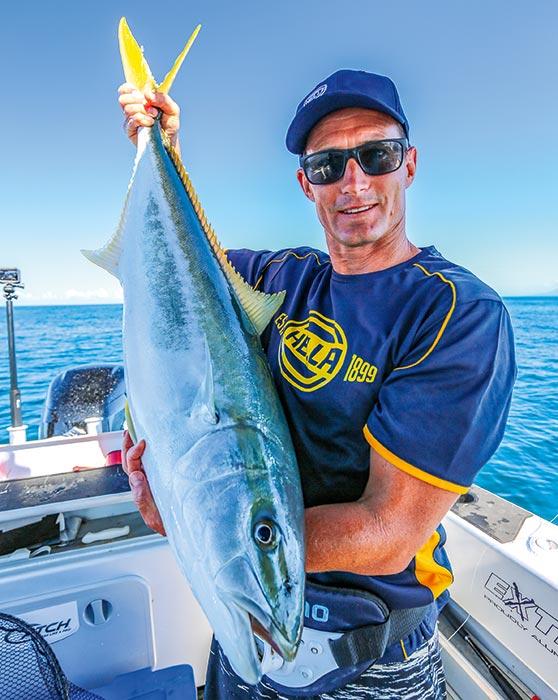 Another one ticked off the species list. Duncan Stirling with his second, and this time un-taxed, kingfish.

Moving a short distance away from the island we ran over some good sign on the bottom beneath some surface action that saw the terns fully occupied. Dropping the Kohga Bayrubber down it was not long before Duncan was into the snapper, regularly adding good pannie fish to the take-home bin.

By the time it came to point Hooked Up towards home we had more than enough kingfish, trevally, kahawai and snapper to feed us all.

We had experienced an enjoyable day, the action steady rather than fast and furious but a quick look at the bin indicated a catch that would see many people enjoy fresh fish in the next day or two.

The vessel is a good one to fish from. It is a stable platform, and the gated swim step added extra fishing space. Being a full walk-around, the Extreme fully utilises its 7.95m length. There is a large amount of fishing space in the Extreme 795, including a caged swim step.

Laurie says his preferred number of anglers is six – four in the cockpit and two from the forward casting area. Feasibly, the front two could be working soft-baits while two in the cockpit fished livebaits and two others inchikus or kaburas.

As Laurie admits, he is new to the charter game, and every trip is a learning curve, but he is fast on the uptake. While this report card does not put him at the head of the class just yet, he gets top marks for effort and enthusiasm.