Until this season they ran Cara J, a Pelin Eclipse 10.5m (34ft) vessel that Steve finished building in 1992 and subsequently lengthened to 12 metres (38ft) to provide more cockpit fishing space. 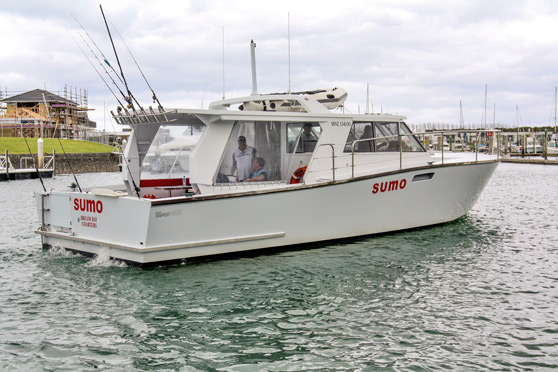 “When I first had Cara J, I had trouble getting crews, so decided to put the boat into survey and give charter fishing a go,” says the former Telecom electronics technician.

Then the Martinovichs purchased Sumo, a 46ft (14.6m) Tempest built by Dave Wade in Sandspit. The vessel was built six years ago for Dave’s personal use and remains in pristine condition; Steve commented it was like stepping onto a new boat. One feature in particular will endear Sumo to clients as it did us: the cockpit layout. Dubbed ‘Café Sumo,’ two long tables and seating run lengthways down the cockpit, protected by removable clears. The ‘café’ is a great place to travel, relax and get gear organized out of the elements.

Steve’s ‘go-to’ style of charter fishing is bait and berley, and the layout reflects this (although there’s plenty of fishing space along each side and across the beamy cockpit to accommodate other fishing methods, too). 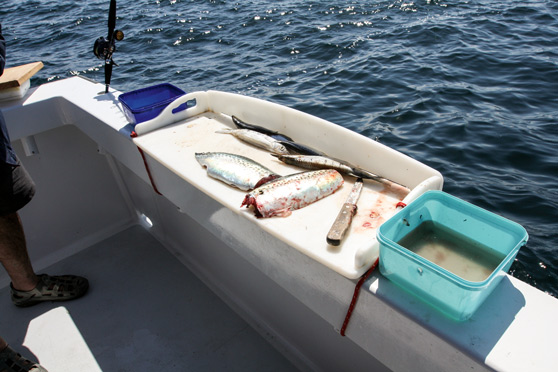 As everyone knows, despite anglers taking due care, bait and berley generally create a mess over time. Steve has mitigated this as much as possible by creating several removable bait-stations that fit over the gunwales. These incorporate a two-litre ice-cream container, held in place by a toggle, to provide a mini-sink for hand washing – a genius solution born out of many years of cleaning up after messy crews!

There is more good fishing space up forward, where several anglers could easily cast surface lures comfortably from the bow.

Steve typically takes out fishing parties of 10 (he is surveyed for 23) and offers a range of fishing experiences that include: full and part-day charters; line-fishing trips; corporate days; family excursions; tournament fishing; kingfish trips; and chasing big game fish.

While his usual area is the Hen and Chicken Islands and the Bream Bay/Whangarei Heads area, he has day charters booked to go further afield to the Mokohinau Islands.

“The Mokes has become something of a specialty destination. While it takes a little longer to get there for a day trip, the effort is generally worth it.”

While day trips are Steve’s bread and butter, he also enjoys hosting multi-day excursions to places like the Mokes and Great Barrier Island; there is comfortable accommodation for up to eight anglers, but six or less is ideal. 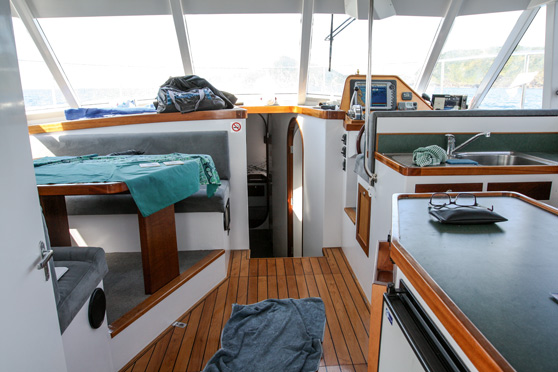 The galley is well appointed with a gas oven and hob, along with refrigeration. A good-sized table is in the saloon, in addition to the two more narrow ones (already mentioned) placed outside in the Café Sumo area. The flush toilet is accessed from the cockpit, so people are not traipsing blood and scales through the boat or having to continually remove footwear.

“The list keeps growing. Just as I tick jobs off the top, a couple more are added to the bottom,” Steve quips.

Sumo is powered by a Yanmar 500hp high-speed diesel that sees her cruise at around 18 knots and top out at 25. This ensures angling clients maximise their time on the fishing grounds rather than spending time getting there. A typical charter leaves Marsden Cove at 7.30am, returning at 4.00pm. During daylight saving, evening trips leave at 5.00pm (very popular with holidaymakers) and tackle is available for hire.

Being close to Auckland – approximately 90-minutes drive from the Harbour Bridge – a day trip is easily doable and probably explains why the bulk of his clients are from the ‘big smoke’.

Steve is also available for, and enjoys, tournament fishing of all sorts. He is in demand to fish contests such as the Beach & Boat, as well as Tutukaka and Marsden Cove club events. Heather enjoys her fishing too, and gets out as often as possible.

With bad weather reducing our opportunities to get out on the water, our day with Steve involved not only this Charter Connection, but our annual ‘Daiwa Day’, where we put in time with the Brittain Wynyard and Co Ltd staff to check out the latest Daiwa offerings. This saw BW’s Fishing Manager Scotty Malcon coming armed with four rigs: two soft-bait outfits and two slow-pitch combos (our impressions of these are featured on pages 124–126).

We ended up with five anglers on board for the day, giving us heaps of fishing room, and even though there was a good 15 knots of northerly blowing, Sumo proved a very comfortable and stable platform to fish from. 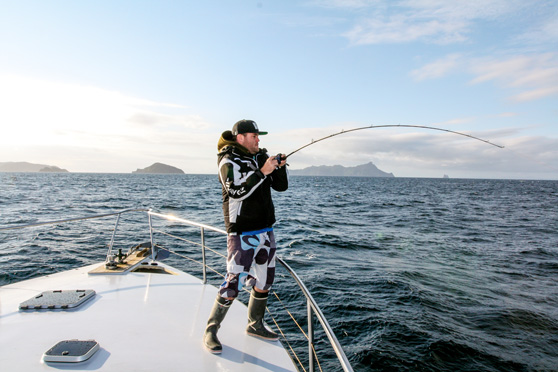 However, these conditions did make drifting over the deeper pins difficult, despite Sumo deploying a large John Hewinson Canvas drogue that kept our speed down to less than one knot.

We blame the time of year: September is a bizarre month, often producing ‘feast or famine’ scenarios, especially when lures are used. For a while it was the latter, with the bin having a decidedly empty look to it around 11.00am.

Then Steve suggested we have a look around the Tara Rocks for a ‘bait and berley’ session. If nothing else, by converting the outfits to bait-fishing roles, we would be putting the versatility of the Daiwa gear to the test.

This style of fishing is Steve’s forte, and no sooner had the salmon berley begun to disperse than we started getting bites. The end result, after several hour’s fishing in the middle of the day, was a respectable catch of solid snapper.

Despite our success though, Steve says it used to be even better. “Once we could almost guarantee a catch like today’s, and often we would have our limit of snapper by mid-morning and have to work out how to fill in the rest of the day for our charter.”

He says the target species have also changed, especially with more Asian anglers coming on board.

“These guys are less snapper orientated. Anything red is in demand and prized: jock stewarts, pig fish, pink maomao and grand-daddy hapuku [scorpionfish].”

Unfortunately, Steve has seen a reduction in these species too, something he puts down to the indiscriminate efforts of commercial gill-netters, who crisscross local reefs.

Having said that, there are still plenty of exciting fishing opportunities available in some fantastic locations – and when combined with an affable, knowledgeable skipper who works hard to get onto fish aboard a fast, sea-kindly vessel, Bream Bay Charters is hard to beat.