I followed a traditional path when starting trout fishing. As a kid, I started my freshwater fishing with a cheap spin rod before ‘graduating’ to fly fishing, which I have stuck to all my adult fishing life ? with the exception of the odd bit of harling and downrigging. In fact, it got to the stage where I had convinced myself that fly was easily the most effective way to catch trout - until a recent trip took me back to my past.

I was to be fishing a high-country water (Lake Nutgunnatellya), and as I had a couple of Black Magic’s Enticer spoons (in ‘Brownie’ colours) and a similarly-coloured BMax 60 diving minnow to try out, I brought a light spin rod along, as well as the ‘long rod’. Just as well; strong winds and rain were ripping down the lake and after one brownie came to the fly, the frustration of trying to cast in the wind became too much and I set up the spin rod instead.

A good move as it turned out. This lake has only brownies in it, which I have always considered less susceptible to spin lures than rainbows, but in this case the Enticer spoons and the BMax 60 just brained them. Both types of lure were equally successful, with the minnow running at a nice depth of about a metre in the relatively shallow water, and not requiring quite the retrieve speed of the spoons to keep it out of the weeds. This resulted in the BMax getting more exposure out in the strike zone on each retrieve, allowing more time for a picky fish to make up its mind. (In deeper, faster water this would be reversed.)

The weight of the lures was sufficient to make decent casts with the spin gear, despite the conditions, with long casts regularly resulting in hook-ups of acrobatic brown trout in the 1.3-2.3kg range.

Over the length of my stay I had three sessions of about two hours each, resulting in 15 nice brownies brought to bank. Maybe I should go spin fishing for trout more often. The continued expansion of Black Magic’s freshwater range included the introduction, last season, of the Enticer range of spinners. These lures feature startlingly lifelike finishes, imitating a number of juvenile fish species. Their fluttering action is particularly attractive to predatory fish. There are five colour options to choose from (Brookie, Brownie, Perch, Rainbow and Trout – all with silver backs) in either 7g or 12g weights.

Effective for trolling and casting from the shoreline for a number of species (including trout and salmon), these lures are manufactured from high-quality components, including a chemically-sharpened treble hook, strong split-rings and a swivel to help prevent line twist. The BMax 60 is a 60mm long, bibbed diving lure designed for trout and salmon. At rest it is a subsurface suspending lure. It has a good weight for casting with a light spin rod and is also effective when trolled (editor Grant Dixon enjoyed success trolling this lure for rainbows in the Rotorua Lakes). These bibbed lures typically dive to 1.2-1.8m and have an enticing swimming action that’s aided by the free-swinging split ring fitted to the nose tow point. Armed with two, strong, sharp treble hooks, I didn’t drop a fish on this lure. Five colours are available: Brownie, Bully, Smelt, Goldie and Greenie. 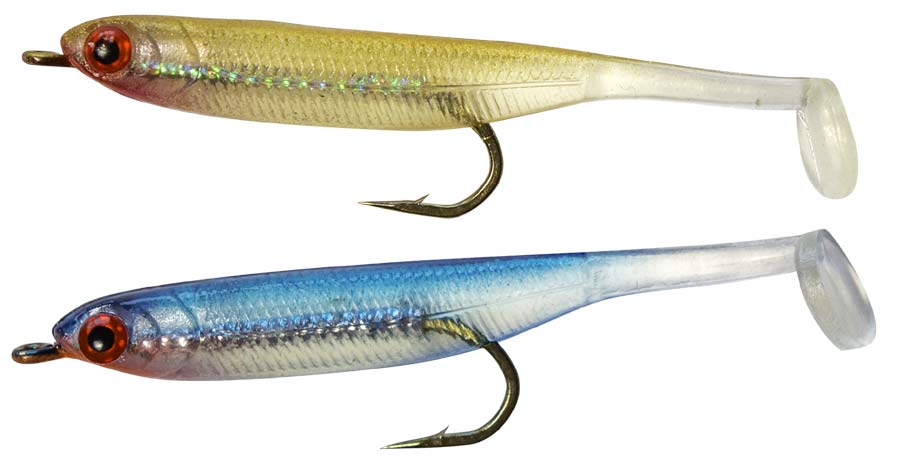 The Jellybean is a natural-looking soft-plastic lure moulded around one of Black Magic’s freshwater fly hooks. The hooks are made in Japan from premium-grade high-carbon steel, and the paddle tail gives them an enticing action in the water. These lures come in a range of six lifelike colours and, at 5cm long, are particularly irresistible to any hungry trout. Jellybeans are ideal for fishing in rivers and have been proving equally effective when jigged in lakes. 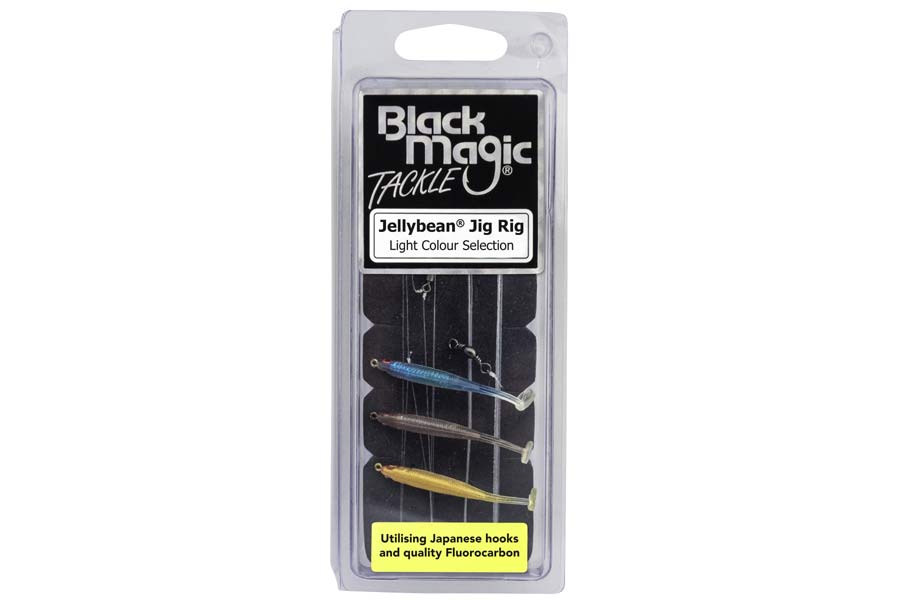 Jellybean lures are also available as a jigging rig for lake fishermen. Rigged on 6kg (12lb) fluorocarbon for extra strength and abrasion resistance, each rig has three different-coloured Jellybeans in either a light or dark colour combination. Simply let your rig sink to the bottom and then wind it in a little. Move your rod tip up and down slowly to utilise the natural swimming action of the three paddle tails. Their action in the water is very enticing to large freshwater fish, and having them on a pre-tied rig makes them a particularly effective option that’s easy to use. 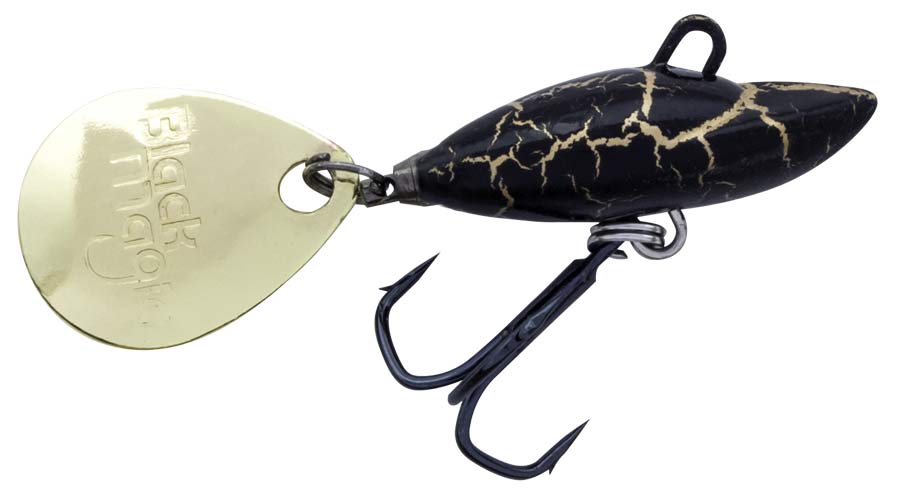 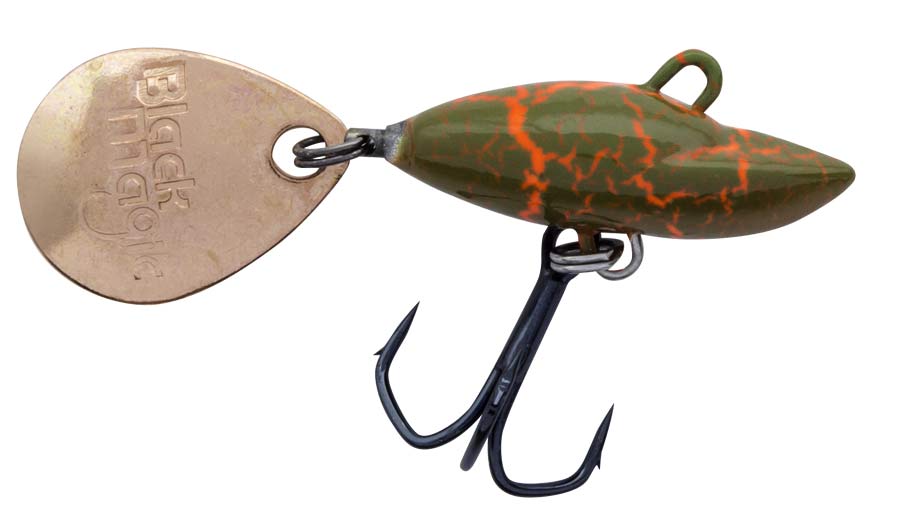 Ideal for trout and salmon, the Spinsects come with some unique features: a unique spinning blade that creates a very enticing action and spins on a ball bearing swivel, helping to prevent line twist. A reverse-barb treble hook allows easier release. Despite their small size, Spinsects are well weighted and are available in 6g or 12g options. With five original colours in each size, Spinsects are an excellent lure for trolling in lakes or casting and retrieving in rivers. Re-inventing a favourite lure from the past, Black Magic came up with the Freshwater Chicken. Although relatively small at 60mm, these lures have enough weight in their 10g heads to make them ideal for longer-distance casting and retrieving.

Freshwater Chickens are available in two natural-coloured feather combinations, making them ideal for freshwater species, particularly trout. Choose from either brown-olive or brown-ginger.