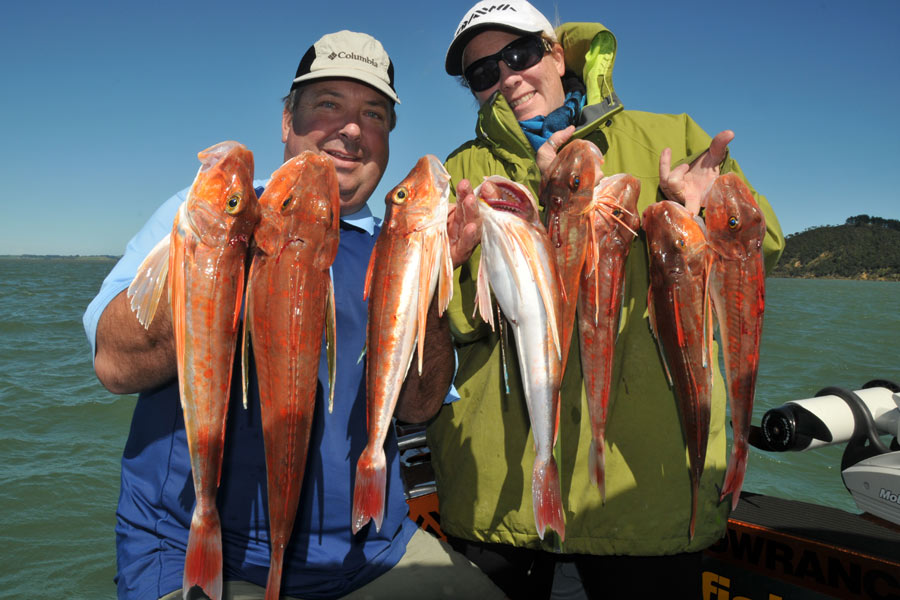 So what is there to fish for in northern inshore waters in winter? Certainly, the northern half of the North Island escapes the worse excesses of spiny dogs and red cod. If you stick to the inshore waters you can mostly keep out of the way of the barracouta, too. There are still snapper to be caught in winter, and later in the cold months the delicious tarakihi move onto the inshore grounds, as do trevally (usually following whitebait runs into northern harbours and estuaries) – but catching each of these species are topics for another time. Two types of fish that I particularly love to target in inshore waters during the cold months are gurnard and john dory: carrots and johnnies – the orange and the green.

The dory story
On the east coast, john dory are a prime winter inshore target. The good news is that they can be caught with a few tweaks to the winter techniques used for snapper, and on several occasions last winter a few JDs saved the day when the snapper were not playing ball. Despite all this subtlety, only a small number of ‘stalks’ are successful, so dory will seldom let anything that looks like a prey item go by – if they get a chance at it. I am sure that a lot of opportunities for dory on soft-baits are missed purely because the lure is being moved too fast for them to get into a position to suck it into that incredible extending mouth. The success ratio can be improved by slowing the lure’s retrieve as much as possible, allowing the fish a better chance at it.

Slowing the retrieve requires a few alterations in tackle. In shallow water, a light jig head will allow the lure to be fished more slowly, almost hovering above the bottom, without constant snagging. The weight needed to do this will vary with depth and current, so having a variety of jig-head models in the box is a good idea.

For this sort of winter work, I prefer soft-baits possessing good action at low speed. Grub tails, for example, are better than jerk shads at this time of year. A particular winter favourite is the Gulp! Crazy Legs in a ‘natural’ shade. These adjustments in tackle and technique work well on winter snapper, too, and some of them are pretty big fish, so be prepared for the odd epic battle.

Another option involves anchoring on the up-current edge of an area of foul and running a berley trail back into it, hopefully tempting the snapper to feed and bringing them out to your baits. Your berley trail will often attract a swarm of little snapper and jack mackerel to your boat, and they, in turn, are an irresistible attraction for john dory, which will hang around the fringes, awaiting their opportunity.
As I have said, dory are not particularly successful hunters, so giving them an easy meal in the form of a tethered live bait is a particularly efficient method of catching them. Live baits are usually on tap from the school around the berley bomb, and it is usually a moment’s work to catch a mackerel on a sabiki when you need one. For dory, use a single-hook ledger rig with a decent (6-8oz) sinker to hold the livie in position under the boat and prevent it from tangling other lines or the bottom. Black Magic Tackle makes a dedicated live-bait rig for JDs, incorporating a 360° swivel to help eliminate tangles. If making your own rig, use a big beak hook – size 8/0 or 9/0. Dory are not shy and good point clearance from the bait will give better hook-ups. Rig the baitfish through the scruff of the neck and be sure that the hook comes in from the correct side, so that the offset point rises up off the back of the bait when the shank is levered down towards the tail – as happens when a JD sucks the bait in headfirst.

I like a flexible rod for this work, as you can load the tip slightly and leave it set in the rod holder while drinking hot coffee and fishing for a snapper out the back of the berley trail. If watching the rod tip, you may notice that the bait becomes agitated – a good sign there is a dory or another predator about. The take is normally a single solid thump on the rod tip, followed by the rod loading further. Set the hook with a modest strike and work the fish in. Their mouths are quite a light membrane, so don’t be too rough (another reason to use a soft-actioned rod), and use a net to land them – sometimes just the baitfish’s spines are holding the dory, not the hook.
You can have the best of snapper and JD fishing at the same time, and often, as mentioned,  the dories provide the day’s highlights.

Carrot tips
While gurnard have been slowly making a comeback in the Hauraki Gulf over the last few years, they are still not in big enough numbers to be worth targeting. Rather, it is the big west coast harbours of the Manukau and Kaipara in my region that hold good numbers in the winter months. At this time of year, with the water often murky, I prefer to fish with cut baits on the sides of the channels (where current speeds are reduced) and at channel junctions.

I use ledger rigs, either of my own making or Black Magic’s ‘Snapper Snatchers’, ‘Gurnard Grabbers’ or similar, held down with a 4oz (or more if strong currents dictate) sinker. Gurnard love a bit of bling, and even my most basic rigs have at least a lumo bead on each branch line. When the water is murky from winter storms and the fish are hunting by smell more than sight, a berley trail is a big advantage.
My basic ledger rig has a sinker on the bottom and two branch lines above, each with a 4/0 or 5/0 circle hook. I prefer tapered triangular strip baits about 40mm long with the hook passed once through the wider end so it streams better in the current. Salted skipjack or mullet are good baits as they are tough and give off a nice oily scent trail that aids the gurnard in locating them. Scent can certainly be an issue. Last year Adam Clancey and I were gurnard fishing in the Kaipara. The skipjack bait ran out and we started using fresh-cut kahawai baits. They were not really doing the job though, and we stopped catching many fish until we resorted to adding Secret Sauce additive to the kahawai baits, bringing the fish back on the bite. It looks like the stuff is not only good on soft-baits.
Scented soft-baits, such as a Gulp! 4” grub tail, Peeler Crab or Crabby, mounted on a ledger rig, can work well, too. However sometimes less is more, and better results are had by pulling your punches a bit. There are times in winter when there are large numbers of kahawai (and sometimes sharks) in the west coast harbours, and while I don’t mind eating the odd kahawai, I prefer gurnard on the table. Kahawai are berley hogs and can be attracted in numbers that make it hard to get at the gurnard. Berley is important and I loathe not using it, but fortunately I figured out a simple rig alteration that, while not entirely avoiding the kahawai, certainly results in a much greater percentage of gurnard caught. As well as oily cut baits, soft-plastics that have lots of movement in the current, like this Gulp! Crabby, are also effective on gurnard.

It is not complicated: if the kahawai are too thick on the ground, I remove the top hook of the ledger rig altogether and reverse the sinker and bottom hook positions so the sinker is above the lower hook. In practice this has the sinker on the channel bottom with the bottom hook also lying on the bottom about 20-30cm behind it. The bottom-hunting gurnard are much more likely to find the bait before the mid-water kahawai. This simple reversal of the hook and sinker positions often produces about an 80% gurnard catch, rather than the 80% kahawai catch resulting from the use of a standard ledger rig.
Both gurnard and john dory, while they may never be classed as ‘sportfish’, are superb on the table, so are very welcome and satisfying catches at a time of the year when feeds of fresh fish can be few and far between.