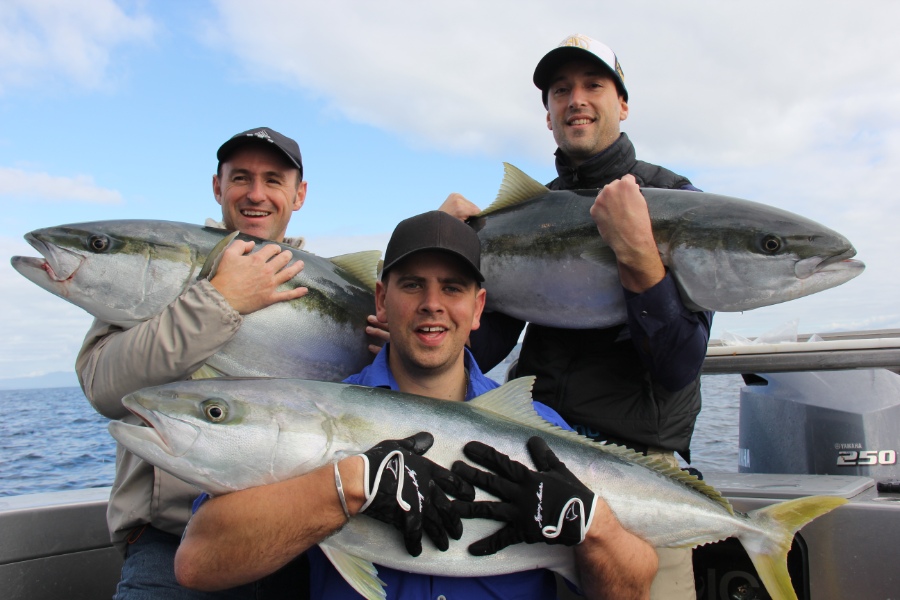 Kingfish (Seriola lalandi lalandi) are New Zealand’s most accessible gamefish, offering size, power and guile to challenge Kiwi anglers fishing from the shore and from boats.

Kingfish belong to a large and worldwide family of fishes that include trevallies, jacks and jack mackerels. In New Zealand, the family is represented by (yellowtail) kingfish, trevally, at least three jack mackerel species, koheru and a few rare or occasional visitors, such as amalco jacks, samson fish, amberjacks and pilotfish. Kingfish – haku or kahu in Maori – is the largest jack species in New Zealand, growing to 50kg-plus and nearly two metres in length.

Restricted to the Pacific and Indian Oceans, kingfish sub-species are present in warm temperate and temperate waters around the world. One species ranges from northern Mexico and the west coast of the USA to southern Canada (lalandi dorsalis); another is present on the Asian side of the Pacific in Japan, Korea and China (lalandi aureovittata), while our southern species (lalandi lalandi) is present in Chile, Easter Island, and other South Pacific islands outside the tropics, Australia, India and Southern Africa. All are closely related and virtually indistinguishable from one another.

The largest kingfish specimens in the world are caught around New Zealand. 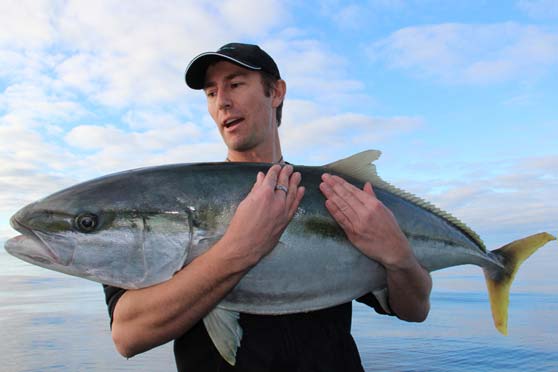 Kingfish inhabit rocky shores, reefs, pinnacles and the turbulent waters surrounding offshore islands in waters up to 200m deep. Juvenile fish are pelagic, free-swimming far out to sea and often gathering under floating objects. Adults are sometimes described as ‘semi-pelagic’ and occur mainly in open coastal waters. They patrol coastlines and reefs, entering shallow harbours in search of food and frequenting most marine habitats at various times, taking advantage of whatever food sources are available. Some fish take up residency on suitable reefs, seldom moving far from home.

Kingfish have been reported from right around New Zealand, including Stewart Island and the Chathams, but they are seasonal visitors to southern waters and much more common in the north. Kingfish hotspots include the waters of Northland’s east coast and the Bay of Plenty-East Cape area.

Kingfish grow quickly at first, reaching 2-3kg in their first year. The most recent studies indicate that females reach sexual maturity at around 5-7 years when they are between 78 and 128cm and males between 75 and 93cm. Earlier studies concluded that sexual maturity was reached at 70cm, which is why the legal size limit for kingfish is set at 75cm.

Kingfish may live for up to 20 years. Spawning takes place in spring and summer when water temperature is around 20°C. They are thought to free-spawn in moderately deep coastal water near the surface, though this behaviour has never been observed.

Best Knots and Rigs for Kingfish

Kingfish will take a variety of natural and artificial bait, including jigged and trolled lures. They are particularly susceptible to livebait, with jack mackerel, piper and koheru favoured to target average-sized fish and live kahawai for larger fish. Kingfish of all sizes will take smaller livebaits at times and soft plastics work well, particularly lures in larger sizes retrieved quickly. Kingfish will also take a variety of other baits, whole or in pieces and whole piper, flying fish, squid and pilchards, as well as pilchard, squid and skipjack pieces will work too.

Check out our article on everything you need to know about high-speed jigging here - probably one of the most exciting ways of catching kingfish. Surface poppers and stickbaits are also effective, as are bibbed lures like Rapalas. Trolled skirted lures also work, but all lures need to be equipped with good quality hardware.

Soft baits are dynamite, especially if retrieved quickly across the surface or allowed to sink deep and then retrieved quickly. Larger sizes work best, with elongated ‘fish-like’ profiles the most consistent performers.

livebait rigs can variously be slow-trolled, cast and slowly retrieved, deployed at depth using a sinker, or at the surface under a balloon or float.

Kingfish can be caught from shore or from a drifting or anchored boat.

Tackle used needs to reflect the size and power of kingfish. Large fish require heavy tackle, especially since kingfish often inhabit reefy territory and are amongst the most powerful fish in New Zealand for their size.

Lines are typically 15-37kg for livebaiting or trolling; often more for mechanical or vertical jigging where 40-50kg superbraid is often used. Lighter line can be used when softbaiting, spinning or livebaiting small baits for school kingfish. Saltwater flyfishing tackle also works well, though large fish are a real challenge.

Whatever their size, kingfish fight hard, never giving up.

Every aspect of an angler’s gear needs to be up to the task. Trace material should be a minimum of 40kg, depending on bait and hook size, and up to 100kg; swivels should be sturdy and hooks strong enough to land powerful fish. Hook sizes are typically 7/0 to 12/0, depending on bait size. Livebait patterns are perfect for livebaiting, but any strong short-shank hook, including circle hooks, is fine.

Overhead or good quality spinning reels with the line capacity and drag performance to handle kingfish can be used. Rods are usually either heavy spin-casting or baitfishing models, or else short stand-up designs. Landbased fishing rods are longer.

Commercially made livebait rigs are available, but they simple to make yourself. A metre or two of suitable trace, a hook and a swivel, coupled with a sinker or float/balloon is all that’s required to fish livebaits. Alternatively, dispense with the weight or balloon and slow-troll the bait 10 or 15m behind the boat. Be sure to bridle-rig or nose hook the bait, rather than hooking it through the shoulders as is normal for a float rig.

Kingfish seem to come on the bite for short periods before turning from voracious eating machines to laid-back cruisers. It can be very frustrating to be surrounded by large schools of kingfish that studiously ignore everything you offer them. Kingfish tend to feed when there's some current flowing.

Hook-ups often occur with the first drop or two of a jig or livebait, before the fish become suspicious and the bite shuts down.

Often there’s a good bite just before dusk and sometimes early in the morning, but bite times can occur any time during the day. Like many fish, kingies seem to bite best when there’s a bit of tide running. In harbours and estuaries, the incoming tide is usually better; from rock ledges, one tide or the other may fish best, depending on the location.

Summer is the best time to target kingfish however they can be caught year round with winter fish tending to be less common but generally larger. Smaller kingfish will often be found around channel markers and wharfs in the warmer summer months.

This is another species that put New Zealand on the map as a major sport fishing destination. Kingies reach their maximum size in New Zealand with almost all world records coming from our waters.

The all tackle world record stands at 52kg, two fish of identical weights have been caught in both 15 and 24kg line classes. Both fish came from the Bay of Plenty.

These big powerful fish are relatively plentiful and easy to target, but landing them is another story altogether as they are virtually unstoppable and normally inhabit relatively foul areas.

Generally the rule of thumb is that if you can find a reef structure with reasonable current, you'll find baitfish and predator kingfish.

The hot spots are the Three Kings islands, White island and the Ranfurly bank off East Cape. They are found consistently throughout the top half of the North Island in good numbers and as far south as the Marlborough sounds at the top of the South Island.

Landbased fishers also do well around the rocky Northland Coast, the Coromandel and around the Lottin Point-East cape region. There’s good fishing in the Hauraki Gulf and off the west coast in places. Many northern harbours experience seasonal runs of school kingfish, which really brighten up wharf fishing, and during summer even beach anglers can target kingies.