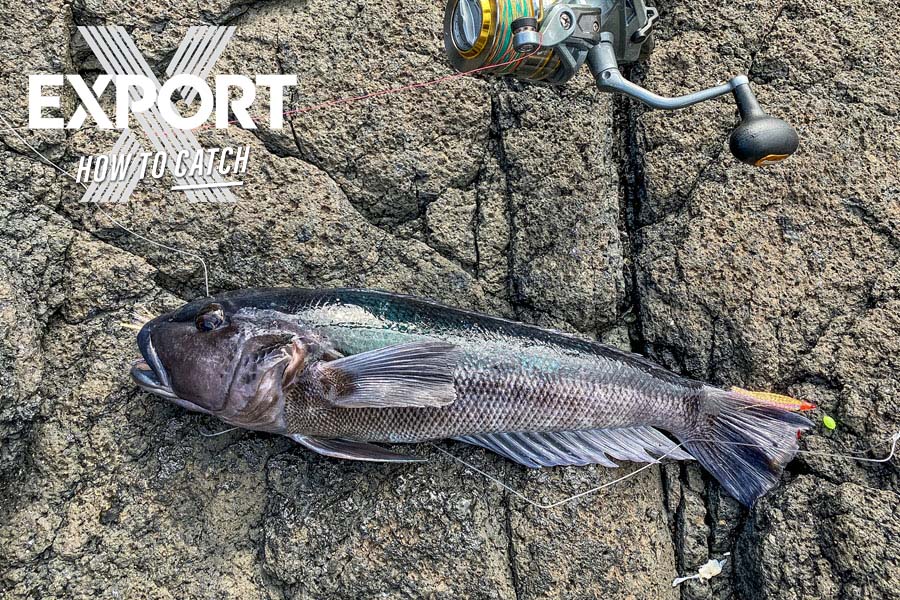 Irrespective of their modest size and pugnacious looks, blue cod have long been a staple species for southern kiwi anglers. And no wonder. They can be found right up in shallow water, they are easy to catch, and their delicate white flesh makes them one of the tastiest fish around.

Blue cod grow to around 70cm and are voracious, opportunistic scavengers. They will eat just about anything presented in their vicinity, including baits and lures of appropriate size. In one location, 52 different prey species were identified as part of the blue cod diet!

Juveniles have a whitish body with two brown stripes running their entire length and maturing fish darken to brown and then a mottled grey. When they reach about 30cm, a further change to green or blue occurs, from which the species draws its name.

Blue cod are hermaphrodites, with individuals over a large length range changing sex from female to male. Spawning occurs in coastal and outer continental shelf waters and varies in timing between locations from late winter to early summer.

Blue cod are found right around New Zealand from Stewart Island to the Three Kings Islands but are especially prolific in more southern climes. Stewart Island, the Chatham Islands, Foveaux Strait, and along the Fiordland coast are well-known blue cod fishing meccas.
Predominately inshore bottom-dwellers, blue cod are commonly found near reefs and around rocky areas, although they can be found over mud and sand too. In many areas, blue cod have a clear preference for areas of rock and weed running off onto sandy bottoms.
Blue cod are incredibly inquisitive and extremely territorial and will often approach divers and nip their fingers. Because of their territorial nature, they are susceptible to overfishing. Blue cod feed during the day, with activity peaking at dawn and dusk, and appear not to feed at all during the dark hours.

Although blue cod are territorial, in some areas there appear to be seasonal movements into shallower waters. For example, in northern areas like the Bay of Plenty and Hauraki Gulf, they seem to be more prevalent inshore during winter.

Once located, finesse is generally not required to hook a few blue cod. As blue cod are not strong fighters, they can be caught on very light tackle. However, reasonably heavy gear is often used due to the reefy ground they tend to inhabit and the harvesting attitude of many cod anglers. In some remote areas, a bit of 8mm rope with several large, long-shanked hooks spliced in and half a sash weight added to the bottom serves to harvest a feed of cod. And the bait? Why, blue cod, of course! Blue cod are absolute suckers for a baited ledger rig and will take most baits. They are not picky about old smelly bait either, sometimes seeming to prefer it to fresher stuff. Try to cut strip baits so there’s some skin on one side to help it survive the nibbling and ragging of other reef fish and small cod until a reasonable fish comes along. In all cases, make baits slim; while cod have big mouths for their size, thinner baits are more easily gulped down. If there is a ‘secret weapon’ bait for blues, it is probably pāua gut.

Add this to a flasher rig, and you should catch pretty much any cod that swims.
Although cod are effectively caught with nylon mainlines, braid is far better for cutting through tidal flow, transmitting bites and providing hook-ups. Use reasonably large hooks to deter or avoid the smaller cod present, and as blue cod spin and twist around while being retrieved, swivels are an important component to remember.

Lures of many varieties will attract the curious blue cod. A simple and effective technique is to drop the lure to the bottom and yo-yo it up and down. Soft-baits, sliders, inchikus, and slow-pitch metal types can all be applied in this way and are best rigged with single hooks for easier unhooking.

If soft-baiting, err on the heavier side of jig-head to ensure more bottom time. Blue cod don’t have a lot of bulk to set big hooks into, so jig-heads should be armed with small and sharp hooks. The tougher brands of soft-baits are also recommended to counter their nasty wee gnashers.

Mark Kitteridge teaches us how catching blue cod on poncy lures can be loads of fun!... Read More >

How to catch Blue Cod

We might be able to hear the reactive screeches of outrage from up here; Mark Kitteridge, a JAFA (Just Another Friendly Aucklander) of almost 30 years,... Read More >

How to catch blue cod from the shore

Forget the fishing stories – here is a quick review of the current scientific facts about the biology of blue cod.... Read More >

in The Briny Bar
39 minutes ago
kitno

in The Briny Bar
3 hours ago
Pcj