Like them or not, soft-baits have made such an impact on Kiwi fishing that they are well and truly here to stay. Whether you’re an avid soft-bait user, or still waiting to be convinced, this article will give you a better insight into what you can do to increase your bite-making potential. Adam Royter explains…

One of the many drawcards of soft-baits is the variety of tail shapes – everything from stick baits to pulse worms are in the mix these days! There are also multiple variations of the same style of tail shape so there’s no shortage of options.

Hit your local tackle store up for more info on the baits you think you might need. Never question your theory as to why you want it. If it makes sense to you, then that’s all you need to consider. If I listened to everyone that said, “that won’t work”, I certainly wouldn’t have been in a position to write this article! Go with your gut – there’s never a wrong move to be made on the soft-bait chessboard!

Slow Roll: Only winding the handle when retrieving. Done at a slow or medium pace.

Rod Tip Flick: This is a short, sharp, fast movement of the rod tip. Imagine flicking someone on the backside with a tea towel! It’s the same motion in reverse, and it needs to be directed down the line to the lure.

Hop: A rod tip hop is different from a rod tip flick because it requires the rod tip to move upward, dragging the lure through the water. Several of these in a row can see your lure move two metres or more!

Burn & Kill: From a stopped position, wind the handle several times as fast as you can and then stop again (for a few seconds). Then repeat the process. This is an excellent retrieve for fast, agile fish that hunt bait and works particularly well with self-swimming SB’s (soft-baits).

Dead Stick: A method of fishing SBs where you do nothing at all apart from place the SB where it needs to be in the water column. Curiosity also killed plenty of fish!

On the Drop: This refers to when your SB is falling to the bottom after a cast is made or after a retrieve. The best drops go unrestricted from a tight line.

Also known as the T-tail, this shape is traditionally used to imitate small forage fish and/or baitfish. A self-swimming SB, paddle tails need nothing more than water to pass by it to create its complete action. Paddle tails generally have a fish profile, although they can have a tubular-shaped body. This is one of the best SB shapes you can fish. 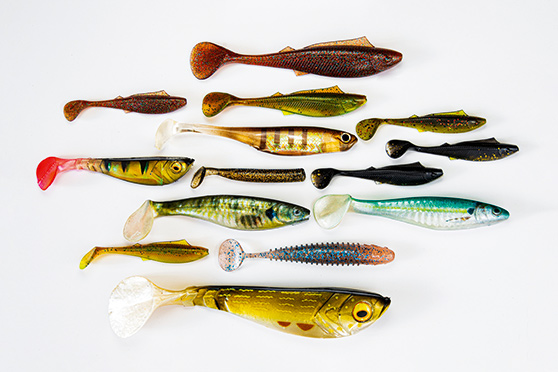 The paddle tail - these baits are such a classic go-to because of the fish profile and inbuilt action. There's hardly a fish alive that won't eat them!

Bait size range – Commonly from three to six inches, paddle tails are perfect for all water types except depths over 40m. Because of the SB’s tail shape and action, they create a lot of water resistance past this depth, which slows up the drop speed.

Rigging – Best on a jighead.

Retrieves – A slow roll still stands as this bait’s most popular retrieve. A slow roll with one or two quick hops to create the ‘fleeing baitfish’ action is also a winner.

Also known as minnows and jerk shads, these are one of the most adaptable SB’s ever created. Another baitfish look-a-like, the stick bait has an entirely different body and action profile to most other SB’s. Whereas a lot of other SB’s have a built-in action, the jerk shad has none. This is not to say that it’s lame! What it does is hand the steering wheel over to you! With your rod tip movement and winding ability, you get to create 100% of this bait’s action. You can have a little, or you can have a lot. You can even have none! Regardless, it’s all up to you when you pin one of these fantastic baits onto a hook. The stick bait - the writer's desert island scenario bait. If he could only have one SB, this style would be it! Its adjustability and slender profile gives it the win.

Bait Size Range – This range has one of the broadest size categories around – from two to nine inches. With a slender body profile, the stick bait is a classic deepwater bait and has zero restrictions on the drop. And at the other end of the scale, used with very little weight (1/24-1/40), a 3” minnow will dance in the water like an aquatic Michael Jackson!

Rigging – Jighead or weedless worm hook (WWH). The WWH is best used when the SB has a belly slit.

Retrieves – Because this bait has no in-built action, the sky is the limit! Most people prefer one or two rod tip flicks, then a turn or three of the handle, but never underestimate the power of the dead stick! The stick bait is the king of baits for this technique, especially when dealing with fish species such as kingfish, tarakihi, snapper and blue cod.

Also known as a grub tail or twister tail, the curl tail was invented in 1972 by the Mr Twister company, only five years after the first plastisol SB’s had been made. They remain one of the most popular baits of all time, which should tell you something! The curl tail has a mesmerising action – like a rotating corkscrew. Its wiggly looking action makes for quite the commotion at the tail end of the SB, which means the body doesn’t need any added movement. This being the case, you can run a hook right down the length of the body. Doing this to other SB’s would inhibit their action. The curl tail - the OG bait. This long-standing SB has the 'come and eat me' action written all over it!

Bait Size Range – This is another SB with an extensive range, however, it’s not as broad as the stick baits’. You’ll find curl tails from two to eight inches, although most are 2”, 4” and 6”.

Rigging – Almost exclusively a jig head! However, you can fish them across the surface with an unweighted hook.

Retrieves – Possibly the reason that it’s such a good all-rounder is that it can take on any retrieve you throw at it! One of the best methods is to drop it to the bottom, hop it two or three times and then let it fall back to the bottom again (it should take a few seconds to do so). Keep in mind that like the paddle tail, this bait has a lot of drag and won’t fish well in deep water!

Because of its loose-tailed nature, the grub is always in motion no matter what you do. Fish love this SB!

The mighty creature bait! For all intents and purposes, anything that has an arm or leg gets lobbed into this category.

These are the SB’s that look like real things (sometimes) – crabs, spiders, koura, shrimp, barbie doll legs and pretty much everything else!

The beauty of them is they allow you to step away from minnow style SB’s and start looking outside the box. Fish spend a lot of time foraging, picking things up and tasting them – they don’t ever have a set menu! Working in the realms of the creature bait, you can tap into a whole other side of the fish’s diet and put more fish in your bin. The creature bait - it will get you fish in heavily worked waters every time. Think outside the box!

Bait Size Range – Creatures are sometimes hard to get a handle on in regard to size – so many legs and bits everywhere! But the pack will always state a scale, so you have to feel your way around it. Starting at 1” and ending around 7” for the most common creature baits, you want to be more concerned with what you’re trying to imitate rather than scaling up and down in size.

Rigging – Almost every style of rigging imaginable. But to make it simple, a common jighead will do the trick!

Retrieves – Looking at what most creatures do when being attacked, you’ll need some rod tip flicks in there somewhere. Squid, crayfish and frogs all have a jerky response to being attacked. However, putting your creature in ‘the zone’ is far more important than how you retrieve it! I’ve never seen a rock lobster doing backstroke on the surface in 50m of water, so get it to where it needs to be! 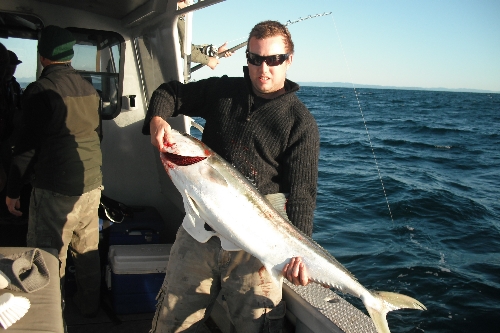