No other outdoor pastime generates so much wider social commentary than whitebaiting.

It is an integral part of life – in our blood, so to speak – or should that be in our waters?

Anyone with an interest in whitebaiting has to read the photographic essay Whitebaiters Never Lie – Exploring an iconic Kiwi Culture by Anita Peters and Murray Hedwig. It will certainly get your mouth watering and, through reading it, you quickly get an appreciation about how specific whitebaiting techniques can be to various locations.

As each year goes by, we are seeing more outstanding publications about whitebaiting, which reinforces the importance that whitebaiting has in our culture. Going ‘baiting is a fantastic recreation. You can make it as energetic or as relaxing as you like, and that flexibly fits in well with our Kiwi ethos.

Familiarise yourself with a range of techniques

It certainly pays to have a range of whitebaiting techniques up your sleeve. Scoop-netting the incoming surf on the stony beaches of Canterbury’s coastline is a distinctive style, with the Temuka scoop-net often used. However, it is hard work and risky; whitebaiters are swept off their feet and into the surf almost annually, so life vests should be worn. 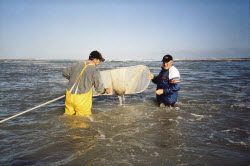 Larger scoop-nets are used in larger river mouths to work the lagoons and river channels with gentler currents, while set-netting is the most relaxing form of whitebaiting, being especially popular on the edges of large, slow moving rivers. Yes, every location has its own techniques, which have been developed and proven over the decades. So it is a matter of watching the locals and then gearing up yourself. Whitebaiting really allows Kiwi ingenuity to shine.

Using the net (no, not the whitebait net, the Internet!)

Yep, you can now go whitebaiting without getting your feet wet by virtual whitebaiting. Check out the vast number of video clips on YouTube – a great way to learn local techniques. It is amazing just how many tips you can pick up while watching the short homemade movies that people have on YouTube. There are also some great articles about whitebaiting online. The DoC website provides some good information on regulations for each region. For me, one of the most informative YouTube clips about the biology of whitebait features an interview with eminent whitebait researcher, Dr Bob McDowall; check out the following URL: http://www.youtube.com/watch?v=26pex7UzRgw&feature=related. 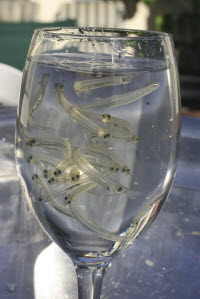 One of the most exciting aspects of whitebaiting is that, once in the sea, whitebait shoals can turn up anywhere on the next spring tide; young whitebait do not necessarily return to their river of origin. This wandering tendency is particularly true for inanga, which make up 95% of the whitebait catch in New Zealand.

Whitebait spawn in the autumn. Over the winter months during their growth phase, ‘bait are often at the mercy of ocean currents. For example, very large whitebait catches can occur ‘out of the blue’ at very small river mouths For many ‘baiters, despite the frustration and often long periods of empty nets, it is this Lotto aspect of whitebaiting that makes it so exciting. You never know for sure where and when that large shoal will turn up.

Optimising your time on the water 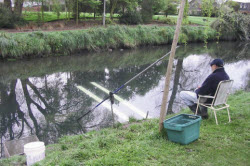 Often the best catches of whitebait are made a few days either side of the full moon, on the highest of tides. Having tide tables on hand will allow you to predict the best times to go fishing. Better catches of whitebait are often made after there has been some rain, which increases the rivers flow. Combine fresh rainfall with a high, incoming tide and you have ideal whitebaiting conditions. I prefer overcast days for whitebaiting, but if whitebaiting on a sunny day, pay close attention to the riverbanks, as the ‘bait will often run hard up against the bank.

Spring tides are favoured for the best catches of ‘bait. While the season can be slow in August and September, October and November are my favourite months for whitebaiting. The combination of increasing water temperatures and spring tide, perhaps after a little rain, create the ideal conditions for ‘baiting.

On any day it is often the final push of the incoming tide that sees the biggest whitebait shoals coming in. Timing is everything, so having a range of whitebait nets ready to go at short notice is important. Modern technology, such as cellphones, is great for keeping in touch with a few close mates. For all the time that people spend whitebaiting, I would dare to say that 95% of the whitebait are caught within a very short timeframe, perhaps 5% of the total fishing time. Again, timing is everything.

An opportunity to tune in to nature 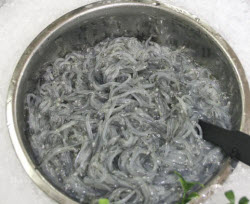 For whitebaiters, watching the birds often gives clues as to whether ‘bait are running or not. Gulls and terns will often hover above the surf when the bait are running, acting as good markers. Shags will also chase whitebait shoals, so the presence of shags can be a good indication that something is happening below the surface. Other birds, such as white-faced herons, can be seen slowly hunting river banks, sending the shoal scattering when their spring-like neck shoots their pointed bill below the surface.

Sea-run trout swirling on the surface is another good indication that the whitebait are running.

One of the fun aspects of whitebaiting is that it gives you time to tune into natural rhythms and observe other wildlife (in addition to other whitebaiters!).

Whitebait are pretty wary little creatures, responding quickly to any sudden movements, especially after being chased by herons, terns, shags and sea-run trout all day. So avoid any sudden, unnecessary movements – whitebait are particularly sensitive to shadows suddenly cast onto the water – and wear dull, natural-coloured clothing. That’s why many netters wear camouflaged clothing when at the water’s edge, as this helps them to be less obtrusive.

Release any unwanted fish – after all, it is the clear-bellied whitebait we are after. Consequently, those whitebait with dark bellies and adult whitebait, along with other fish species caught, should be released in as good a shape as possible.

Once I start catching some ‘bait, I place them in a bucket with some iced water in it. Keeping the water slightly chilled often helps to keep the bait alive for longer, and it is undoubtedly the freshest bait that tastes best.

Good luck on the next tide.

Nik Key hosts a team from NZ Fishing News on his charter boat, Mana Moana. Nik knows how to catch fish on lures in the Hauraki Gulf, and thi... more >

Sounders, also known as fish finders, are one of the most essential piece of kit to have on your vessel. Adam Clancey shares his take on und... more >

Seabirds are great indicators of where the fish are. Here, what each bird means for fishermen is discussed, and some helpful advice on how t... more > 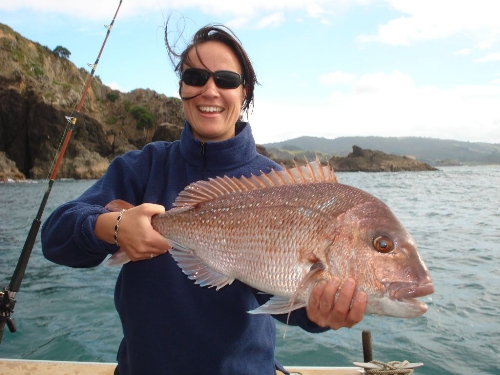