While outboard manufacturers go to great lengths to protect their product from the harsh environment it is expected to operate in, there are ways boaties can extend the working life of their motor. Heading this list is engine flushing. Grant Dixon talks to the key outboard distributors to seek their input as to why and how to flush your outboard after marine use…

There are three main ways of flushing an engine. The most popular is the use of muffs that fit over the lowest water intake while the motor idles; the second option is the use of the ‘coastal flush’, where the hose is attached to flush port and gravity feeds the water through the engine which is not run; the third way is to use a flush bag. The bag sits under the bottom end of the outboard and filled with water. The engine is turned on and allowed to idle, drawing the water through the cooling system as normal.

Mercury’s Dean Villis says the conventional muff system gives the engine the best flush. He says a motor should be run at idle for around 5-10 minutes, time enough to allow the thermostat to open and flush all parts of the internals that have been exposed to salt water.

“The flush port generally gets used when you have low water pressure, come home late and don’t want to wake the kids, or you are on a moored boat,” Dean says.

“The water starts at the top of the powerhead, and because of gravity, it finds the easiest path down. The water pump is only getting enough water to lubricate it at this point, so we don’t run the outboard.”

He says that not every single area of the outboard might get quite the same flush as you would with using a pair of muffs.

“With the muffs, the water is coming up from the bottom and can only exit when it has filled up every cavity that it would have when it was running in the salt water.”

Some manuals recommend the removal of the propeller when flushing an outboard, which is a safety thing.

“In some cases, smaller outboards have the water pick up under the anti-cavitation plate, and that’s where you fit a special flushing device, sometimes this can be difficult with the prop on.”

In this situation, a flushing bag is useful. 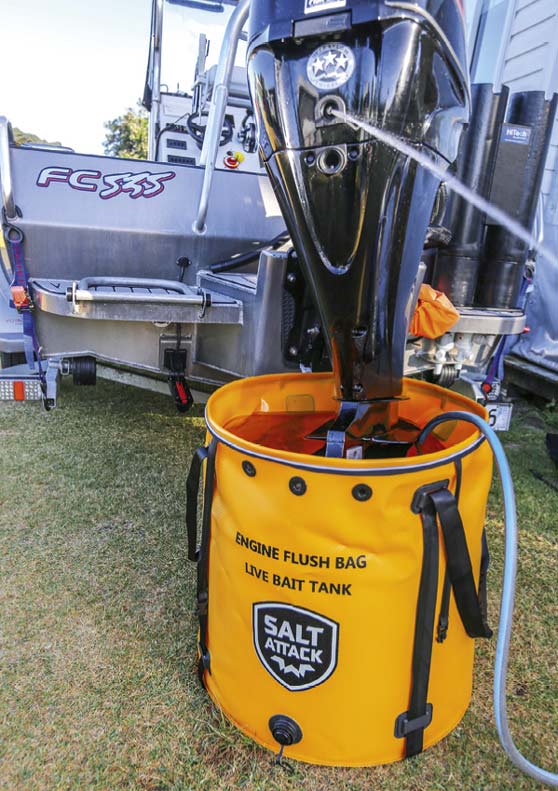 Using a flush bag replicates the circulation of cooling water throughout the outboard. Products such as Salt-Away can be added to battle corrosion. The Salt-Away bag, which folds down flat for storage, doubles as a handy livebait tank. 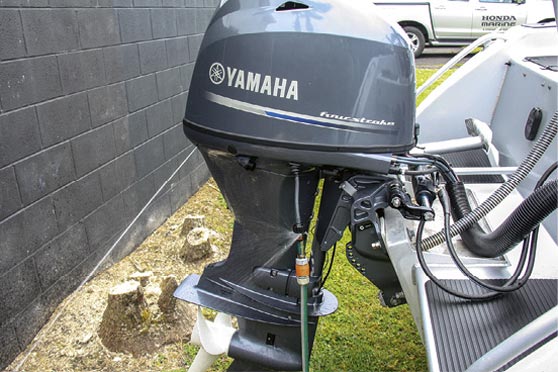 Yamaha recommend flushing their motors for at least 15 minutes

Yamaha’s Pete Dick says all water, fresh or salt, contains contaminants that will eventually build up in the cooling passages over time.

“Saltwater is naturally corrosive and any remaining in those cooling water passages after use is left there to do its worst, unabated,” Pete says.

Saltwater can also experience crystallisation when exposed to heat above 170 degrees, which causes deposits to form and potentially restrict cooling water passages.

“For these reasons, it’s a must that you flush your engine thoroughly with fresh, clean water after every use.”

The first is using the built-in flush attachment, especially if you can’t remove your boat from the water, or if your outboard has dual water inlets and you don’t have a special adapter.

Thirdly, the flush bag method can be used for a boat on a trailer or when moored. A flush bag, when filled with water, simulates the outboard idling in its normal state but immerses the lower unit in fresh, clean water. Place the bag around the outboard, attach the hose, and fill the bag. Ensure the water level reaches the height of the outboard’s water pump. Start the engine and run for 15 minutes in neutral. 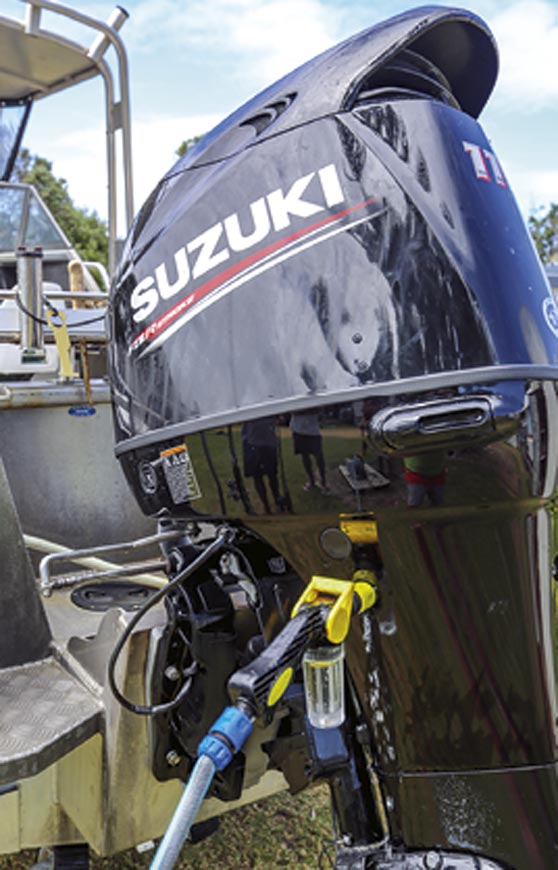 “Flushing your outboard prevents salt crystals and foreign matter from gathering within the water passages and damaging the water pump impeller,” he says.

”The preferred method for Suzukis is to flush with a flush-muff attachment on the gearbox or built-in port.”

“With flushing muffs, run the engine at idle speed in neutral for five minutes while monitoring it at all times for proper water flow out of the tell-tale outlet.”

There are three possible flushing ports on different models of the Suzuki range — either on the port side of the engine midsection; on the rear lower engine cowl and at the front side of the lower cowl (only remove one of the port plugs).

“The engine must be stopped while flushing or the water pump impeller can be damaged; flush for five minutes, then ensure the engine drains completely. The engine can also be flushed in the tilted position without the engine running, but must be returned to the vertical position to drain afterwards.” 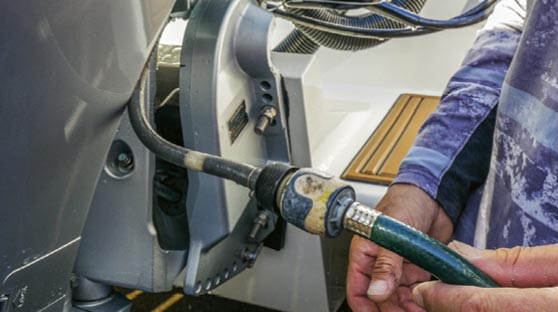 Many modern engines have a flush port to which a standard household hose can be attached to flush the motor without the need to start it. 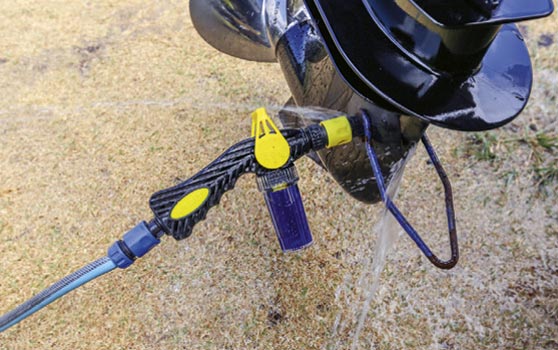 This mixer ensures just the right amount of Salt-Away run through the motor to breakdown and remove salt deposits.

Products such as Salt-Away can also be put through the motor when a flushing port is used. 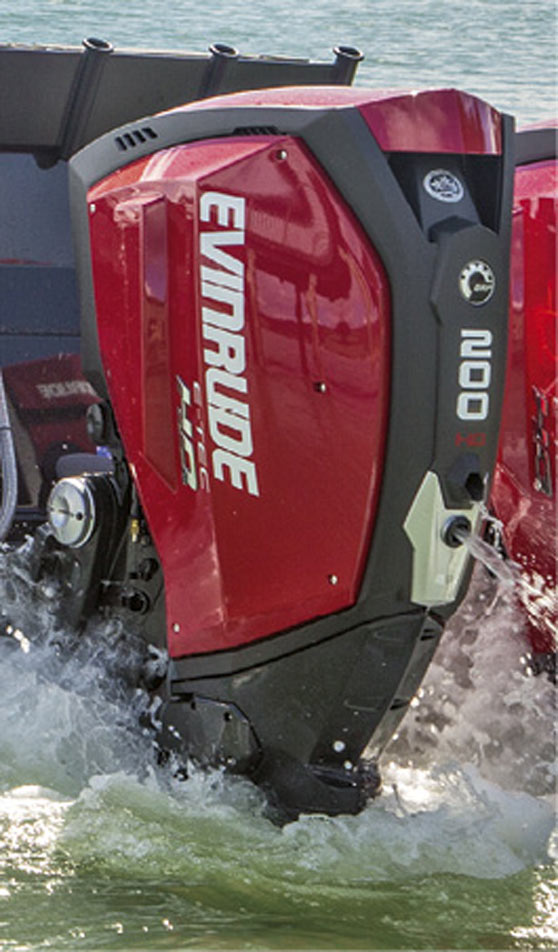 Evinrude’s Kevin Sharp has quite a different view to engine flushing.

“As far as I am concerned, Evinrude does not recommend an earmuff style flusher,” he says.

“Every Evinrude operators guide I’ve read over the years makes no reference to running the engine while flushing. To me, that means NOT recommended.”

Evinrude motors can accept the common style garden hose adapter that screws straight into the rear of the engine.

“The engine should be in the normal upright position, and the hose turned on for several minutes, then it should be left in this position long enough for the system to completely drain.

Keeping it in this position for long-term storage ensures the engine can completely drain.

“There is also less chance of rainwater entering the powerhead. The trim and tilt rams are fully retracted, reducing the chance of corrosion of the rams.”

Evinrude E-Tecs have another unique feature. The engine can be “winterised” at the helm which requires running of the engine.

Kevin stresses that boaties should consult the operator’s guide for their engine. “In all cases, the engine must be in the vertical position during flushing and after, to drain the water from the engine. Smaller engines - 2 to 20 hp - can be flushed in a small container such as a flushing bag, small bucket, or can,” Cameron says.

For engines 5 hp and up, an optional flushing attachment is available that allows flushing the engine through a port on the side of the gear case.

Honda’s only recommended flushing procedure for its larger engines – 60-250hp - is to use the factory flushing port connected to a garden hose with the engine not running.

Cameron says the reason not to run the engine when using the silent flush port is than there is insufficient water flow around the water pump impellor which could suffer damage as a result. 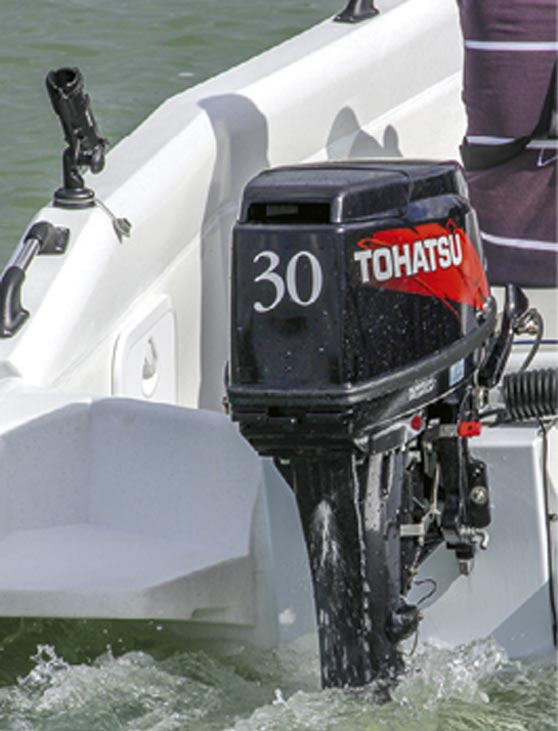 Diversified Product’s Bob Tait whose company imports Tohatsu outboards, says for smaller engines (2HP-6HP) operators should use either the optional flushing plug or a small container such as a garbage can or tub filled with fresh water.

“For larger engines, use the flush port or a set of flushing muffs. Water pressure should be set to ensure continuous flow to the intakes, and the engine should be run for 5-10 minutes.” 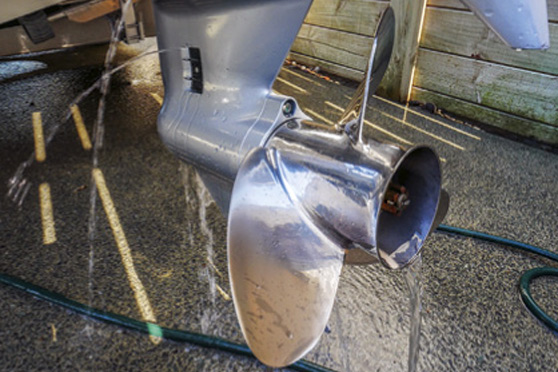 A flush port relies on gravity to feed to water through the system without having to turn the motor on – something your neighbours will appreciate.

Salt-Away – a first line of defence

There is no doubt that salt is the enemy when it comes to any metal items it contacts.

Products such as Salt-Away are great for not only removing salt from an outboard but the likes of trailers and fishing tackle as well.

We have always used Salt-Away products on our magazine project and personal boats, ensuring that when they are on-sold to the next proud owner, we have done everything reasonably possible to ensure corrosion has been kept at bay.

This has meant using Salt-Away to flush the outboards and stern drives, as well as an overall vessel wash-down.

Shane Housley, whose company Wholesale Marine Direct distributes Salt-Away and related products in New Zealand, says the product is not only useful for flushing out motors but anything that comes into contact with salt water including trailers, fishing tackle and tow vehicles. It is even recommended for use on seaside houses.

Part of the Salt-Away system is a mixing ‘gun’ that can be adapted for use with outboard muffs or as a spray unit.

He recommends 40-50mls of product concentrate be used in the mixer cup for motors under 90hp, and 80-100mls for bigger outboards.

Shane says it is important when using either muffs or a flush bag to run the motor for 5-10 minutes to allow the thermostat to open. 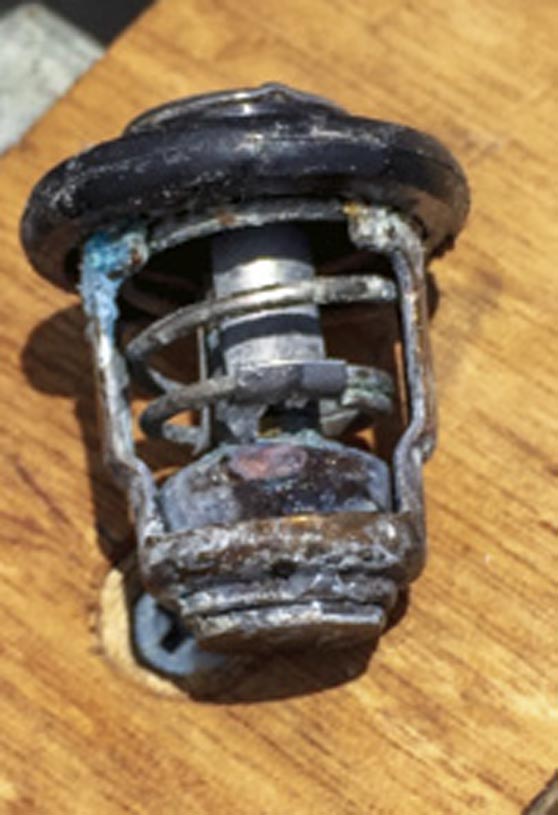 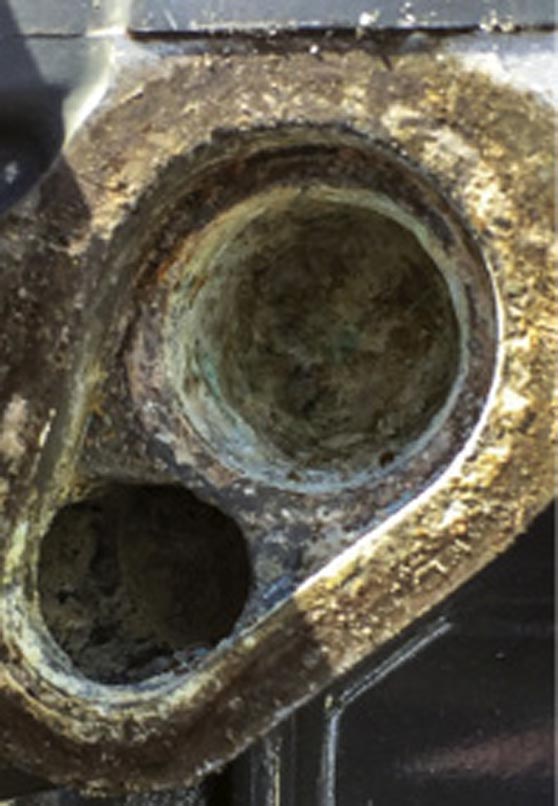 The owner of this outboard says he 'religiously' flushed his motor. The corrosion around the thermostat and housing suggests he should have kept the water running for longer.

The mixer should be turned to ‘Rinse’ for this period and then turned to the ‘Salt-Away’ position and run the product through the engine for up to a minute before turning the mixer off.

It is essential to turn the outboard off at the same time, allowing the Salt-Away mix to break down heavy salt build-ups undiluted. The engine should be trimmed up, so it holds more water in the engine block to enable salt-away to do its job.

“When flushing engines, lift the engine idle to 1500RPM to increase water pressure, so more engine components are flushed. Many modern engines idle at a very low RPM (600-700) compared to the older two-strokes, and this results in parts not being adequately flushed, as there is less back-pressure,” Shane says.

The important thing is not to flush the motor again with freshwater which will dilute the effectiveness of the Salt-Away.

The dispenser gun has been designed to deliver the required amount of Salt-Away into the engine’s cooling system, something it took developers two years to get right.

Salt-Away is ideal when winterising your rig. It is suggested the flushing process is repeated every 24 hours for 3-5 days before putting the boat away for some months. 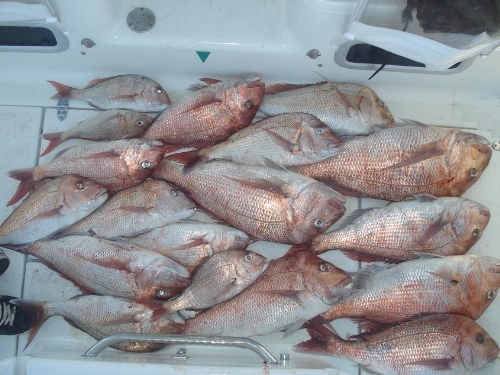