Keeping Baits On The Hook When Surfcasting - Part 1 The sometimes explosive forces generated by casting baits well out into the surf can blow some of them, especially the softer ones, to pieces.

Even when the bait splashes down, the impact can turn it into a mess that is little more than an unrecognizable blob. Any decent current, as is often present when fishing off a beach, will then turn the remainder into a sort of useless fish mince! All that time spent on making a presentable bait quickly becomes wasted.

Thankfully, all that’s needed is a bit of good old-fashioned bondage. Don’t get too excited, I’m just talking about tying the bait onto the hook with either cotton or bait elastic. There are advocates both for and against cotton or elastic but both, to varying degrees, do the trick.

Whatever you use, however, don’t overdo it. Winding until you have something that looks like an Egyptian mummy may interest archaeologists but leaves a decent fish scratching its head and wondering “WTF is that!”

I also firmly believe that if you’re using a two-hook trace, the hooks should be at approximately 90 degrees to each other. In other words, one should be vertical and the other horizontal. A good example of this is in the pilchard bait photo in the bottom left corner.

I’m also a fan of fixed hooks rather than freely sliding keepers. Think about it, how can a freely mounted keeper actually “keep” anything from sliding? The force of the cast will make your nicely- presented bait bunch up into a blob that can effectively mask your hook.

There are a number of ways of turning a freely sliding keeper into one that can slide to adjust for bait size but still stop your bait from bunching up, and this will be the subject of a future issue.

As suggested by the editor in an earlier article in this series, I like to slice a whole pilchard in half. I make the cut from about 3cm behind the head and slice down on a 45 degree angle to finish around the gut area. This way, whatever part you use there will be plenty of juices leaking, and internal bits sticking, out of the bait. Yum!

The end hook is rolled through the top of the bait and bound as per the image to ensure the hook remains vertical. Note that the eye of that hook is lying on the top of the bait. The other hook is then placed horizontally near the tail end and also bound. A light binding of the body section completes the bait and makes it ready for casting. 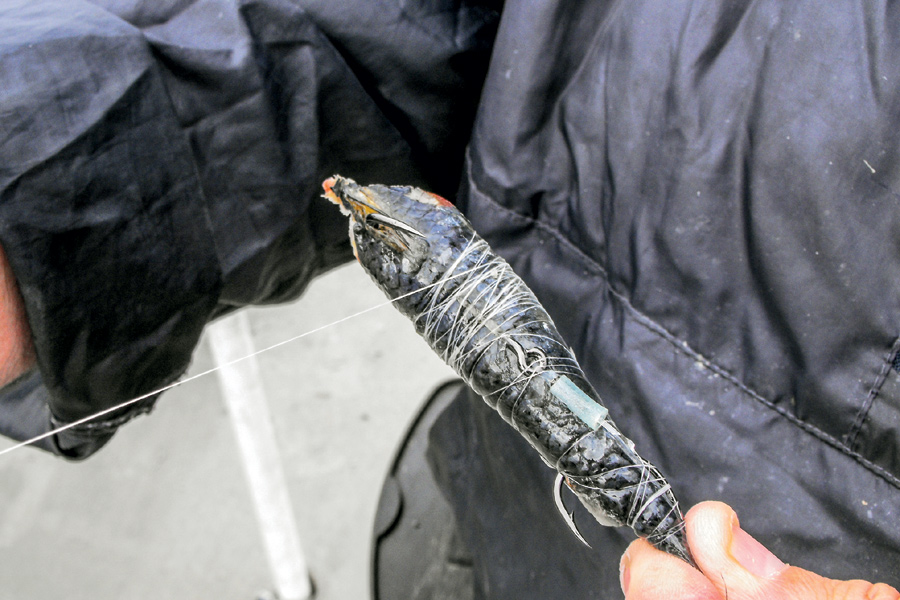 The half pilchard. A light binding of the body section completes the bait ready for casting.

Many surfcasters use skipjack as strip baits but in doing so miss out on one of the best chunk baits available. Baits of this style are often avoided because skippy is soft but it really does work well. And, believe it or not, only minimal binding will keep it on the hook.

The skipjack bait shown is one Rob Parker tied up and used during the 2019 Snapper Bonanza. Like Rob, I like to keep the hook well clear of the bait. After all, even if the fish do spot it, they don’t have a clue what it is so why should they be wary of it?

Placed like this, the hook has a much better chance of hooking into the mouth regardless of which style of hook you use. I’ve caught plenty of fish on all sorts of baits with well-exposed hooks and, of course, who could doubt Rob’s catch rate? 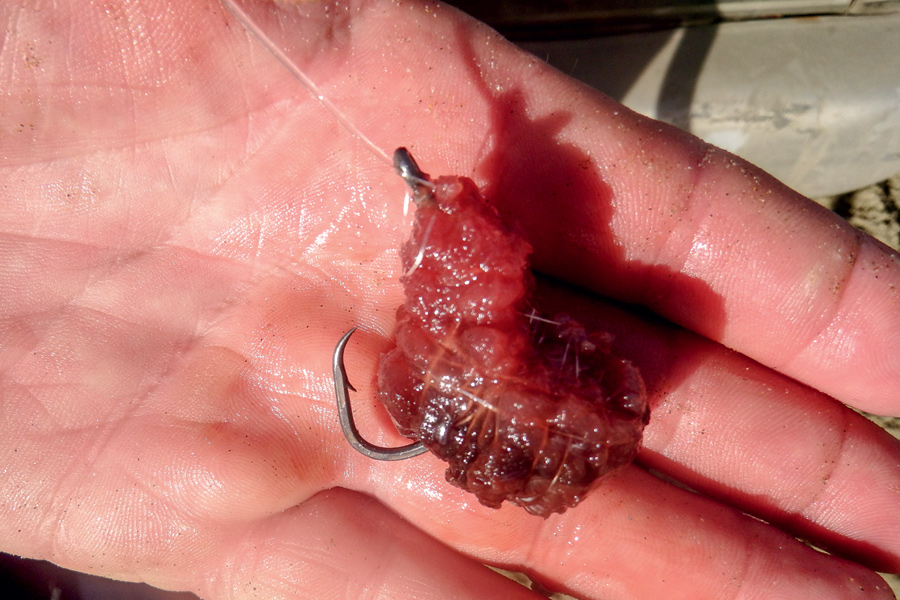 Skipjack chunk bait. This is the way Rob Parker likes to present his tuna.

All sorts of shellfish baits can be tied on the hook in much the same manner. While I’ve shown tuatuas in the image below, mussel, pipi, limpet and even crustaceans like crayfish and crab are bound in similar fashion. These are all ultra-soft so I use bait elastic which tends to cut into the bait a little less than cotton.

Getting these baits onto the hook or hooks is the hardest part. Sometimes you’ll have to chase the shellfish around the hook a bit but eventually you’ll get it to bind. Putting the hook through any firmer parts, such as the tongue, makes things a bit easier.

Once again, nothing is achieved by over binding. Leaving bits and pieces sticking out makes a much more attractive bait in my opinion. I like to bind on a few past the hook eye to make a longer bait too!

With longer shellfish baits I wait until the binding is finished before I insert a keeper hook – at right angles of course. I then bind tightly over the shank of the hook and trace to stop the keeper hook sliding and allowing the bait to bunch up. 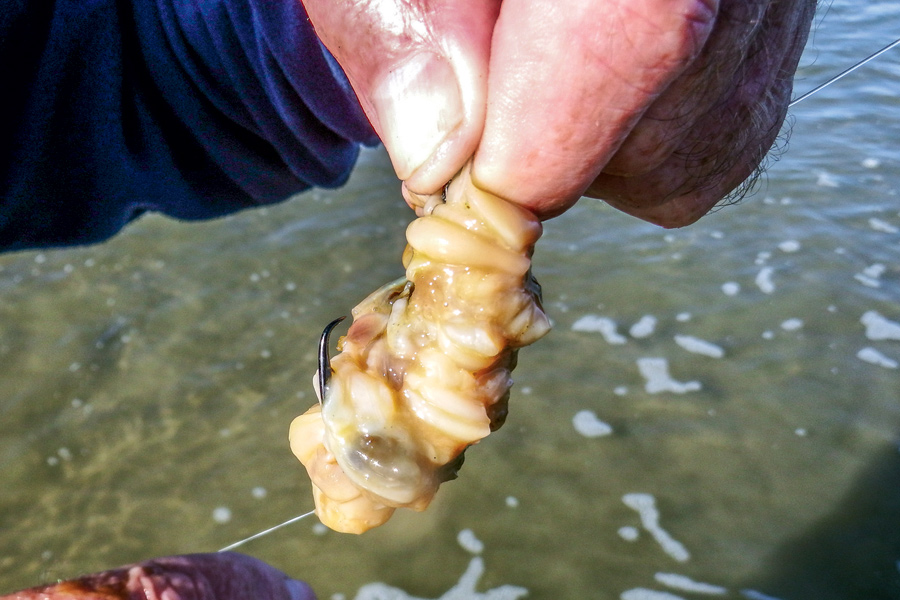 Octopus is by far the toughest natural bait. As such, there are many ways to get it effectively on either single or double hooks. The easiest way was employed by the NZ Fishing News surfcasting team at East Beach last year.

The bite was that hot – a fish every cast – that we had little time to properly rebait between fish. All we did was cut 40mm pieces of occy leg and pass the bare hook through the leg about 10mm from one end, and then cast it out. It certainly did the trick. We started fishing at 7am and by 9am we had 19 snapper in the bin.

A little more sophisticated occy bait can be seen in the photo below. This bait is about 50 to 60mm long and you can see the hooks are just placed through close to the skin. Even the hook eyes are exposed in this photo, and the bait elastic is bound tightly around the trace and end piece of the occy leg. Even though occy is a tough bait, a little light binding keeps the hooks well exposed. Of particular interest with this presentation are the bright red attractor beads just above the bait. Believe me, they do work!

The third octopus leg bait is one that I’ve been using for many a year. It appeared in one of my surfcasting bait articles quite a few years ago. Unfortunately, it’s a little hard to show the specifics of its makeup with a photo but a diagram does the trick well.

First, cut a piece of occy leg about 80 to 90mm long. A piece about 10mm thick is ideal as occy leg swells up a bit in the water. Starting off with a piece too thick means it could swell and mask the hook, resulting in missed strikes.

Just like rigging soft-plastic tails, lay the hook alongside the piece of leg. Place the eye of the hook about 10mm from one end. Note where the hook bend should exit the leg once rigged.

Now push the hook into the end of the leg and force the piece around the bend and along the shank. Exit the hook point where you noted. You will also need to force the leg over the hook eye until it’s buried inside. If you’ve done it right, the eye should be about 10mm inside the bait and it should hang nice and straight.

Now bind tightly either side of where the eye is. This stops the bait moving up or down the hook/line during the cast. Cut some little “tentacles” into the bait as per the diagram. These will waft around in any current causing eye-attracting movement. You should now be able to see what this bait imitates. Octopus leg. Even though occy is a tough bait, a little light binding keeps the hooks well exposed.

In part 2 I’ll show you a bit more bondage and a really different way to present a squid bait!