How to Use Topwater Lures

Mark Kitteridge has been taking frequent breaks from his beloved soft-baiting to take on bigger, harder-fighting quarry with various types of surface lures, and has learned plenty in the process…

I’ve been doing lots of surface-lure fishing targeting kingfish in recent times, and it’s been an absolute blast!

Yes, I do admit that initially there was a bit of anxiety as to whether the tired old body could still endure hours of casting interspersed with some tough, uncompromising battles, but I’m happy to say, no worries mate!

Fortunately for me, this resurgence of interest has been shared by two of my regular fishing companions, Josh Darby and John Eichelsheim, albeit in two rather different scenarios.

When accompanied by Josh, a fit young fireman, we go to places such as Horn Rock, Kawau Island, Little Barrier and Flat Rock, and use 37kg gear armed with large poppers and stickbaits. We mostly target obvious structural attractions and schools of large surface-feeding baitfish such as kahawai, mackerel and trevally. The fish we catch can be very big – up to 30kg or so.

Then there’s John, who’s of similar age and fitness to me. We usually go local – typically around Auckland’s Rangitoto and Motutapu Islands – and use lighter outfits of 10-15kg breaking strain during the ‘anchovy season’, which occurs sporadically from late November to May. The kings are smaller – 15kg is considered big – but our light tackle and often-clean ground below make for great fun.

While the two approaches are physically quite different, there are some common elements, too. For example, in both cases we usually start by targeting specific structures – both natural and man-made – such as reefs and headlands with good tidal flow pushing up onto them, or navigational buoys and posts in channels where there is current present. But if these prove unproductive, we head off looking for other potential opportunities. The most obvious indicators tend to be surface-splashing fish and/or feeding birds. Although a great whirling cloud of the latter is an obvious sign for possible kingfish presence, just two or three circling, wheeling or diving seabirds can be enough, too. 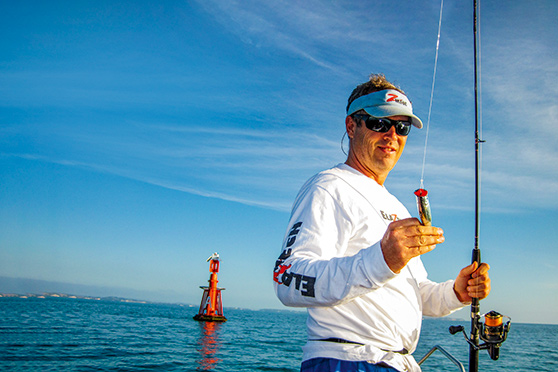 The navigation buoys and posts are always worth half a dozen casts.

Then we evaluate the situation. If the activity is very localised and/or relatively stationary, we’ll slow the boat right down to be as quiet as possible, before switching the motor off so we glide into position ahead of the work-up. We then cast surface lures – often a mix of stick-baits and poppers – to the sides of the feeding activity to avoid unnecessarily hooking or entangling sea birds. We find splashy, noisy poppers attract nearby kingfish more effectively than stickbaits and can also be exactly what they want to eat, but a lot of the time they prefer to eat stickbaits.

On other occasions the feeding activity can be spread out and/or is fast moving. When this happens, we frequently opt for trolling tactics instead, using our casting gear (mainly to reduce the number of outfits we carry on our small boats) to tow our casting lures.

We set these lures in staggered positions to avoid tangling one another (e.g. 30 and 50 metres), and typically troll quite slowly – just three or four knots. It is possible to simply leave the rods in rod holders on opposite sides while the lures do their skittering, splashy thing, but be sure to ease your reel drag off or the rod may snap upon hooking up, especially if the rod blank is unprotected and resting against the metal rod holder’s lip.

However, I far prefer to hold my rod and work the lure, whatever that might look like, as the slower trolling speed allows firm pulsing actions to be made, which entice many more kingfish strikes. Manually holding the outfit also enables the rod tip to be dropped and angled well outwards, helping ensure the two lures remain well apart and enabling them to be manipulated more effectively by the anglers. Better still, flying birds are less likely to get tangled in your line.

Eventually the kings will show themselves if they’re in the vicinity: it might be in the form of swirls or foaming splashes, which may or may not hook up. At this point, if not already hooked to a kingfish, I’ll wind in and start casting my stick-bait or popper. The kings can move fast and erratically when chasing baitfish, so consider ‘clock casting’: start at the most likely angles, then cast at various degrees all around the boat, just in case.

If you’re lucky and find the kings have congregated in a concentrated area, you could be in for some spectacular surface-lure fishing. In recent times I’ve enjoyed phenomenal experiences in areas as diverse as Waiheke Island, Motutapu and Little Barrier, with the latter involving multiple heart-stopping strikes from monster kings to 30kg plus, the big fish occasionally bursting right out and cartwheeling in their enthusiasm to take our lures!

When casting surface lures, the kings may show a decided preference for a certain size or type of lure, so it pays to experiment, ideally with lures that have proven effective before. Colour can be a factor too, especially when using stickbaits, but the way you work the lure with your rod and reel is much more important.

For me, this means keeping my rod tip lowered in almost all situations and then concentrating on how best to move the selected lure during the retrieve.

With poppers, a sharper jab forwards with the rod tends to see more water displaced and a louder noise produced. This can be important in attracting kingfish to investigate and, perhaps, strike, but the length of time between watery bloops can be key, too. Sometimes kings like a fast retrieve with little to no pauses between rod jabs; at other times it pays to go much more slowly, creating big bloops then winding in the slack line produced while waiting for the watery disturbance to die away, before making another good bloop several seconds later. 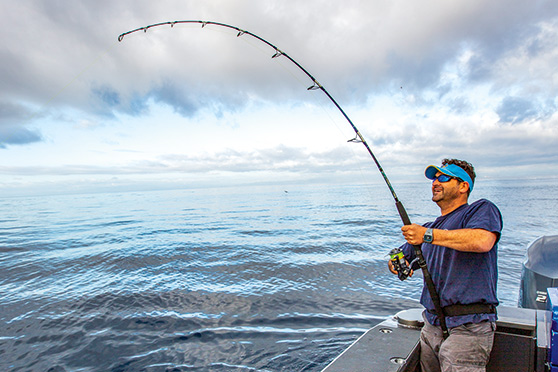 If the fish are swirling and crashing but not biting, try shorter, faster rod sweeps - or stopping completely for several seconds.

Sometimes the kingfish prefer to eat stickbaits. I mostly use floating models so I can see how they’re moving – both above and below the water – and I love the explosive surface strikes that can occur when using them.

The stickbait’s size (generally based on a ‘match the hatch’ scenario) and action (a combination of the lure’s design and the angler’s manipulations) tend to be the critical factors. The lures I use locally are often, but not always, smaller than those selected in more distant locations. Having said that, a six-kilo kingfish may take a 230mm lure and a 20kg fish could smash a 160mm (or much smaller!) lure.

It definitely helps to have a lure that moves attractively naturally, but experienced topwater fishers can use their skills to get impressive performances from lures that other anglers fail to successfully utilise. Much of what does or doesn’t eventuate comes down to the speed and length of your rod sweeps, and the length of pauses in between. So, experiment with these aspects to see what makes the lure perform nicely in the water – but in all cases make sure they have enough movement and slack line to bob back to the surface before the next rod sweep is made, as the kings mostly strike at this time.

Finally, whatever strategy you decide to use with surface lures, stick at it for a while as kingfish won’t always be present or hungry, but they are always worth making an effort for.