How to set up Downriggers 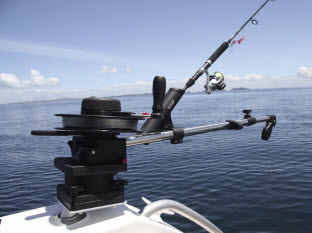 Over the centuries anglers have come up with a number of ways to deploy baits, getting them out or down to where the fish are.

Downriggers have been part of the saltwater angler’s arsenal for a long time, but only relatively recently have trout fishers in this country been allowed to use them too, thanks to changes in the freshwater rules. Their widespread use has had a remarkable affect on how we target trout and the tackle that’s used.

At certain times of the year, and even on any given day, trout will be found at various depths. In the past this has resulted in the deployment of copious lengths of lead and wire line to reach them, especially in the height of summer. Such lines are a means to an end, but can hardly be described as ‘sporting tackle’.

The use of downriggers has changed all that, enabling trollers to compete somewhat with jig fishers, using light, more sporting tackle and getting their lures into the hit zone more effectively.

While it might not be for the purists among the freshwater angling fraternity, it certainly works for me – and judging by the number of downriggers sprouting from the gunwales of lake boats, for plenty of other anglers, too.

While downrigging is not suitable for all waters, when it is, I now need only one rod and reel to cover the usual harling, lead-lining and deep-water trolling scenarios, as the downrigger sets the depth range, not the different tackle’s capabilities.

You can also fish two or three lines off the one downrigger. I tend to stack just two release clips off each ‘rigger, enabling me to fish four lines from two ‘riggers – one off the ball and a second several metres above it via a clip on the mainline. The bottom line is run longer, with the top line shorter on each side.

When it comes to saltwater fishing, options for using downriggers are extensive. The obvious one is for trolling; whether slow-trolling a jack mackerel live bait around and over structure for kingfish, or a skipjack or koheru for a marlin, a downrigger allows you to put the bait down to where the fish are. Downriggers are also ideal for towing lures such as bibbed or bibless minnows, getting them into clear water where they can be seen more easily.

Over the years some of the best dogtooth tuna I have seen caught were on flying fish dead baits trolled past drop-offs. Downriggers add the third dimension – depth – to your lure or bait spread, and can prove very attractive to your quarry.

That’s why downriggers are used by many of the top game boats targeting broadbill, as nothing else allows the baits to be as accurately and effectively presented so far down when slow trolling likely territory.

But other, more down-to-earth applications are possible, too. For example, the berley sack can be deployed off the downrigger when snapper fishing, allowing it to be lowered and positioned at the most effective depth. Also, I have heard (but not tried it myself) of downriggers being used to fish strong current situations, such as in harbour entrances. The line is clipped off to create a long trace several metres long, allowing the bait to move around in the current. Then, when a fish strikes, it pulls the line free of the clip, and if not hooked up already, can then turn and swallow the bait before coming up tight against the reel’s strike-drag. Re-curve type hooks would be perfect for this scenario.

There are several good brands of downrigger available in New Zealand. Currently we have two Scotty downriggers for the NZ Fishing News project boats – a manual and an electric one. Extreme Boats made us up a couple of bases that allow us to transfer the ‘riggers from boat to boat, and even to other craft. These have a gimbal on the bottom of the shaft that fits into the rear rod-holders.

The two different types have their good and bad points. The manual ‘riggers are more transferable, as there is no need for any power connection, but as the name suggests, they need to be physically deployed, especially when raising the ball.

Electrically operated ‘riggers require a power source, but this is easily sorted by simply adding ‘alligator’ clips to the power cable and attaching them to the battery.

The advantage of electric downriggers is that when there’s a strike, the ball can be raised at the flip of a switch, automatically stopping when it reaches the surface. This means an extra pair of hands is left to retrieve lines.

Top-of-the-range downriggers will also incorporate an integrated depth sounder. These can be programmed to raise and lower the ball so it stays within a predetermined distance from the bottom while trolling. Getting the ball stuck on the bottom is not a good look; the cable has little or no stretch, so snagging can result in broken ‘riggers, or as in one scenario I am aware of, rip the base off the gunwale!

Clips are another variable and probably the most important item, especially for trout trolling. Too light a setting and you’re constantly winding the ball up and down, too heavy and you risk breaking the line or towing a small trout around until it it‘s dead.

The clips I prefer for trout fishing are the red Dubro Pro releases, which are set by adjusting a screw in the middle of them. I tie a short length (200mm) of 15kg Dacron into my trout lines (mono), enabling the release clip to be attached here. The clip won’t damage the Dacron, and the Dacron offers the clip something less slippery than monofilament to grip.

The downrigger weight also offers some interesting options. In more recent times I have gone from the standard 10lb ball to a disc. This seems to have less resistance going through the water, especially at the faster speeds used when saltwater trolling.

A third option is the Z-Wing, a planing board that’s the most efficient of all, but this device puts a much greater load on the gear at speed.

Scotty downriggers give us plenty of options and when used well can add to the success of any fishing trip. 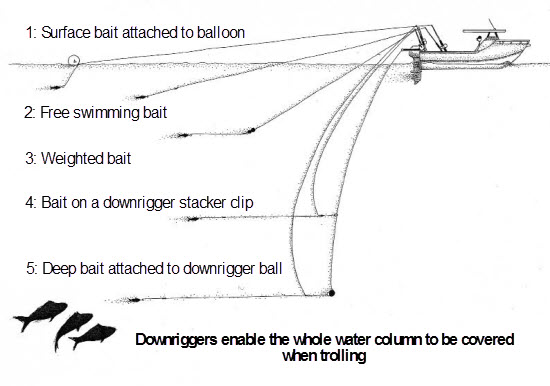