How to catch snapper using pilchards and squid

This is the first in the ‘Great Baits’ series where Editor Grant Dixon and our team of contributors look at bait options for a variety of species, and how to rig and fish them. The first looks at two of the easiest baits to prepare and deploy – pilchards and squid.

Snapper are scavengers – they will eat almost anything. And if you are a big snapper, the bigger the feed, the better you like it.

Two of the most common and readily available baits are pilchards and squid. They can be fished whole or in parts – stray-lined, ledger-rigged and even used to enhance artificial lures. The following is how I fish them from a boat situation…

My favourite way to fish whole pilchards and squid is with a double circle or recurved hook rig. Why two hooks? To give you coverage over the entire bait. My preference is for IQF (Individually Quick Frozen) bait, and if they are pilchards, make them New Zealand-sourced ones as the first choice and the bigger, the better.

But size will often be dictated by circumstance. If theHauraki Gulf’s Motuihe Channel, for instance, medium and smaller pilchards will be better than big ones. They will also give you more baits for your buck when targeting the on-average smaller snapper you might expect to encounter there.

If New Zealand pilchards are hard to find, the likes of Red Plate pilchards, available from Top Catch, are a close second place but are usually a little smaller.

There are two standard ways of rigging a whole pilchard: tail or head first. I prefer the latter as it presents the bait more naturally. In all my years of diving, I have yet to see a fish swim backwards!

The bait can then be cast back into the wash or down the berley trail. When drift-fishing, and it swims along head-first, just as a natural baitfish might.

Some anglers will use a rubber band wrapped around the trace above the sinker to prevent it moving up the trace. There are also quick-change sinkers available that have a slot and a section of rubber that holds the weight in place.

I rig up whole squid in the same way as I would ‘head-first’ pilchards, except after placing the second hook towards the head of the squid, I tie a half-hitch around the mantle with the sinker placed on top.

The double hook pillie rig where the head is uppermost, presenting the bait in a more natural position A variation on the pilchard double hook rig - this time the bait is presented tail first, the trace having been half hitched around the tail to secure it.

By cutting a pilchard (or a squid for that matter), you release the juices in the gut cavity which create their own mini-berley trail. I halve my pilchards by cutting them at a 45-degree diagonal and then rig them the same way as for whole pilchards, using a double-hook rig.

If you prefer a single-hook rig, I suggest trying this:

For a head-first approach using the head half, pass your hook through the eye cavity and then secure it into the body below, once again ensuring the hook stands proud. For a tail-first approach, embed the hook in the exposed flesh before half-hitching the trace around the tail.

These baits are popular with surfcasters, the pilchard being bound to the hook with bait elastic, helping keep it intact when casting long distances.

The other cut-bait is pilchard chunks. You will get three or four chunks from a single pilchard, depending on its size. I generally don’t use the head bit, preferring to throw it over the side as part of a berley trail.

Chunks are great when fishing with a ledger rig. Once again, my preference is to leave the hook exposed rather than buried in the bait.

When bait fishing, especially for the likes of koheru, I will fillet a partially-thawed pilchard and then dice that mini-slab into small pieces. Generally, you will have a berley bomb over the side, and the small pieces of pilchard look very much like a bit of berley. This will often work when lures alone are not cutting it.

Similarly, when using sabikis to catch jack and slimy mackerel, if the fish are there but not on the chew, a bit of pilchard (or squid) on the hooks will make a difference. Rather than drifting when the bait schools are flighty, try anchoring up in the vicinity of the schools and bring them to you with berley.

Squid, cut into chunks, is a popular bait for the likes of ledger-rigged terminal tackle such as the new Black Magic Snapper Snacks.

Thin strips of squid or their tentacles can be added to soft-baits, and inchiku or slider lures to give them a bit of added ‘flavour’. This sometimes makes the difference between fish for dinner, or not. 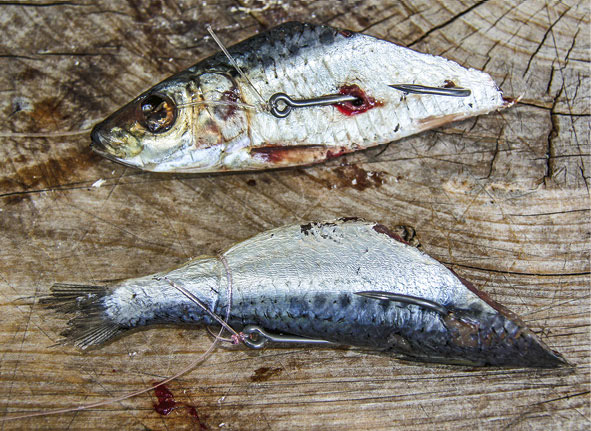 Single hook cut bait options. The pilchard is sliced on the diagonal to make it easier to secure the hook. A Black Magic Snapper Snack with a sliver of squid added. It is important to leave the hook exposed.

The trace would then be half-hitched a couple of times around the tails of the bundled pilchards, the ball sinker sitting on top of the ‘bundle’. This is a great strayline bait, especially when cast well back in the trail and allowed to slowly sink with minimal weight. Terry Beale's 'bundle bait'. Three or more pilchard are held together by wrapping the trace around them. The top hook is un-snooded, so the length can be adjusted by wrapping the line several times around the shank.

One of the Hauraki Gulf’s characters, Terry Beale, was known for his big snapper catching skills and came up with this bait.

He had another name for the pillie sandwich, but good taste prevents me from sharing it here. It was essentially a whole pilchard forced up the middle of a squid mantle after the head and tentacles had been removed.

It has proven a productive go-to bait for me over the years, both fished down a berley trail, as well as on the drift. The bait is big enough to deter the pickers long enough, so bigger fish have time to get at it. 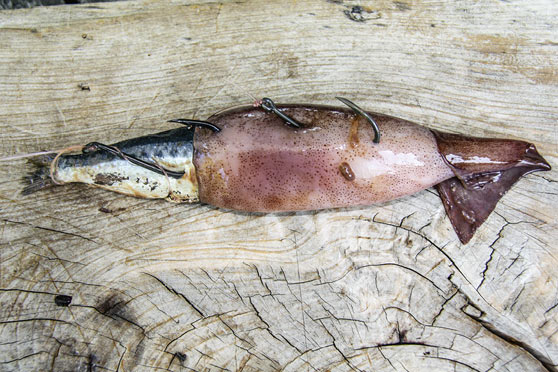 Pillie sandwhich, where a pilchard is stuffed up the mantle of a squid - the best of both worlds.

As mentioned in the January edition, I buy my bait in bulk – 5 or 10 kg boxes of IQF pilchards or squid – then break them down into smaller lots, perhaps 10 baits to a bag. I then take out only what I need, just thawing 10 baits at a time.

On days when we are mixing up baits and lures and only using modest amounts of the former, wastage is significantly reduced. In my eyes, re-frozen pilchards are of little use beyond chunking into the berley trail, so this method has helped us make the very most of our bulk bait. Don't throw away those extra pillies at the end of a trip, even if they have been baked in the sun. Freeze them and chunk them into the berley trail next time you are out.

There is no ‘bad time’ to bait fish, only some times that are better than others.

Autumn and early winter, when the fish are spread out over the deeper foul, are good times to deploy the bait and berley combination.

Bait and berley when straylining for those big snapper that are resident around our rocky coastlines is a productive technique all year round.

[INVALID] The ocean is an unsentimental place – a "fish-eat-fish" world, according to Sam Mossman. Here, he provid... more >

What Are Your Bucket-List Fish? February 2020

Experienced skipper Tony Orton provides tips for booking that trip of a lifetime. Follow his advice, and start knocking fish off your bucket... more >

Do fish remember lures? This is a question many fishermen have had when struggling to entice a bite. Ethan Neville takes a look at the scien... more > 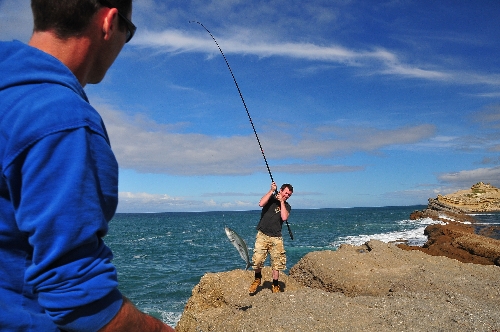