How to Catch and Cook John Dory

They aren’t the biggest or strongest species to target, but they are one of the tastiest and most captivating fish you will ever catch suggests Bay of Plenty contributor Jordy Bardin.

Commonly a bycatch when bottom fishing, john dory (Zeus faber) or kuparu are not actively targeted or talked about often. To acquire a feed of these delicious, unusual looking fish, you usually need to specifically target them which requires a little know-how. In this feature, we cover some biology, types of habitat and techniques which may help to increase your catch-rate of john dory in the future. A beautiful little john dory caught as bycatch on a micro jig while fishing out from Waihi Beach over some foul.

Unusually narrow body with a huge extendable mouth, overly long dorsal fin spines, complete with the recognisable eyespot painted on either side of their body: it is the distinctive john dory. Along with their thin frontal appearance, their olive brown, golden yellow colouration and sometimes wavy vertical stripes allow for some impressive camouflage among the weed. When searching for them while spearfishing, they can be extremely difficult to spot from above as they sit very still. The other type of camouflage they display is automimicry through the use of a large eyespot in the middle of their bodies. This basically confuses or scares away predators, giving the john dory a better chance of survival, as well as possibly confusing prey when hunting. Another special characteristic is their ability to vocalise, producing a “bark” or grunt when caught or speared. Other than a distress call, research suggests it may be a territorial behaviour as well, perhaps making other fish aware of their presence.

John dory are carnivorous and prey on a number of smaller fish species; however, with their huge mouths you’ll be surprised at the size of prey they can actually swallow! Many kinds of small baitfish, blue cod and even snapper are favoured by john dory. John dory aren’t designed for speed and are not the strongest swimmers, so they rely on stealth when they hunt. Their large protruding eyes at the front of their head provide binocular vision, which gives them an advantage. They are masters of ambush, preying on small fish by sneaking up on them before striking with their huge extendable mouth.

John dory grow rapidly within the first year of their life, reaching maturity at 3-4 years with a maximum lifespan of nine years, according to research. A john dory around 3kg is considered a large specimen in New Zealand, and anything over 4kg is reasonably rare. There is no size limit but they are part of the combined maximum daily limit of 20 finfish (a list of the associated species that are part of this limit can be found on the MPI website or the NZ Fishing Rules app).

John dory are also commercially fished around New Zealand, mainly caught as a bycatch by bottom trawlers (which target snapper or tarakihi) and in Danish seine nets.

John dory are a solitary predator that spend most of their life in the demersal zone (near the seabed). They are found in the eastern Atlantic Ocean, Mediterranean Sea and around Japan, Australia and New Zealand. Here they are more prolific around the warmer waters of the North Island but can be found around the upper South Island too. We are lucky to have a great fishery here in the Bay of Plenty region, in which they can be caught all year round. John dory are common in very shallow bays and I have great memories of chasing them around at our local beaches as a kid. They may reside in depths of up to 200m but are more commonly found in less than 50m around some form of structure. John dory will hang around reefs, foul, weed edges or even wharf pilings, basically places where baitfish tend to mingle. If you have access to a boat, find some local reefs or foul ground to try.

I suggest slowly drifting or anchoring around the edges of the structure, as they will quite often be out on the sand. Otherwise, have a look around your local wharves or shallow bays and you might spot one chasing baitfish around. 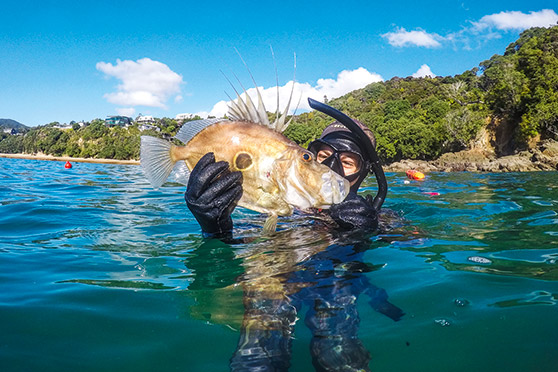 John dory can sometimes be hard to see when diving. The writer didn't see this one until she scared it, causing it to flare its fins and turn side on in defence mode.

Sometimes you can spear them like a flounder or even chase them into the shallows and catch them by hand! Although their movements seem to be fairly unpredictable throughout the year, their numbers/catch rate seem to increase as the water cools down here on the east coast. May and June were great months for me and john dory over the past few years. Fishing around reef and foul in up to 30m of water has produced a great number. On the east coast of the North Island they are known to spawn from December through to April, which may be why they seem harder to find at this time of year.

Occasionally caught while bottom fishing for the likes of snapper or tarakihi, john dory are often just considered a bycatch. They are not known to take a cut bait but if a small fish jumps on your hook, sometimes you end up winding in a john dory which has swallowed it! This is why it pays to put down a livebait while bottom fishing!

They also take a liking to lures. I have caught them on all sorts, including soft-baits, kabura-style lures and micro jigs. When soft-baiting or using a lure, match the weight to the depth and current. You want to get the lure to the bottom and drag it slowly over the area, nice and close to the seabed. It may take more time and effort using lighter lures, but it’s always more rewarding when you get one! 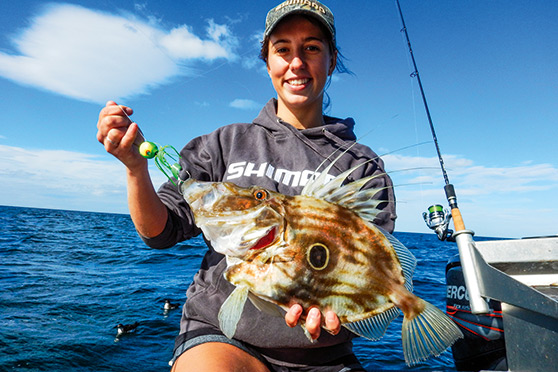 This JD was a nice surprise, caught on a kabura-style lure while fishing on the edges of a reef in 20m.

Otherwise, livebaiting is an obvious and effective way to target the predatory fish. I always like to catch some small kahawai or mackerel for the livebait tank before a day’s fishing, but you can always try catch some while you’re fishing too. Berley helps to attract baitfish wherever you decide to target them and some small hooks, lures or sabikis are essential.

For livebaits, small (10cm or less) kahawai and mackerel are john dory candy but if you use another species, please make sure it is of legal size or has no size limit at all. Once you have some livies, basically just match the hook to the size of your livebait. It will usually be fairly small when using small livebaits, such as a 5/0 or 6/0, and I always use a J hook when targeting john dory. You still want the livie to be able to swim and stay alive, whether you hook it through the nose, bridle rig it or place the hook just under the skin through the upper back. I should also note that I use a decent line-weight and rod/reel setup because a kingfish or big snapper might just come along and I want to be prepared for that possibility!

I usually use a simple trace with a running sinker above the swivel, matching the weight of the sinker to the depth and current. Whether you are anchored or slowly drifting, slowly let your livebait out and set it a few winds up off the bottom – it doesn’t need to be super close and you don’t want to get it snagged. There won’t be much of a strike or struggle once a john dory swallows it and it’s almost just a dead weight as you wind, which doesn’t sound very exciting but you should be excited because that’s a john dory on the end of your line! A nice steady wind up is sufficient and make sure to net it. And if you’re quick enough, you can pull the livebait out of the john dory’s gob and chuck it back down to catch another one! Not very nice for the poor livie but who doesn’t love a 2-for-1 deal!?

I have a theory about john dory. Quite often once you catch one, you will almost immediately catch another one and even another one after that in exactly the same spot. I think that once they are hooked and distressed, they start to “bark” and this alerts and attracts other john dory to the area. I have heard a similar theory with gurnard, which also are vocal when distressed. So it definitely pays to have another livebait or lure ready to go over the same spot as you’re likely to double your catch!

John dory are one of the best eating fish around and they are one of my absolute favourites. Despite their size and thinness, the fillet is fairly large and succulent. One of the best things about john dory is the fillet comes off clean with no bones, and there’s also no need to deskin or descale it as they have tiny, unnoticeable scales!

John dory have a delicate white meat and subtle but sweet flavour which just melts in your mouth. You can cook or bake them whole, simply pan fry the fillets with butter and a squeeze of lemon, or leave the skin on and try my delicious crispy skin john dory recipe…

Achieving that perfect crispy fish skin can be difficult sometimes but there are a few tricks that may help. Fortunately, john dory are simple to fillet and like flounder, don’t need to be descaled or skinned, so they are perfect for this recipe. • The really important first step is to dry the fillets well. You can pat them dry and leave them skin side up (uncovered) to dry out at room temp or in the fridge. Otherwise, use paper towels to dry the skin as much as possible.

• Heat a thin layer of oil (enough to cover the pan) over medium-high heat. The oil needs to be very hot (just before smoking point) before you place the fillet in the pan.

• Place one fillet skin side down in the pan and with your spatula, firmly press down on the fillet to hold it flat. Do this for 30 seconds or so, until the fillet lies flat and doesn’t curl.

• Do not move the fillet around the pan. Leave to cook for a few minutes, making sure it doesn’t burn.

• When it’s almost cooked through, flip the fillet over to finish off cooking the meat.

• Season with salt and pepper, and serve with a wedge of lemon. Try using lemon pepper if you don’t have any lemons. Enjoy! 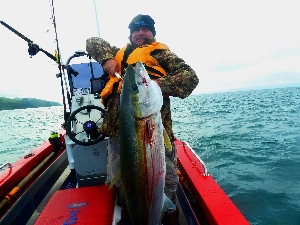