Getting the most from your catch

Many people consider freezing fish to be sacrilege, but done right, the results are pretty good.

Earlier this year, when fishing in Hawaii, we caught a nice yellowfin tuna. While taking the fillets off, the first mate Kevin Hibbard was wrapping each individual slab in paper towels before placing them in a zip-lock bag.

My initial thought was, ‘What a waste of time and paper towels!’ However, as I knew Kevin is a very experienced fisherman, and caring for and getting the best from my catch is very important to me and my family, I just had to ask the question: “Why are you doing this, Kevin?”

The reply was to change the way I care for our fish fillets. 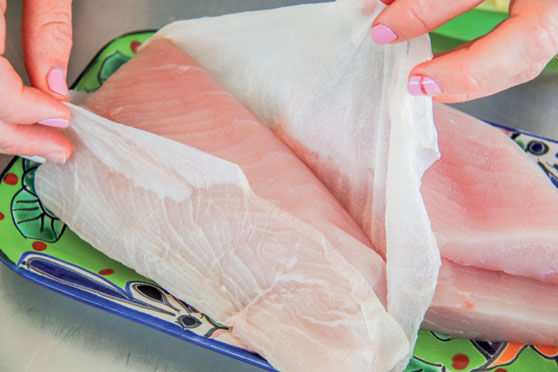 “Wrapping the slabs of fish in paper towels stops the fillets getting slimy. It draws out the excess moisture, keeps the meat tasting fresher, and extends the life in the refrigerator.”

‘Hmmm,’ I thought, ‘sounds like a good idea – I’m going to try this back in New Zealand on our snapper and kingfish.’

This happened at the beginning of my adventure in Kona, and I had a bunch of mates and clients arriving over the next eight days; I knew they would be hanging out for some yellowfin sushi, steaks and tuna cakes, so wanted to keep this fish in the best possible shape.

I remember getting back to my house that night with a massive bag of yellowfin slabs all wrapped in paper towels. First, I carefully took a nice slab, removed the paper towels, and immediately noticed how dry, shiny and fresh it looked (understandable given it was caught that day, but still looking better than if just thrown into a bag with the other fillets).

Next, I rewrapped this prized slab in clean paper towels, put it in a zip-lock bag, sucked the air out and placed it in the freezer, pending my friend’s arrival in eight days’ time. Normally, freezing a nice slab of yellowfin or bluefin tuna is a crime, but it was a case of necessity this time – and it also provided a great opportunity for worthwhile experimentation.

Over the next four days we ate yellowfin tuna every night. Each time we unwrapped a fillet, it was dry, had a fresh pearl-pink colour and never had a smelly fish odour. Impressed? Hell yes!

But the ultimate test was coming. Eight days after the fish had been caught, my good friend arrived, and it was time to put my new-found fish-keeping strategy to the test.

After pulling the tuna slab from the freezer, I thawed it out; Bea would be cooking it for him that night, and I was eager to get some feedback.

Inspecting the thawed-out slab, it did not look like as if had been frozen, and upon cutting the block of tuna in half, it still had that shiny, clean look of a fresh fillet. The feedback was excellent, and our man was very happy to be eating ‘fresh’ yellowfin tuna.

This experience prompted me to check how expensive tuna slabs were looked after in restaurants. I noticed they, too, were often wrapped in paper towels or cloth to ensure the best quality and extend their shelf life.

Earlier this year I had a group from Singapore fishing with me for a week, who were very particular about how we killed and looked after the catch.

We did not kill many fish this trip, releasing most. But the fish we took back to the lodge were all spiked in the brain, then had a steel wire inserted down the spinal cord to disrupt the nerves radiating to the body of the fish. Upon inserting the wire into the fish’s spine, you could see the effect, with the flapping fish going completely limp.

The resulting kingfish and trevally sashimi we ate on that trip was like nothing I have ever eaten before, being soft and tender, and melting in my mouth.

Ice slurry, then pack on ice

I had the pleasure of snapper fishing with NZ Fishing News’ Grant Dixon and was impressed by how well he treated his catch. Every snapper we caught that morning was iki’ed and thrown into a smaller 56-litre Icey-Tek bin containing an ice slurry – a mixture of salt ice, frozen water bottles and salt water. These fish were left in the slurry for around 30-60 minutes – enough time to drop the core body temperature very quickly – then transferred to another, bigger icebox. Here, the fish were placed horizontally, nose to tail, and sprinkled with fresh salt ice.

By the time we got in from the morning’s session, the fish were well set, making filleting easier, and the quality and taste of that snapper was as good as it gets.

Make sure your filleting area is clean so the flesh is not contaminated with old blood, guts and scales.

If the fillet gets dirty, or you want to remove stray scales, wipe it down with a paper towel. Washing the fillets in fresh water is the worst thing you can do – the meat goes a milky-grey colour and the fillet takes on excess moisture. The freshwater (and seawater, too, for that matter) is warmer than the ice the fish was on, so can heat up the meat, spoiling the taste.

For my family, it’s all about ensuring our catch is going to taste the best it possibly can. Every fish that comes on board is spiked in the brain, bled and packed on ice ASAP. We live by the rule: if you are going to kill something, then show it full respect by ensuring it tastes as good as possible.