Fishing with Braid - Some History and the Future

Ethan Neville’s entry into the fishing world was common to the point of cliché: dropping long-dead baits into a quiet harbour with an old Baitrunner spooled with 50lb mono and a ledger rig attached hastily by my dad, impatiently waiting for a bite and a quick fight and a measurement best taken in millimetres…

The aching arms caused by fishing for pannie snapper with a rod now used for medium- to-large kingfish was, I’m sure, one of the rites of passage for many Kiwi boys – not quite a bar mitzvah, but surely just as fun for both dad and son.

So, what happened to the “good” old days?

A number of things (new rods, reels, lures and techniques) played a part in the fishing revolution we have witnessed in the last ten or so years. However, there is one constant in almost all of the New Zealand recreational fishing innovations that deserve special attention: polyethylene (PE) line or, as it’s more popularly known, braid.

Braid as we know it today is formed by – you guessed it – braiding polyethylene fibres. It’s lighter, more sensitive and has less stretch than traditional monofilament lines, making it the first choice for deep-sea and lure fishers. In fact, if you walk into most garages today and take a quick survey of the fishing gear, I’m confident you will find just as many, if not more, spools of braid on average than spools of mono.

In the early nineties, a number of keen Kiwi anglers first started taking notice of PE braid. NZ Fishing News’ own Sam Mossman, and Grant Dixon both made the transition to heavier braids in this period, utilising its comparatively thin diameter and minimal stretch for deep-sea fishing. Not only could the spools be filled with more line without compromising breaking strain, the angler could stay in touch with the bait even down to 300m. At this time, Sam also recalls using heavier braids (30-80lb) when jigging for kingfish. The increased spool capacity and sensitivity made braid an obvious choice for fishing with knife jigs.

At this stage, however, braid was far from commonplace, and certainly not the choice of the everyday, inshore recreational angler. The introduction of lighter PE braids here would coincide with the soft-bait revolution of the early 2000s, led by Malcolm Dawson and co. As outlined in my article on this topic in NZ Fishing News earlier this year, this revolution was slow-burning and faced considerable resistance – and braid was not immune to this opposition. One urban myth at the time was that braid cut through guides, anchor warps and even flesh (none of which is, of course, true!). As late as 2004, Sam Mossman and John Eichelsheim were still bringing lighter braid back from Australia as it wasn’t yet available in tackle stores.

As the decade progressed, however, so did most people’s attitudes towards soft-baits and other “light-gear” fishing techniques. It wasn’t long before smaller reels, and graphite rods were a fixture in tackle shops, and with them, light PE braids. Even heavier PE braids started to be utilised more broadly, their advantages for topwater casting, game fishing and, most recently, surfcasting becoming increasingly well-known. In the last ten years, braid has formed a pivotal part of our recreational fishing scene and seems to be doing a great job of consistently finding more converts.

While it’s clear that the growth in popularity of braid has been rapid and widespread, I was more interested in precisely how widespread this transition is. I was also curious as to whether there is still reason to keep a spool of mono in the tackle box – something I haven’t done for a number of years.

Initially, my research went to plan: the trajectory of mono to braid appeared clear. When I asked Tony Orton, owner and operator of Offshore Adventures, creator of Journey of a Fisherman and one of New Zealand’s more experienced and well-known anglers, how much of his fishing involves the use of braid, his answer was simple: “Every reel I own has braid on it with the only exception being game-fishing top shots or leaders but they still have braid backing.” Braid, for Tony, has important advantages for several fishing applications. He uses, “metred braid for more accurate fishing, especially jigging and live baiting” and standard braid for “lure and soft-bait fishing for better feel and smaller diameter for better presentation.” Braid also offers “low stretch for better sensitivity in bites,” making it ideal, as mentioned above, for game and deep-sea fishing. 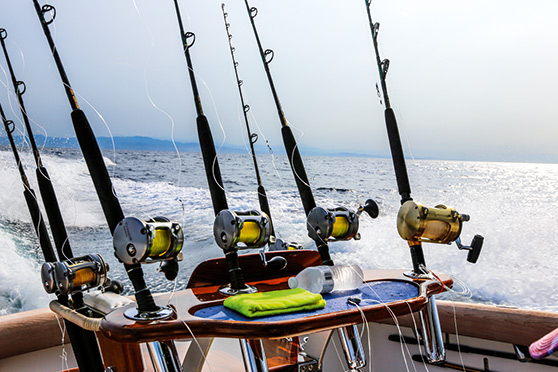 Braid has its place in gamefishing, especially when it comes to the lighter line classes, where used as a backing its much thinner diameter considerably reduces line drag and the possibility of breaking off.

Regular magazine contributor Alistair Arkell agrees on almost every count. He tells me he uses braid for all lure fishing and deepwater fishing (over 70 metres). He also notes that he uses braid for trolling live baits for kingfish as it creates less drag in the water. This is another important feature of braid, which makes it even better suited to deep-sea fishing and, as will be discussed, certain types of freshwater fishing.

The exception for both Tony and Alistair is strayline fishing. Monofilament has certain advantages that make it the first choice for those casting baits into a berley trail, particularly when using circle hooks. The extra stretch of the mono allows circle hooks to more easily roll into the corner of the fish’s mouth. For John, the way mono sinks also does a better job of presenting the bait.

These qualities also make mono best suited for a number of fly-fishing applications; however, as mentioned, braid has been incorporated into some methods of freshwater fishing. Just as with saltwater fishing, braid enables freshwater anglers to better stay in touch with their terminal tackle. This is particularly helpful when jigging for trout, which involves using flies on a ledger type rig. As it creates less drag through the water, braid also has advantages when downrigging for trout. At the very least, braid improves the quality of the fight when fishing in deeper waters as it allows the angler to feel the fish fighting the whole way up.

With my own (and many others in my circles) line use being consistent with the above – particularly the saltwater applications – I thought this was a done deal: braid is the future of fishing, and anyone using mono for anything apart from straylining needs to rethink their approach. This, however, was before I visited my local tackle store and asked about their sales.

It, apparently, is still 50/50. For every reel they spool with braid, they spool another with mono.

Confused, I travelled further south – closer to Auckland Central – to visit another tackle store I frequent. The operator confirmed my hypothesis that braid is currently far outselling mono – braid, in fact, now holds 85% of the market share in this shop. Not knowing what to make of this disparity, I kept digging.

Thankfully, Ben Francis, another experienced angler and NZ Fishing News contributor, was able to give me some insight into what is going on here.

For Ben, it has been a strange journey from mono to braid and now – to my surprise – mostly back to mono. He still uses braid for deepwater fishing and gamefishing for the increased sensitivity and spool capacity (again top shotting mono when gamefishing to “take the shock/impact”). For lure fishing, including jigging, braid also remains the go-to. However, about snapper fishing, which for most New Zealand inshore recreational fishermen remains the most common form of fishing, Ben tells me, “I almost exclusively use mono for a number of reasons.” 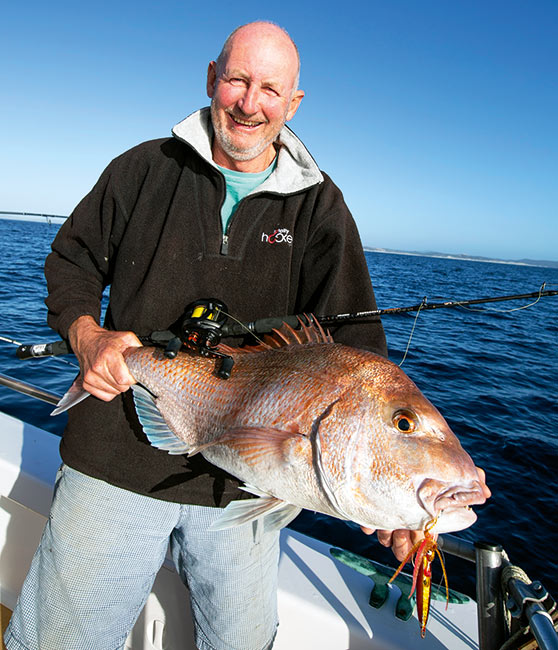 The finer diameter braid has put the sport back into inshore fishing, especially when it comes to targeting the likes of snapper on lures.

What makes Ben different from the other anglers I spoke to is that he almost exclusively fishes on the west coast.

“When fishing deep water over the bar on the west coast (usually 40-80m),” he says, “I have quite a bit of gear loss due to inexperienced anglers and tangles with the sharks and kahawai that are plentiful.”

When fishing with braid, untangling these messes is an untenable proposition, but with mono, there’s always a chance of saving the spool – and if worse comes to worst, replacing a spool of mono is inexpensive.

“I think that when fish are tentative, the mono stretch is more forgiving and helps by dulling what the fish can feel. If we can feel more, the fish can feel more sort of thing.” Another reason for Ben favouring mono is the frustration of losing good fish when braid becomes connected with another line under load. With mono, there is a higher chance of the fish being landed when lines become crossed, but with braid involved, one of the lines, in his experience, will most likely snap.

While not ideal for lure fishing, it appears there remain quite a few advantages of mono when using bait. Considering how many recreational anglers exclusively target snapper, and often with bait, the fact my local store still sells 50% mono now makes far more sense.

So what’s next? With braid technology only becoming more refined – particularly when it comes to specialist uses such as increased casting distance – it seems braid is going to hold onto its place in the market, if not continue to grow in popularity. If you haven’t given braid a go yet, it might be time you tried spooling one of your reels with one of the many types of PE braid now available and experience its well-documented advantages for yourself. However, I’m not so convinced mono will completely disappear anytime soon. With the conversations I’ve had recently, it seems clear that certain qualities of mono will ensure it has a few important applications in the future of inshore recreational angling. 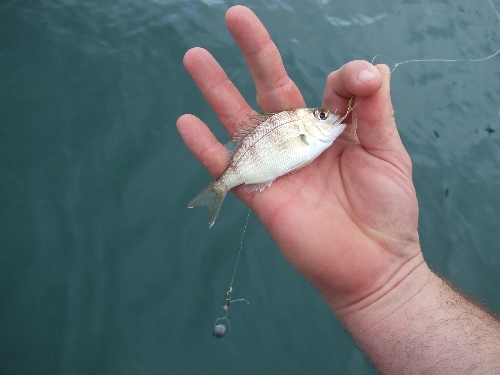