Catch and release - how to handle fish before release

The term noblesse oblige, roughly translated, means ‘with privilege comes responsibility’. Applied to fishing, this concept can be interpreted: if we have the privilege of harvesting fish, we have an obligation to look after them, too. Although it is questionable that many of those who see fish as a product and fishing as just a way to fatten their pockets have this principle at heart, I believe that more and more recreational anglers are accepting this precept.

Along with hook type and size (see last month’s feature), an important aspect of how anglers may help reduce mortality of released snapper – and other fish – is in the way they handle them prior to release. The slime or mucus coating on the skin of a fish is its primary defence against infections. Avoiding damaging this mucus covering goes a long way to increasing the survival rate of returned fish.

Here, ‘best practice’ is less clear, but it is advisable to take a conservative approach. As an absolute minimum, wet your hands before touching fish and avoid putting fish on dry surfaces. Many consider that a wet rag, towel or cotton glove is a better way of holding fish for unhooking. Along with reducing damage to the fishes’ mucus covering, this gives a good grip (helping to avoid dropping the fish) and also protects the handler from being cut by sharp scales, spines and gill plates.

However, you might think that fabric such as towelling would be more likely to damage the mucus coating that protects fish from bacterial infection than would human hands. Indeed, researchers involved in NIWA fish tagging programmes use rubber dishwashing gloves when handling fish, considering that this does less damage to the mucus than fabric such as towelling does.

This raises another issue – the effect of landing nets on the protective mucus covering of fish. Traditionally, landing nets have been made of wide meshed, harsh fibres such as polypropylene, which can damage the slime, fins, gills and eyes of fish. To this end various ‘fish-friendly’ nets with mesh made from rubber-type substances are becoming popular. Besides being easier on the fish, they minimise tangling of terminal tackle in the mesh, reducing angler frustration as well.

Efficient handling is all about getting fish back into the water quickly, which is an important part of preventing returned fish mortality. The longer a fish is out of the water, the lower its chances of survival. Get them back in as quickly as you can.
Avoiding dropping fish on the deck is important too, and having a good (but not damaging) hold on a fish is a way of ensuring this. Apart from that, the usual stuff applies: keep fingers out of the gills and away from the eyes, don’t squeeze the gut area, and don’t hold larger fish up by the tail or head without supporting the mid-section.

If the hook is swallowed and cannot be easily reached for unhooking, the fish has a better chance of surviving if you just cut the line as short as you can, rather than mucking around in there. But remember, a high percentage of deep-hooked fish do not survive, so if it is a legal-sized fish, keep it for the table.

Not all fish can be successfully returned, particularly bottom fish pulled from deeper water. If brought up quickly, the change in pressure will cause many bottom fish to embolise (become ‘blown’) as gas in the swim bladder, blood stream and body expands. Such fish, if released, often cannot get back below the surface, so drift helplessly away to become prey to seabirds or other predators.

Sometimes there may be a problem with blown snapper, even in moderate depths. A lot of this has to do with the speed at which they are pulled to the surface. Small specimens (which cannot offer much resistance to heavier tackle) are particularly at risk, and such fish (especially now that the minimum size has been increased) may be legally undersized and need to be released.

I could find no New Zealand research on the survival of released fish that had been embolised, but American studies, in general, have local application. One finding is that ruptured swim bladders can heal in a matter of several days – if the fish can get back down to the bottom and avoid predators. A second is that the deeper the water the fish was pulled from, the lower its chance of survival. Generally, about 90% of the US fish were surviving when caught and released in water around 20m deep, but only about half were surviving capture and release in about 50m – and the figures got even worse in deeper water. This general trend from several different studies is significant and logical.

Bread-and-butter snapper fishing is often done in 30m to 50m of water, and sometimes there are a lot of smaller snapper on these spots. These small fish, when pulled to the surface, will often be embolised, even in such modest depths. In this situation, if an embolised snapper is legal-sized, keep it to eat. Fish pulled from very deep water are unlikely to survive, even if remedial measures are taken.

One approach to allow the fish to get back under the surface is to use the hook tip to put a tiny hole in the membrane (actually the stomach wall) protruding from the mouth, pushed there by the expanded swim bladder). This allows the expanded gas to escape, and as the membrane shrinks to its normal size, the hole also shrinks and (hopefully) seals up. Considering the sharp and hard items (such as crunched-up kina, crabs, shellfish) many fish eat, it is a reasonable assumption that their stomachs are robust and heal well.

There is some debate, though (but not much evidence either way), as to whether this is a good technique or not. Certainly, the fish become lively again and can get back under the surface where they can recompress. Just what the long-term survival rate is, I do not know.
Another method is the use of reasonably large-bore venting needles (designed for farm animals and available from veterinary suppliers) when necessary to help ease the gas pressure from the swim bladder (or if this has ruptured, the belly cavity) of the fish. However, the most recent US research has thrown considerable doubt about venting’s effectiveness in reducing mortality and it is no longer recommended in US fisheries.

Over the last few years I have been trying a different system on small snapper caught in 30-plus metres. I get the fish up to where I can identify it – say two metres or so under the surface. If it is a ‘throwback’, I let it sit down there for 30 seconds or so. Most of the time there is a burp or a fart, and a string of rising bubbles to signify that the fish has managed to clear at least some of the excess gas. Fish that have been sluggish suddenly become much more active after this easing of pressure. They can then be lifted in and released. This has been pretty successful – at least in allowing the fish to get back down. Again, I have no way of knowing the survival rate.

There seems to be a big change in pressure on the fish as it is removed from just under the water into the air. The sub-surface pause before lifting the fish out of the water makes a lot of difference and often appears to allow the fish to recover enough to get under the surface when released, where increasing water pressure further helps to recompress any residual gas as they swim down.

There are also devices used to get a helpless fish back down to where it can recompress then release it. The West Australian-designed ‘Survivor Reviver’ can be quickly clipped to any tackle with a snap. The barbless hook is passed lightly through the lip of the affected fish with the hook point down. The weight pulls the fish back to the bottom, while the line is free-spooled from the reel. When the fish gets back down, it can struggle free, or a good pull on the rod will slip the hook out. For more on this method, go to Youtube and search ‘Fish release weight barotrauma’.

So what does this mean for bottom fishing in deep water?
Anglers must be prepared to keep and use what they catch. As they can seldom be successfully released, the little ones count and should be kept as part of the bag.

Target the desired fish – the use of big baits and big hooks or lures will help avoid hooking too many small fish.

When the required number of fish have been caught, anglers should stop fishing or target other species. For example, go trolling, or target a big kingfish with jig or live bait, or whatever. Catch-and-release fishing for bottom species has no place in deep water.

The fish most likely to survive embolism when released are those caught from the more modest depths of 30-70m. Here, the mitigation techniques already described will have the most effect.

If you are catching too many undersized fish, move to another area. 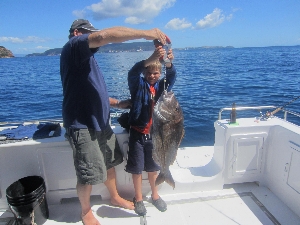