In human terms, berley is to fish what that lovely smell wafting out of the bakery is to humans – just follow it with your nose and a nice treat awaits. Grant Dixon looks at some berley basics with snapper in mind…

The pulling power of berley or chum is well documented and appreciated by anglers. Anglers into straylining for snapper wouldn’t leave the ramp without it and the same applies to landbased fishers – it is an essential part of their kit and it sounds the dinner gong for their target species.

In my experience, the more berley the better and if you are landbasing, take as much as you are prepared to lug in. For this article we will concentrate on boat fishing where the amount of berley is only limited to how much suitable storage you have on board. 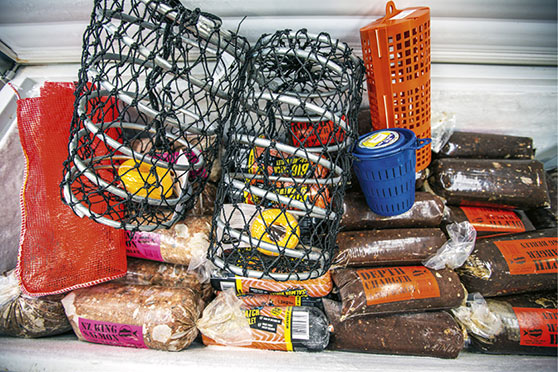 Go to any bait store worth its pilchards and you will find in its freezers a selection of berley ‘bombs’ – round plastic bags filled with the good stuff – in a number of size options. Over the years I have come across all sorts of concoctions sold as berley – everything from cans of dog food, chook and pig pellets through to minced up koi carp.

The best berley is one that contains as much natural product as possible – skipjack tuna, mussel, salmon, mullet guts and paua – all ground up finely with tuna oil added. To say a berley has ‘fish oil’ added is not good enough; it needs to be tuna oil to get the best results. I recall using a berley containing koi carp oil and spending the session watching fish carefully avoid it in favour of a more conventional brew running off the other corner of the transom.

Oil is a key factor – it gives your berley ‘reach’, spreading far and wide and bringing your target species to where the slightly bigger pieces of berley are found and, ultimately, your bait. Salmon berley in particular creates the slick from hell.

Berley can be dispensed many ways. This can be done by simply putting it in an onion, or similar fine-meshed bag, and hanging it off the gunwale; or by using the more sophisticated ‘wobbly’ pots and cages that can be lowered to various depths. Downriggers are a useful tool for deploying berley.

In Rarotonga I have fished with the locals targeting yellowfin tuna around the FADS. They wrap fish scraps – mostly skipjack – in leaves, tie them lightly together and drop them over the side attached to their lines adjacent to the baited hook. When they get their terminal tackle to the depth they want, a sharp pull on the line releases the leaves and spreads the berley in the vicinity of the baits. I have seen something similar done by Kiwi anglers targeting tarakihi over a reef, but using a paper ‘lolly’ bag instead of leaves.

How deep you set your berley dispenser depends primarily on two things – the depth of the bottom you are fishing over and the strength of the tidal flow, and sometimes even the wind.

This shows the perfect placement of the berley pot where the wind and tide are in alignment.

Berley is your call to action – it promises good things to your target species whose main focus – outside of the spawning season – is getting a good, easy meal. With that in mind, you need to have your berley flowing through an area you can get your baits to. No point in setting up a berley trail that you can’t fish your baits down. This happens when the wind and tide don’t align.

If you are fishing back to a reef face, set your berley at a depth where it will spread up and over the top of it, creating coverage in as wide an area as possible.

When fishing back to a reef structure, set your berley pot to maximise coverage.

The stronger the current flow, the deeper I set the berley. Some people like to tie their berley to the top of their anchor chain. This has the advantage of getting the berley down deeper and the movement of the boat pulling against the ground tackle helps dispense the berley. The one disadvantage of this approach occurs when the wind and tide are not in the same direction, as your berley will dispense away from where your baits will be. 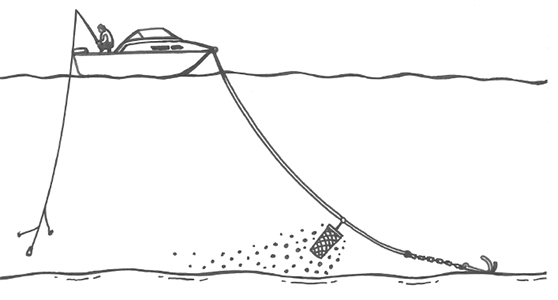 One option is to tie your berley pot off the anchor warp.

The berley rope can create a hazard when set off the transom. Try tying it off further forward – on the bow rail or cleat for example – where it will be out of the way once you start catching fish. Just remember it is there when you eventually leave! 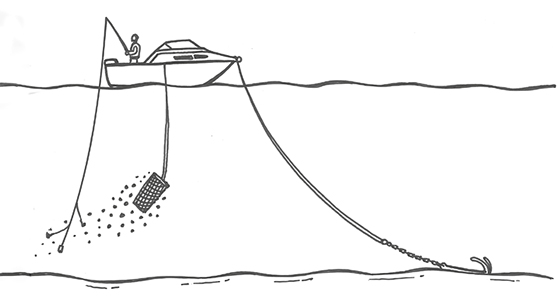 When fishing close to the stern of the boat, it is a good idea to tie the berley off further forward.

The flow rate of your berley will depend on current, water temperature and the method of dispersal.

In summer, where the water temperature is in the early 20 Degrees C for an extended period, frozen berley is going to ‘melt’ quicker. In winter, with water temperate in the low teens, it is not going to defrost anywhere as fast. In winter one berley bomb might last 3-4 hours but that time will be halved at the height of summer.

My preferred method of berleying is to strip the plastic from around the bomb which is then placed inside an onion sack. This is then put into a wobbly pot and lowered to the desired depth and given a good shake every ten minutes or so to create a larger ‘cloud’ of berley.

Alternatively, you can forget the sack and put the berley bomb straight into the pot. To regulate the berley flow, cut strips out of the plastic rather than remove it completely.

I don’t recommend putting the bomb in the sack with just a weight to get it down. This makes it vulnerable to the sharp teeth of your target species, not to mention the unwanted attention of ‘couta and sharks.

I know of several anglers who in autumn go on skipjack tuna targeting missions to gather their bait supply for winter snapper fishing.

As well as taking off the fillets which they salt down and freeze, they use the guts, heads and frames to create their own berley by putting it all through a heavy-duty mincer. Mixed with a carrying agent such as pig pellets and perhaps with a little tuna oil added to the concoction, this is put into one-litre plastic ice cream containers or milk bottles.

I recall one memorable episode of the ITM Fishing Show where host Matt Watson and his ‘mad mate’ Pete Jackson had a wood chipper on board into which they fed skipjack tuna to create the berley trail from hell. It’s a practice I don’t recommend as there would have been a massive clean-up involved, but the theory was good!

Chumming up is another option. Keep all the leftover bait from previous missions and freeze it. Bring it along on the next trip and after it has thawed, chop it up and at regular intervals thrown handfuls over the side. It adds a little substance to the trail and it is not a bad idea to send a loaded chunk down with it.

Many boats have a berley dispenser attached to the swim platform or transom. Scraps of bait can be put in this and munched up with a plunger to create an attractive berley trail. This works particularly well around the mussel farms where the fish are used to the noise of the harvesters, but in shallower water, where stealth is part of the game plan, it might not be such a good idea.

The Picton Marina Boat Ramp – one of the gateways to the Malborough Sounds – is reviewed.... more >

Planning well is an essential part of fishing. Gary Kemsley takes us through his planning prcoess, considering wind, water clarity and rigs,... more >

Caring for your Catch and Filleting Snapper April 2020

Mark Kitteridge discusses how to best care for and process your catch, and provides a step by step guide on how to fillet snapper.... more > A good day off the Wairarapa south coast - Wairapa