In the relationship between predator and prey, evolution has ensured that prey is always a jump ahead of its pursuers. This predatory disadvantage guarantees the survival of both.

There are innumerable adaptations with which prey animals have managed to keep ahead. Predators know that and concentrate their efforts on the young, the old and the sick or wounded, along with prey animals that make mistakes or behave out of norm. The almost certain removal of such behavioural misfits ensures that their defective genes are not passed on to the detriment of the species’ evolutionary future.

This important ‘law of nature’ was applied to all living things that make their home on this planet until the arrival of superpredator, Homo sapiens. In modern man’s short history, innovative thinking has managed to upset the age-old order between predator and prey to such a degree that countless species have already become extinct and many others are heading that way.

When I think about the catastrophic impact we humans are having on the world around us, it makes me feel like a hypocrite to write about how to extract more fish from our already-depleted waters. But despite such misgivings I admit that I am hopelessly addicted to fishing and my only concession to the above is that I generally only fish for food. This pragmatic motivation makes success a key goal of my fishing strategy. To put it simply I do not go to sea to take my lures for a swim, I use them to catch fish. 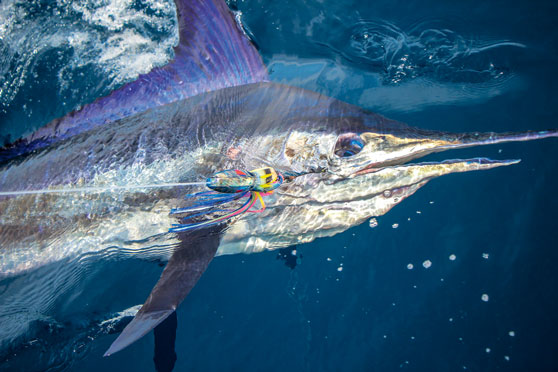 All the good fishermen I know have learned the basics and then built on them. Recreational fishers using rod and line rely almost exclusively on deception to catch fish. For that to be successful it helps to know that fish find food by sight, sound (vibrations) and scent.

All our offerings incorporate one, two or ideally even three of these fish magnets.

Let’s start with sight. Depending on water clarity and light conditions, the distance at which a fish can see a lure or bait varies considerably.

To be seen more easily, lures can be brightly coloured, glow with luminescence, reflect UV or contrast against the prevailing background. They can imitate the colour of the baitfish or go the other way by being so outrageously gaudy that fish want to investigate them as a potentially novel food item or simply chase the strange-looking intruder away.

No matter how cleverly some lures are painted, looks alone are rarely enough to get fish on the hook. Good lures also incorporate flash, activated by erratic manipulations as the lure is jerked, fluttered, yo-yoed or seen to be trying to ‘escape’ at speed.

Most baitfish have silver bellies to make themselves blend in with the silver surface ceiling when viewed by a predator from below. To make themselves less visible from above, their backs are dark coloured or camouflage patterned. 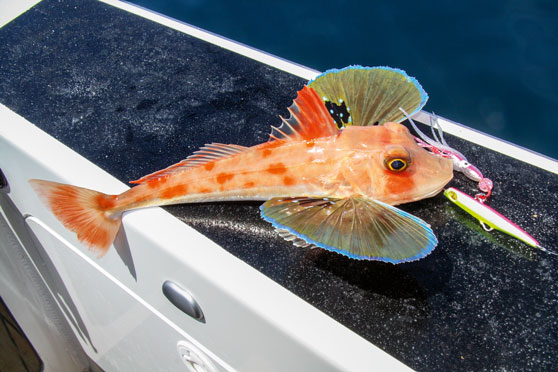 An injured fish, or one that is hooked, will often swim sideways, thereby exposing its silver belly to the light from above, creating a highly visible flash. Just the other day I foul-hooked a large albacore tuna that circled sidewise some 30 metres below my kayak for a good twenty minutes.

At first I thought I was attached to a big kingfish, but the chrome flash gave it away long before I got it to the surface. That flashing, and the unnatural vibrations, would have advertised this distressed fish as an easy meal for any nearby mako sharks. Luckily, I got it on board before such an unwelcome visitor cottoned on.

Sound travels well in water. Sound is really a pressure wave that sets up vibrations as it passes through a medium such as water. It travels four times faster and four times further through water than through the air, so it is not surprising that the ocean is full of sound. 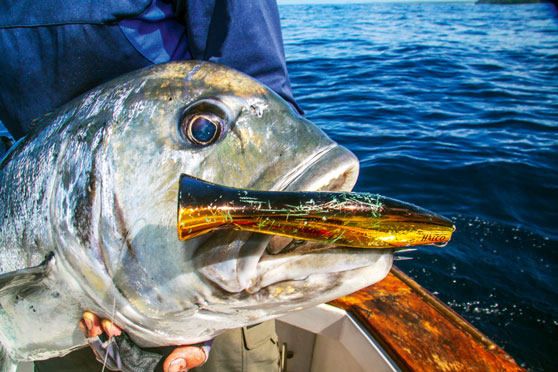 Most sounds in the ocean are generic and become part of the sound background. For sea creatures, it’s probably similar to how we humans perceive the background noise of a city or factory environment.

Although fish have ears, they sense sound vibrations particularly well through receptors located along their lateral line on either side of their body. These allow them to register vibrations that signal danger for prey fish or opportunity for predators.

What really brings lures alive is movement, particularly movement that looks erratic and generates vibrations that suggest fear, distress, injury or simply any indication that contrasts with the ordinary.

The important thing is that fish, with their sensitive lateral line, can detect vibrations long before they can see their potential prey.

I have left scent until last, since its potency as a fish attractant, despite plenty of evidence, is the least understood. We all know scent associated with food attracts fish, hence the popularity of natural bait and berley.

Unlike sound, which moves in all directions, scent from a stationary source is only distributed by current and travels at the speed of the current. However, scent left behind by a moving source, such as a scented lure like a soft-bait or ‘juiced-up’ one trolled from a boat also leaves a ‘scent trail’ that fish can home in on. Of course, the intensity and longevity such a trail will vary a great deal, but it is important to remember that it presents a highway that fish can follow.

I regard scent as the last confirmation after a fish has been closely attracted by vibrations and excited by what it sees. Adding scent to a lure reminds me of the old saying: “If it looks like a duck, sounds like a duck and smells like a duck, then it must be a duck.”

Why then is scent so purposely ignored by most lure makers? Is it because it is difficult to incorporate it in mass-produced hardware or because it is considered less sporting? Over my years of fishing I have definitely observed a trend among lure makes and anglers alike that not only shuns this third and quite possibly most potent fish attractant but has almost elevated its omission to a new religion. Sure, sight and movement alone will attract hits, but you will get a lot more hits if scent is added. 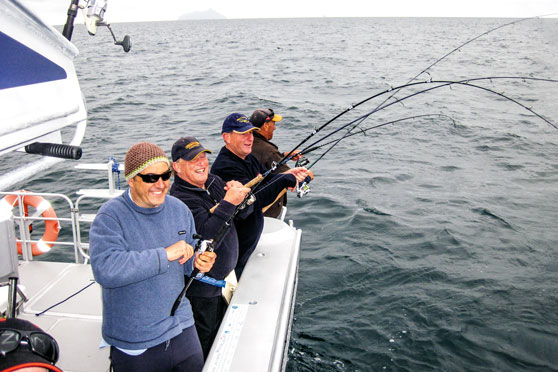 Let’s just ignore the indisputable lure of berley and take the most recent example I saw on the same day as I was battling with that tuna.

We were out in blue water, and reacting to recent reports of marlin captures, my mate Martin Rook carried a big game rod rigged with a full-blown marlinsize plastic skirt containing a footlong ballyhoo baitfish. At 90m we chanced on a big tuna workup. Gannets were dropping like guided missiles into panicking bait fish balled up by marauding tuna.

Martin was closer than me and got there just in time to hookup on his game rod. The fish stripped tons of line, convincing Martin his ballyhoo had indeed been eaten by a marlin. I hooked up just as the work-up stopped and shortly afterwards binned a small albacore. I kept circling the resting gannets but kept in radio contact with Martin about the state of the battle, only to learn that instead of a longedfor marlin, Martin had hooked a XOS albacore. When he finally landed the 9kg fish he could hardly believe that the tuna had scoffed the whole big game lure, including the ballyhoo, and was hooked deep down in the stomach.

In fishing, it is dangerous to say ‘never,’ but in my experience it is highly unlikely that a tuna, or for that matter a marlin, would have inhaled a giant plastic lure pulled lamely at kayak speed without the addition of the real thing that smelt and tasted like food.

Some time ago New Zealand Fishing News featured an illuminating article that contrasted the way Aussie big game fishers generally prefer pulling all sorts of natural fish bait for marlin whereas Kiwi anglers seem to prefer pulling scentless plastic. A generation ago, trolling rigged baitfish was standard practice. Have we got stuck in a conformist rut?

Undoubtedly there are many reasons why people go fishing, but surely the principal reason is to catch fish. In my book the best way to do that is to deceive them with an offering that incorporates sight, sound and scent.