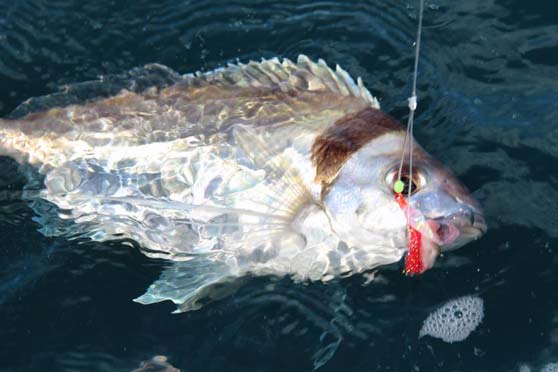 Tarakihi are members of a large family of Southern Hemisphere fishes that includes porae, assorted moki species and trumpeter. In Australia theses fishes are bunched together as ‘morwong’ with our tarakihi usually called ‘jackass morwong’.

There are at least two species of tarakihi in New Zealand. The smaller, common tarakihi (Nemadactylus macropterus) is distributed right around the country and as far south as the Auckland Islands. It is one of New Zealand’s most popular sport and table fish and supports a considerable commercial fishery. Average size is probably nearer one kilo than two, but specimens reach 4kg and heavier.

Another much larger and scientifically undescribed species, king tarakihi (Nemadactylus sp.), is caught in few widely spaced locations, including the Three Kings Islands, Kermadec Islands, East Cape and the Bay of Plenty. King tarakihi are generally found near offshore reefs adjacent to deep water where 3kg fish are common. They may weigh 5kg or more.

Tarakihi are schooling fish usually associated with areas of reef and other structure, though they also feed over sand and mud. They are most often caught in clear patches adjacent to foul and reef in water up to 100m-deep.

Food includes a wide range of crustaceans, invertebrates and occasionally small fishes. Tarakihi can be found close to the bottom, but often feed in mid-water, depending on the food source. Tarakihi schools are easily identified using your sounder.

Tarakihi reach maturity at between 25-35cm in length, so legal length fish (25cm in most areas) may or may not have had the chance to breed. Common tarakihi live to at least 20 years.

Juvenile tarakihi have a deepwater pelagic (free-swimming) phase before moving inshore to nursery areas when they are about a year old. These include the southwest coast of the North Island, Tasman Bay, Kaikoura, Pegasus Bay, Canterbury Bight, Otago and the Chatham Islands.

Juveniles move out into deeper water again at sexual maturity, when they’re around 25cm long. They may migrate long distances with fish tagged in Kaikoura recaptured as far away as Whangarei, Kaipara and Timaru.

Most recreational and commercial fishing for the species occurs in water of moderate depth where the majority of the fish are of legal size.

Tarakihi have relatively small mouths and are best-targeted using small 1/0 or 2/0 hooks. The most common rig is a paternoster or dropper rig with one or more short branches off the main line. The sinker is at the bottom.

Commercially made dropper and flasher rigs aimed at tarakihi are readily available. Many incorporate re-curved or circle hooks, which makes sense in deep water.

Tarakihi will also attack small metal jigs, though they’re often found in water too deep to effectively fish the small jigs attractive to them. The same holds true for softbaits; tarakihi readily take suitably sized baits, but conventional deployment with a jighead is usually problematic.

When using multi-hook rigs, multiple hook-ups are not uncommon, so it can pay to leave the rig down for a few moments after you hook a fish, especially if you’re using circle hooks with their superior holding properties – you may hook another fish or two.

Shore fishers catch tarakihi on variations of flasher and/or dropper rigs, but usually with only one or two branches so that the rig casts well. In some locations, tarakihi are readily available to shore fishers.

While tarakihi will take a variety of natural and artificial baits (softbaits), the accepted wisdom is to use shellfish baits if tarakihi are the target. Tuatua is favoured in northern parts of the country with mussel more popular in the south. Both baits benefit from salting to make them more durable.

Cut fish baits of skipjack or pilchard are also effective, and easier to use, but baits should be small and carefully rigged so as not to choke small tarakihi hooks.

Once a school of fish is located, and providing they’re on the feed, fishing can be fast and furious. The fish are so aggressive that bycatch of other species is seldom a problem. At other times, though, expect to catch a variety of reef species on the small hooks, most of which should be released unharmed.

Tarakihi are good fighters for their size and multiple hook-ups can put a decent bend in the rod. Tackle needn’t be too heavy — six-kilo is ample if you want to enjoy a bit of sport while catching dinner. Superbraid line can be an advantage, affording improved feel and better bite detection.

Tarakihi tend to school in deeper water - 20m or more – and in areas of low broken foul, or off the edge of reefy structures.

Tarakihi can be taken at any time of the day, though like most fishing, dawn and dusk fish particularly well.

The best fishing occurs when there is plenty of tide running. Most anglers fish from drifting boats, but in windy conditions or where tarakihi are very localised, anchoring may work better. Berley can be deployed, preferably down deep near the bottom, but most tarakihi fishers don’t bother.

Tarakihi prefer clear water and will vacate reefs affected by freshwater run-off or dirty water after a storm. They are often found in the same areas as hapuku, which prey on them — tarakihi make excellent livebaits for groper.

You might also be interested in this article on catching tarakihi by Grant Dixon for NZ Fishing News.