Some nice snapper, gurnard and trevs have been caught recently from Pt Halswell to Falcon Shoal, as well as south of Ward Island. The edge of the shipping channel and around the harbour entrance have been going well for some big blue cod, gurnard and kahawai.

It’s nice to see the return of kahawai and whitebait pretty much all over the harbour at certain times. Evans Bay has been particularly busy with kahawai mayhem from the Coastguard building along to Cobham drive and to Miramar Wharf. There's been a nice spring run of gurnard at places like Greta Pt (Niwa) and various other points around the bay as well.

Good cod and teri have been caught between 40m to 100m at most reefy spots. As a general rule, Karori is better for cod and Turakerei is better for tarakihi, along with other places like Baring Head, the Wreck, around the marine reserve and Airport Reef. Fitzroy bay is a nice calm spot for a feed of cod, teri, gurnard and trevally if conditions are a bit rough out wide.

Kahawai, the odd nice blue cod, gurnard and trevally are around places like Fitzroy Bay, Wainui and Pencarrow, while White Rock and 'The Spit' are a good bet for spotty sharks, a possible moki or elephant fish, and a general mixed bag of other ooglies.

There are still some ‘puka getting caught off Makara and Ohau, but the bigger ones are harder to get at this time of the year due to spawning. There have been some good schools of warehou around places like Boom, Ohau, Hunters and Fishermans. Snapper are biting better in the deeper water (over 50m) but there are still some shallower ones, especially from Pukerua Bay northwards.

Plenty of kingies have been hooked out at Hunters Bank lately. It’s been quite productive over the last two winters but of course not every day. The fish tend to be a bit deeper in the winter (50-70m).

From the Shore
It’s a good time to target tarakihi, trevally and warehou on the shingle beaches from Titahi Bay down to Ohau Pt. The odd snapper may still be on the cards.

K‍apiti
The better snapper fishing has been taking place in the 50m+ areas. There are good tarakihi on the south end, as well as kingies to the north.

The new Simrad NSSevo 3s is the next level in on board functionality.... more > 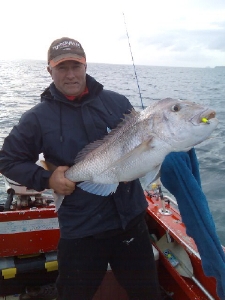 Another tough day at the office - Stephenson's Island