When anglers have been able to get out, the fishing around Wellington has been exceptionally good, reports Pete Lamb.

While the water has been dirty, the results have been slow both in the harbour and around the coastlines, but as soon as it begins clearing up the fish have been on the bite.

The harbour is still fishing exceptionally well. While the action off Oriental Bay for those slide-baiting for kingfish has slowed little, the results are still there for those putting in the time.

Reports suggest the kingfish have moved out to deeper parts of the harbour off Eastbourne and towards the heads. Livebaits are still the go.

Gurnard, one of the best eating fish around, are being caught in good numbers both inside and beyond the harbour.

For those fishing the more traditional spots such as off Mana and Hunters Bank, the fish are still in relatively close to the shore and the foul. There have been some good snapper catches of late, both from the boat fishers in the harbour and the surfcasters fishing the shore in the Raumati to Paekokariki beaches. Those who have been putting in the hard yards after dark off the beaches have been enjoying reasonable success in this area.

The weather has dictated access to the south coast, but when the boats have been able to get out there have been some good blue cod and tarakihi catches not far offshore. A great 8kg plus moki was caught in the last week or so (see above photo) by Lennon Mok. It is currently the Hall of Fame leader on the DB Export NZ Fishing Competition in the blue moki category - an impressive catch indeed.

Groper fishing has been generally slow. Many of the regular and former hotspots have not been producing. Several of the charter boats have been putting the latest electronics to good use, mapping and exploring new territories to put their clients on fish.

There is no shortage of new grounds to explore, but you do need to put in the effort. Once you find a new honey hole, it can be well worth it.

The Cook Strait trench has not seen a great deal of action due mainly to the weather. The odd boat getting out that way reports modest catches of groper, bluenose and gem fish. The best has yet to come of this great winter fishery.

I am heading off to the East Cape for my annual landbased fishing holiday, so hopefully I will have some good news to come from the trip in the next report. 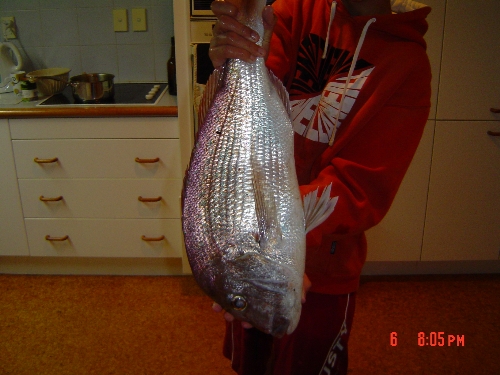