It looks like northerlies for the weekend so today's the day if you want to get out west or brave the swells on the south. The harbour is perfect! Hopefully the 1.5 to 2 meter southerly swell will dissipate over the weekend for surfcasters to go east and south. It looks like medium to strong northerlies through until next Wednesday or Thursday

West - there were plenty of tarakihi around the reefs south of Mana Island last weekend but a shortage of usual plentiful kahawai. We picked up one or two snapper and come trevs and the occasional gurnard. Around Plimmerton, Pukerua bay and Kapiti there were some excellent snapper caught with a few around the 20lb mark. Hunters and Kapiti also produced some excellent kingfish. While trying for the (Mana out wide) hapuka we picked up some very big blue cod and scarpies which were exceptionally good eating. I don't think it will be long before numbers of snapper turn up in our waters as Kapiti and north of there are starting to produce some good early season numbers.

Marlborough Sounds - Good reports of big hapuka and cod at the Brothers last weekend. They normally turn up on the south side of the Strait after spawning.

Harbour - Gurnard galore in Evans Bay. Trevs at seatoun with a few snapper starting to show as well. Some big elephants have been caught recently around Ward Island and Eastbourne. People are picking up blue moki in new places as where there are mussels, rocks and weed its probably going to be moki territory, particularly around wharf structures.

South coast - Big schools of kahawai around in Lyall bay recently and some good cod and teris in the usual 30-40 and 50-70 meter spots. Some kingis have been seen by divers close to shore. Its been good to see the the swell die down to be fishable and diveable over the last week.

Surfcasting - Last weekend it was tough going on the 1st WSAC shore comp with a few spotty sharks and gurnard. Sinclair head to Karori light is normally good for legal bluecod with kahawai, moki and trevally on the cards too. Time will tell if White rock will fire moki and gurnard. Wainui, Fitzroy and Pencarrow are all worth a crack for all of the above species as well. Out west I would try South Makara & Boom for a trev, or early season snapper and some tarakihi and going north of Raumati for some early season snapper.

Its a good time to book in for an October school holiday fishing charter or your Xmas fishing party now. 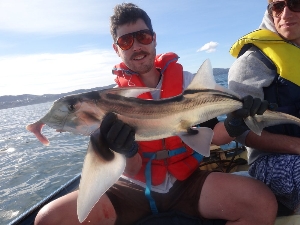