Regrettably, there’s not a lot happening with the very short periods of nice weather, although the weekend just passed - September 17-18 - was a boomer with no swell and very little wind. The Sunday was superb as I was diving at Motiti Island and were able to access the north-eastern side which is usually prone to any swells but none that day.

The visibility had changed quite significantly from the Saturday, when the reports indicated at least 10 meters plus of clear water all around the island. As you all know this can change overnight and it did, with around six metres of milky visibility prevailing – but it was still great to be back in the water again. We discovered quite a few nests of juvenile red crays and some good groups of packhorse scattered throughout the general area down to 25 metres. The north-western ‘top’ part of the island had plenty of mackerel and other small baitfish cruising around in good numbers, with a few small snapper among them at 20 metres.

To the fishing – the deep water still appears to be very hard with some reports indicating bass, bluenose and hapuku are not in the usual old spots. The only success seems to be deeper in around 400 metres, hard work for not much reward was the call. I wonder what has happened to these deep knolls as the former long liners that used to fish them are no longer there, having been gone for four or five years.

If these areas were still good, I am sure the commercial guys would still be there. Personally, I have struggled in the deep water with my charters for the past four years with very limited success. Sometimes a few gem fish provide the highlight of the day!

With the Queen’s memorial day this Monday, the extended weekend weather looks average with the swell forecast to go to two meters late Monday with 15-20 knots south-east offshore, leaving Saturday and Sunday as the best options.

For those not wishing to go far, the Papamoa areas and out towards the Knoll at Motiti are still producing good results, particularly slow drifting with Z-Man soft-baits or anchoring up with plenty of berley to draw fish into your baits. Enjoy it to the full. 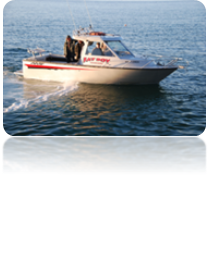