The biggest challenge to harbour fishing this season has been the red weed that plagued us right through summer. While Phil Goff assures us that the Manukau is not Auckland’s forgotten harbour and tests show that nitrate levels are lower than ever, I have to say I’ve never known the problem to be this bad. The red weed is a form of algae and a report I read a while back suggested nitrates were feeding it. Our top local body politician went on to say how you can actually smell how clean the harbour is these days. Come to Big Bay in the height of summer and take a sniff Phil. You could build a mountain out of the stuff that’s washed up on the beach after a big tide.

If you can avoid the weed, however, the fishing is still great. Once it gets on your line, you need to clean it off or you won’t get a bite. Sometimes that means bringing your line in every few minutes. That’s a bit of a chore but you can make things easier for yourself by fishing the slack water around each phase of the tide. Fishing in the shallows also helps as you can get your line in and out of the water very quickly. Luckily, that’s where the fish are at this time of year. Last weekend we caught snapper to 11lb and while we only caught some small trevally, there are some much bigger ones around. Gurnard will start to feature more in catches as the weather cools and their condition will also improve. Kahawai are rather scarce but big fish to 3kg are being caught.

Kingfish are also worth targeting and are very rewarding to catch. A live jack mackerel fished on the bottom can work wonders. Keep the berley going to help draw in the baitfish and the kings and you’ll be surprised where you will catch them.

The west coast is producing some great snapper too and any depth out to 30m can produce on the day. Regardless of where you catch your snapper, they are in prime condition and the gut will have deposits of thick white fat which acts as an energy store over winter. You will also notice a sticky build up on your filleting knife and the blade will need constant cleaning to help it slice through the fillets easily. Make sure you get the most out of your fish by using an iki for a quick death and lots of ice to chill them down. I take a 90-litre chilly bin two thirds full of ice – but I do have an ice maker.

Tuna are still around but marlin numbers seem to be down this year. I help weigh fish for Counties Sport Fishing Club and my phone hasn’t exactly been running hot with requests to weigh fish, especially in the latter stages of the season. They are there of course and it still isn’t too late to catch them.

As always, the most important thing is to keep yourself safe on and around the water, and a close second is to get out as often as you can and enjoy your fishing! 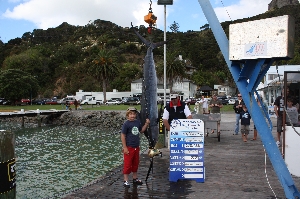