It hasn’t been easy to gauge what is happening lately; weather, shorter days and more mundane life things always tend to get in the way at this time of the year. The bad news is the weather is going to get worse before it improves. The good news is that in a couple of weeks, the days will ever so slowly start to get longer just a little bit at a time. So what does that mean for fishing?

Longliners should enjoy great success in the darker hours off the west coast beaches when there is an easterly blowing and the swell is down. Traditionally this has always been the time for the kite and torpedo fishermen to shine. Especially for gurnard and mega sized snapper.

Boat fishermen will probably do best in close out off the coast. Snapper, gurnard and trevally should feature in your catch. The biggest problem you will face over winter is sharks. Big ones, small ones & spiny ones. They can be a curse. Be particularly careful when it comes to handling spiny dog fish, if you don’t know what they look like, google it now. Grab them anywhere and they will spike you. I deal to these little creatures by putting my foot on their tail, grabbing their nose in one hand while stretching the fish out and removing the hook with a pair of pliers. Nowhere near as brutal as it sounds and if you release them as quickly as possible it will save you a trip to the ER ward. I keep a firm hold on their snout and grab their tail in the other hand. Stretch them out and release them into the sea. Easy once you’ve done it a few times.

If you haven’t guessed by now the harbour is my choice of places to fish over winter. Yeah it still gets spiny dogs but it is also a quick trip to get a few trevally, gurnard and kahawai. If you know how to target deep water foul then you can also catch some spectacular snapper at this time.

Let’s have a look at catching gurnard – because that’s my thing. Firstly, you need to be in the right spot which is usually the transition of the channels where they start to rise up from the depths and where they start to taper off onto the banks. Typically, I’d fish the start of the outgoing or start of the incoming in very shallow water where there is a gut running off the banks. For the rest of the tide I’d be looking for the transition where the channels just start to rise up from the depths. Eight to 12m is usually a good guide.

Keep your baits small. Use a two hook 4/0 recurve dropper rig (or thereabouts – small hooks set easier into their bony mouths) tied so one hook lies on the bottom and the other is about 400mm above it. Don’t strike the bites. Wait for that characteristic nod that gurnard do and after 3 or 4 of those, slowly but firmly lift the rod and crank the handle 3 or 4 times. If you don’t get a hook up drop the gear to the bottom as quick as you can and wait for the next bite.

I ALWAYS put a stray line rig out when fishing in shallow water or at slack tide. Cast it out the back and leave it. A strayline will have a small sinker – just enough to keep the bait on the bottom – and a small sharp hook such as a Mustad Demon 4/0. The sinker should sit right down on the hook with only a lumo bead separating the two. A small slither of bait is all you will need.

I am happy to admit that this report is focusing on gurnard as I am part of a team running a competition called the Franklin Hunting & Fishing Grunter Hunter 2020. This is our tenth year and it has increased in popularity every year from a humble beginning of 80 anglers at the inaugural event to 427 last year. We aren’t going to pester our sponsors (Franklin Hunting & Fishing and Shimano NZ) for prizes this year, instead we’re making it self funding but the more entries we get the more prizes we can hand out. We’re putting all the income into prizes. To look after the resource, we only accept one fish per angler at weigh in. Tickets are available at Franklin H&F or you can email me at [email protected] if you have any questions. The event is run from Te Toro and is only a week away on June 21st.

The fish featured in the pic was one I caught during Level 2 in 3m on the banks of the Parakau & Papakura channels. It was on a stray line rig using a 5/0 recurve hook with a ½ oz sinker. I caught that on the start of the outgoing tide and the bait was skipjack tuna. It was also the only fish we caught in that place in an hour of fishing. It would most likely have won most of the 10 previous events on the day but I didn’t catch it during a comp & I have yet to win The Grunter Hunter, that’s how it is with fishing and that’s what keeps bringing me back. I reckon I have every chance of winning it this year but I’m more than happy for you to prove me wrong! 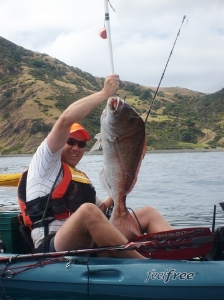