The epic marlin action of a month ago has settled down a little but there are still plenty around. So far a lot of captures are happening off the river bar but like any fish, marlin will go where they want to go. Anglers using Chlorophyll or SST charts appear to be getting the best results and most seasoned game fishermen understand the importance of searching out temperature breaks and current lines. Most captures are still generally from the 100 to 125m depths. Once you find them, tuna can be prolific but my boat spent a solid day out there last weekend looking for a solitary albacore.

Snapper out west are where you find them. When the swells are down then it is certainly worth a look in close but 35m appears to be consistent. Kahawai can make life fun or a pain depending on your point of view but there is no denying a half fillet of freshly caught kahawai makes a great snapper bait. While gurnard inside the harbour are considered a winter fish, you can catch them all year round off the coast and they maintain their condition better than those that stay in the harbour over summer.

The New Zealand Sport Fishing Council are currently running their national competition, fittingly known as ‘The Nationals’ over the last week. It is all about affiliated clubs competing against other affiliated clubs. Points are awarded for captures with higher points going to fish caught on light tackle. That event has kept me busy as one of Counties weighmasters and I’m getting to hear some great stories.

The harbour is really firing at times, mostly when the sun is starting to rise or set. The low light levels make fishing shallow water very effective and I’d be looking to fish no deeper than 5m at those times. Straylined baits are the way to go in the channels. There are still a few gurnard around but snapper & kahawai will be your main catch with a few trevally thrown in for good measure. Kingfish respond well to live baits and jigs and can also be targeted from the shore in many places. While we often fish areas in the Waiuku channel the serious king fish chasers will usually be out around areas such as Destruction Gully.

An unusual catch both in the harbour and off of the coast are John dory. Although I often fish jigs and softbaits, I’ve yet to catch one but they are certainly there. My mate Gumboot and his mate Nick keep threatening to fish out west and show me how, but I reckon they are all talk. Time will tell! 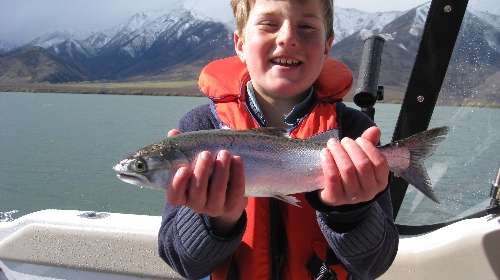