The final month before winter has officially started. On May 1st, it was a cold morning start but the walk to the spot definitely warms you up very quickly. I’d heard the action had been picking up around the Manuka Harbour, so I decided to head out there to do some surfcasting. The weather was average with a bit of cloud and small light showers, and the water was slightly murky. It was perfect conditions for snapper but none were around. Not even the little ones were present to nibble at my bait, which was a shame because it would have been nice to have seen the rods twitching.

I was hoping to get into some gurnard action, but ended up catching the typical winter species: the kahawai and, a favourite species of mine, the silver trevally. The trevally was quite powerful despite only being around over 30cm and pulled drag, but was well and truly hooked on the 3/0 KLT so wasn’t going to get off any time soon. Trevally can be hard to land due to their soft lips, meaning the hook can get ripped off when under a lot of pressure. The bite was short lived after the sun got up, so morning action is definitely the way to go even during winter. One major obstacle that always gives me headaches is when the water is filled with grass weed. Be prepared to wind in lot of weeds caught in your line. The worst period is after a rainy day as the harbour will be filled with debris.

The rig that worked this day was a homemade flasher ledger rig, but for another fisho who was with me, the running rig also worked – although only kahawai found his bait instead of the trevally/gurnard. For bait, I stuck with mullet, although sadly I wasn’t in time to get the fresh stuff so was forced to use frozen bait. Another angler who arrived before us said that he landed three kahawai and one decent snapper. The snapper numbers are dropping, and the kahawai, with less competition, will be the prime species that will end up on the line at this time of year. But I’m still hoping that grunting gurnard will turn up at some point, along with more trevally.

A good tip when fishing the Manukau Harbour is to use bright flasher rigs. Black Magic Tackle produces a great range of colours and sizes so make sure to select the ones that work for you. For landbased, I use the 3/0 Tarakihi Terror and the 4/0 Gurnard Grabber, whereas on the boat, I use the 5/0 Snapper Terror. 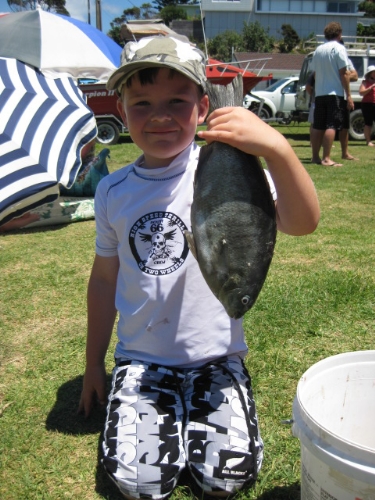