The coast continues to fire, and the fish are where you find them from in close out to 60m. It’s best to fish from an anchored boat and to give it half an hour before moving if no snapper turn up. Two hook dropper rigs baited with mullet are king out there. The skipper of local boat Atiu Lady told me he caught a decent size tarakihi at 60m recently which I have seen a couple of times before and I’m always keen to hear those stories. The day I wrote this, I also heard of a turtle in the harbour!

Pretty soon schools of skipjack and albacore tuna will be showing up. We target them using small tuna lures towed at 6 to 8 knots from a few metres behind the boat out to 30m or more out the back. Then there are marlin, I’m not the guy to hand out advice on those critters but it takes a dedicated approach with real attention to detail for them.

Many people ask about how to target fish – it’s a term that gets bandied around a fair bit and many people are unsure what that means. The harbour has a variety of fish that lend themselves to being targeted. Of course there is always some crossover and you never know what may turn up.

I target trevally using light gear such as a softbait rod spooled with six to ten pound braid with a 20lb leader. I will use a 4/0 recurve hook and a sinker with just enough weight to keep that bait on the bottom. This technique is called straylining. I generally use small squid baits, but other baits also work well. The real key to targeting trevally (or any fish for that matter) though is to drop that line where the fish are. Trevally mostly feed on shellfish, shrimps and crabs. Fishing over shellfish beds works well and I often fish for them on the shallows of the banks of the Papakura channel west of the Tripod. Snapper, gurnard and kahawai will also be caught using this technique.

That straylining technique is exactly what I use for gurnard although I’d also use a two hook dropper rig and would give the squid baits a miss. I generally fish the Waiuku Channel and the other channels down toward the airport, looking for guts that run up onto the banks.

If I am targeting snapper, similar techniques to gurnard apply but I use an 8/0 recurve hook for straylining. To fish the shallows, I prefer to fish from low tide in the early evening as the tides flood up onto the banks as the sun starts to drop. I have found this to be the best way to fish the big tides of the new and full moon. Bigger baits such as a fillet of fresh kahawai cut in half lengthwise works well. Ledger rigs work best in the deeper waters and the structure in the Papakura channel or where the channels just start to rise from deep water are usually successful. The trick (well one of them) to catching big snapper – or any big fish - in the harbour is to rig your baits so they present well in the current and don’t spin around like mad things. Sixty pound trace is our go to for snapper and again we use 8/0 recurve hooks.

Kahawai aren’t fussy at all but they love to take jigs. A favourite way for us to target them is to look for terns or gannets working and cast the lures from a drifting boat. The general area from Mako Point across to Puponga Point and out towards the channel entrance is a good place to find them.

Kingfish can be found on the channel edges and in say, five metres of water we use a six ounce or more ball sinker onto a swivel then a two metre 100lb trace onto a live bait hook with a jack mackerel or small kahawai fished right down on the bottom. In deeper water, a lot of anglers fish around Destruction Gully drifting live baits rigged the same way but in midwater or they will also use jigs. 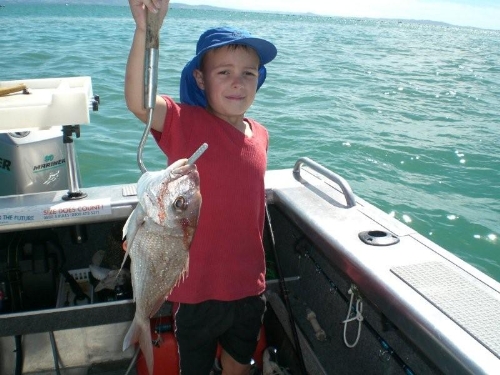