The one thing I love about fishing is when you finally have all the ducks in the row from moon phase no wind and able to fish any chosen spot, and for some reason, it all turns to custard.

Having just come off the boat to write this report, I can honestly say despite all my ducks being in a row it was a very challenging day. To start with I did a drift on the open sand, straylining a pattern of three baits with no sinkers. With very few fish showing on the sounder I was stunned when the first bait got smashed quickly, followed by the next bait and finally hooked up solid on the third bait all at the same time.

As it often happens in winter you catch a couple of fish then it shuts down and this was the pattern all day. Once the tide had turned, I decided to lay up and target some low lying foul – I didn't even have hint of a bite, despite having some delicious-looking piper baits out. It just felt wrong, until a tiny few taps hit one of the lines. When I fish in these conditions, I often flick the bail arm back. This allows the fish to take the bait with little line resistance. After giving them a meter of line they generally stop and chew down on the bait and at this point you have nothing to lose so you strike hard. Three times this happened, all with hook ups, but unfortunately I lost all three on the way up.

After that defeat, I changed tact, moving to an area where the current would be stronger. My theory was that fish will be more aggressive on the bite. The exact same thing happened as at the last spot, except one of the three fish I hooked was a bloody monster. Had I not being focused, I would never believe that a few tiny taps and a slight line movement could be the way a fish of this size was feeding. Again, having landed just the one fish, it went dead and this happened on the next three spots I tried. It sounds a bit weird, but there are times when it can be too calm – chuck into the mix some thick fog and you can really struggle. It's days like this one that you have to go with your gut and pull every trick out of the bag.

When I got home, cold beer in hand, I reflected on my day – my gut feeling put six snapper up to three-kilo into the bin, and I think that no matter where you fished, you'd have experienced the same.

A few mates that fished the Noises over the past week all reported good results, with snapper in the 3-4 kilo range. They said you had to get the wind and tide direction right and then just target the one spot using berley, ground bait, and patience – make a game plan and stick with and you get the results which is totally opposite today. You may have noticed the roes in our Hauraki Gulf fish are starting to fatten up and before long the snapper will start moving in from the deep to prepare for spawning. It is August/ early September when a heap of big male snapper will show up around the Ahaahas area for a short while before moving on and dispersing but where they go nobody knows.

The good thing is that it appears that everyone that makes the effort to get out this winter is being rewarded and it is only by spending time on the water that you will get the knowledge and experience to run with that gut feeling.

A couple of spots that have really produced some good fish (as you would expect at this time of the year) recently are in Area 3 Spot 13, and Area 5 Spots 10 and 13 – check them out in my book, Hauraki Gulf Hotspots, available at www.nzfishingnews.co.nz 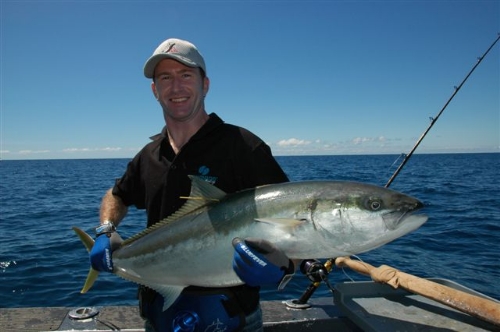