Finally we have had a long weekend with a weather window that has let every man and his dog get out on the water for a fishing fix.

Reports from all around the gulf have come in reporting some awesome catches. To the north there have been big work ups from Little Barrier south to Tiri, with a few starting to move further south to the worm beds. Closer to town on the northern side of Rangitoto on the spoil ground you will find good numbers of snapper in the current in 8-12 metres. Snapper up to 65cm are being caught in the Rangitoto Channel from Coastguard Bay south to Flax Point, and the bigger fish are mainly being caught on fresh jack mackerel or strip baits of kahawai. The Barges has been very consistent but you do need to have a good berley trail and fish the one spot over the whole tide to get the best results.

Administration Bay and Gardner’s Gap have also really fired for me. The advantage of targeting this general area is that there are so many spots close by, so if the wind changes, as it has on several occasions in the last few days, a quick shift puts you back on the fish. Area four along the western side of Motutapu is producing some awesome snapper when the current is at its peak.

Out at the Noises it’s been a matter of just taking your pick of the spots. If soft-baiting is your thing, work the drop off in around 20-22 metres off Zeno Rock. It’s well worth a look in the channel between the Noises and Takapu Rock.

A lot of snapper have now moved into the Crusoe Channel and a mate of mine who would have trouble catching a fish on a trawler managed to catch some really nice snapper at Hooks Bay. It is a bit early but for the soft-baiters, it’s well worth having a drift to the south of Park Point in the deeper water on the incoming tide as a mate plucked six nice snapper and a few trevally here.

I know it’s tempting when the fishing is so good to take your limit but every fish taken now is one that will not get to breed, so please think of the future generations and just take what you need for a feed.

Beginners luck paid off for Rolleston women Vicky Van Der Zwet when she caught her first ever salmon the last weekend in November....... more >

Shimano’s new flagship heavy jigging reel has finally hit the market and exceeds the legendary reputation of its predecessor...... more > 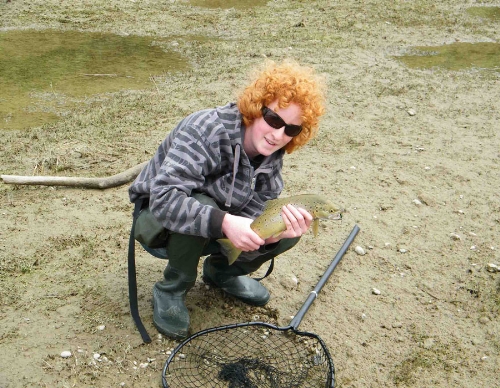