Nirvana-style workup fishing tales abound but sometimes early advice can be a bit of a red herring. Diving gannets don’t necessarily mean you will be loading the bin with monster snapper, but it does mean gannets are trying to eat baitfish which is usually a great start. Workups without dolphins to hold the bait school can be ‘empty’ for instance (among other reasons), particularly at this time of year –  so yes, there are workups, and then there are WORKUPS! There has been fast, furious bird action out straight east of Kawau and just out north of Waiheke, but as I say, fast paced workup activity and lots of movement can mean ‘no fish here.’

Dolphins have been on the charge, with big pods making a lot of splash while jostling for position around the gulf. They’re quite eye catching but usually this means they’re not likely to feed. They do have the occasional fast food stop off, perhaps on a road trip to the Far North for monster 25lb snapper?

The full moon threw its curve ball again; some did well, but most had to put in the big effort. This reaction was well observed over much of the eastern coastline of the country this past several days, right up and down the coast. Out wide, some big snapper have been caught, and the Firth has also seen a stonker or two landed, along with a fair bit of head scratching to find fish.

The 50m line is doing well. Kings, cod, solid snapper and the occasional sea-monarch, the beautiful gurnard, have all been caught.

Colours can make a world of difference, but that can change too. Okay, so the darker coloured Engine Oil Livie, for instance, is easily a go-to favourite, particularly in Northland for big snapper. But orange soft-baits like the Glowing Gurnard are prolific fish catchers the majority of the time. Similarly, smelt-white soft-baits have held first place on many occasions. Working out which works for you is half the fun.

Not sure whether the bite is on or off? A good inchiku lure that flutters and rocks on the descent with erratic skirt flicks, strong twin stainless steel hooks and a high deployment speed will be the litmus test! For instance, The Boss Squid hybrid inchiku, designed and developed in NZ, is a unique and highly effective lure design – tie the leader to the big head end of the lure (not the solid ring of the hook). 20lb fluoro is a good starting point. If out in 50m, expect kingfish hookups, even when fishing for snapper – the rocking motion does the trick on the drop usually. Like with most inchikus, let it freefall to the sea floor, but be ready to strike any sudden speeding up or slack line! The action is largely up to you. Vary your rod lift in terms of speed and height, use small flickers, and then a steady retrieve – and always be ready! Have a look at the “How to fish Inchiku”. A well designed inchiku lure is highly effective, economical and so much fun to use, particularly when primarily targeting snapper!

If the wind swings to the east over the next few days, the spring action could be a Van Halen like eruption. If the weather doesn’t ring true for you, later in the week looks promising. Fortune favours the bold – go fishing and enjoy living the adventure, whatever fishing fortunes unfold. 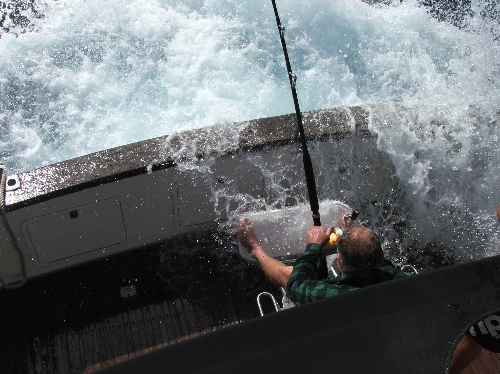