There is nothing like experience when the electronics turn to custard.

Having just had a number of pre-summer servicing things taken care of, it was good to finally turn the key and shoot out with a bunch of South Island friends for a wee competitive contest between three boats. Halfway across the Rangitoto channel, however, my electronics went down and when re-booted, I could only get the chart plotter screen up. As I was close to my chosen spot, I decided to anchor, but found I had no power to the electric winch. For the last few months, a spot we call “The Barges” has been consistently producing good numbers of snapper – mostly 2-3kg but a few up to 6kg. The bottom is flat muddy sand with small lumps of low foul scattered about with a depth of 7-10 metres. The way to look for fish here is to do short zig zags (30-odd-metres) as you slowly work your way up current. When I see bits of low foul and a reasonable number of fish marks close by, I anchor ahead of the fish so that I am casting baits back to the sign rather than fishing directly below the boat. With the wobbly pot set around a metre off the bottom, the berley trail spreads further back in the current than if it was right down on the bottom.

Watching the current line angle along with the wind direction, we manually dropped the anchor so the stern of the boat lay at an angle which minimised tangled lines as I had four non-fishers to deal with. Now, the deal was that the certain unnamed so called “gentleman” who organised the competition was to supply all the bait and berley. It was kind of strange how he ended up with two berley bombs and extra bait, and all we got was a couple of kilos of squid and soft pilchards. Ground baiting is the next best thing to berley, so I cut the tails off all the pillies and periodically tossed a few over. I then cast lightly weighted baits as far back from the boat as possible, staggering them to avoid cross overs and tangles.

Teaching people who have never fished before is a lot easier than teaching those who have done a bit of fishing as there are a few very simple things anglers can do to not only hook the fish, but also to get it to the boat.

First, it is imperative to hold the rod low so the tip is pointing in the same direction as the line in the water. With the line over your finger, you will be able to see and feel any line movement. When you do notice the line moving, wait until the line straightens out before you strike – with the line tight the strike will set the hook rather than just prick the fish. Strike hard and fast and wind at the same time to take out any slack line and keep the hook set.

For the first half of the tide, we hooked a number of snapper in the 2-3kg range, so had enough fish to feed the troops. From then on, we released anything smaller than 35cm. As the tide dropped off, so did the bites. With no power to the winch, our options were limited, so I removed the small sinkers to allow the baits to be cast further out to the side of the boat. With no sinkers, the baits sunk down with the slight current, and then ended up back towards the stern of the boat, so they were covering more ground. We had caught a couple of small kahawai and had cut them into strip baits. Being tougher, they remain in place after the small fish have had a go, which gives time for the larger fish to strike.

Long story short, it was great to get back to basics, set a game plan, stick to it and come home with a dozen nice fish, despite not having enough bait or any berley. Cleaning up the competition was also a nice bonus.

From what I am told, there are good numbers in the Rangitoto, Rakino and Crusoe channels, and on Park Point, the Noises are firing in around the 20-metre-mark, so it’s all looking good – but remember, take what you need for a feed and let the rest breed. 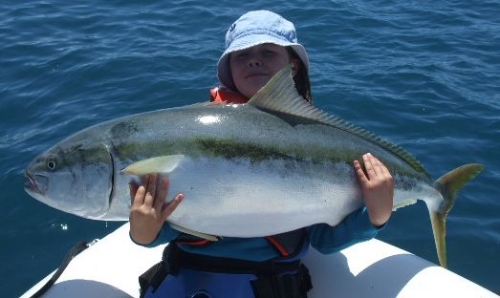