If this is winter, then bring it on! The snapper are in prime condition and full of body fat, making them perfect eating whether baked, smoked or fried.

Over the last couple of weeks, both the air and sea temperatures have dropped, forcing changes for both ourselves and the snapper.

The days are colder and we are no longer out on the deck at night barbecuing in shorts and tee shirts. Instead, we are inside a warm house eating roast and stews. Snapper are no different to us as their habitat and eating habits have also changed.

Over the last few weeks, there have been dramatic changes as to where the snapper are holding in the inner gulf. Fewer snapper are in the channels or out on the open sand and a lot have moved in closer to the reefs and rocky shorelines where their food scourge is limited to crabs, snails and the likes. Over the winter months, never forget the saying, “Habitat is where it’s at”.

This applies to most areas of the gulf. For example, look at your chart at the northern side of Rangitoto from the light house east to the end of the dumping ground. From the bottom shore out is low broken foul; further where the bottom drops off to around twelve metres, it’s mud and sand with lots of low rubble. This area holds a vast amount of food and shelter for the resident winter snapper. Often, you’ll find the snapper move out from the kelp to where the current is stronger to feed on shellfish that live in the muddy sand. It always pays to check out the whole area. Start by sounding out in the current and work your way back in towards the shore to get an overall idea of where the fish are.

No matter where you are fishing around the coast to target the resident winter snapper living in the foul, you need to get your ducks in a row; that is to say, you need to have the wind and tide going in the same direction to allow the berley trail to flow over the area you are casting into.

As a west to southwest wind is best to target the northern side of Rangitoto, you need to fish it on the outgoing tide. I have done very well in spots 4, 5, 6, and 7 (Hauraki Gulf Fishing Hot Spots) in the last two weeks. Two spots that have also been holding some really good fish I have targeted when there has been an east to north east wind and an incoming tide are Area Five, spots 19 and 18.

When snapper are feeding on shellfish, the bite is somewhat different. You will only feel just small soft bites until the berley trail really kicks in. Small bites do not necessarily mean small fish, however, as it’s just the way snapper pick up and chew on the bait. Over time, the berley trail and ground bait will draw more fish into the area, and then they will become aggressive as they compete for food. It really pays off big time to use fresh bait with a flasher rig. Big, fresh, firm baits will always catch the bigger fish.

With a lot of snapper making their way out from the inner gulf to deeper water, the Noises’ vast area of foul will hold good numbers of resident winter snapper. What makes the Noises special is that no matter which way the wind and tide are going, there are loads of spots to target. Just set a game plan to fish the one spot over the whole run of the tide. Again, just get your ducks in a row to fish wind with tide, and then berley up and catch fresh bait. Even if the fishing is slow, stick to the one spot rather than moving from spot to spot as it is the only way to learn about each spot. Believe me, over the run of the tide the berley and ground bait will draw the snapper into the area.

Each day at the Hutchwilco Boat Show I am giving seminars with a power point presentation on targeting winter snapper and on how I fillet and cook the catch, so come along and say hi. I am happy to spend time helping you to improve your catch-rate. 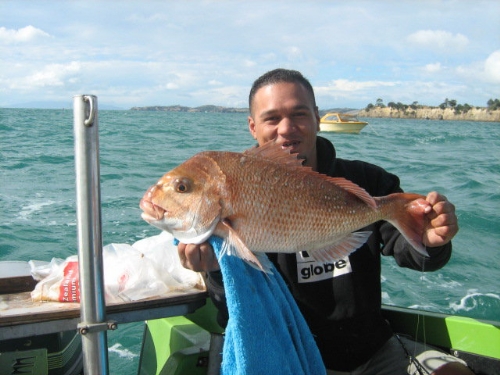 my mate steve and his biggest snapper yet - auckland.lol